Gabba groundsman Kevin Mitchell to step down: Long-serving Gabba curator Kevin Mitchell, who has prepared pitches at the Australian cricket fortress for over 30 years, has said he will step down after the series-opening Ashes Test. 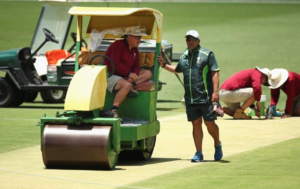 The Brisbane venue has long been acclaimed for the quality of its pitches, which invariably offer pace and bounce for fast bowlers, turn for spinners and the possibility of big totals for batting sides.

‘I’d taken a step back from the physical side of work and engaged in more of a guidance role with the team to see out my contract while helping to recruit my successor,’ Mitchell told Brisbane’s Courier Mail.

‘I want to thank the grounds team for their continual efforts to meet the high standards required and maintaining the culture of having great pride in producing quality playing surfaces.’

Queensland sports minister Mick de Brenni paid tribute to Mitchell for laying the foundation for some of Australia’s most dominant performances.

‘Kevin truly is an icon, and to have kept producing an absolute world-class deck on a ground that’s used all year round has taken a particular talent. So, absolutely, very, very big shoes to fill,’ he said.

Mitchell learned under the wing of his father and former head groundsman Kevin Mitchell Snr, who tended the grounds from 1975-89 before being succeeded by his son.

‘The great West Indies side were out in those days with the four big quicks and Clive Lloyd, Viv Richards and the like… and I just thought, “what a great place to work,”‘ Mitchell said in comments published by state broadcaster ABC.

‘The Gabba is a famous, iconic, historic stadium, and you feel that responsibility to create something that Queenslanders are proud of. You have to love the job – it’s a big part of your life.’

Australia have not lost a Test at the Gabba since 1988, when they were beaten by West Indies, and only two of the last 13 matches have been draws – a sequence that has seen the ground garner the nickname ‘The Gabbatoir’.

England opening batsman Jonathan Trott’s struggles against the short ball at the Gabba saw him promptly exit the tour with a stress-related illness and Australia went on to whitewash England 5-0.