Galway Bay’s New John Deere Fleet: Designed by Christy O’Connor Jnr, a former Ryder Cup golfer, Galway Bay Golf Resort at Renville near Oranmore is not a links course, but is described as ‘parkland by the sea’, with the stunning backdrop of Galway Bay and the rugged curves of the Atlantic coastline always in sight.

Earlier this year this championship course hosted the Carey Cup, a tournament that pitched Ireland’s best amateurs from the Golfing Union of Ireland (GUI) against some of those from the USA, representing the Metropolitan Golf Association of New York (MGA). 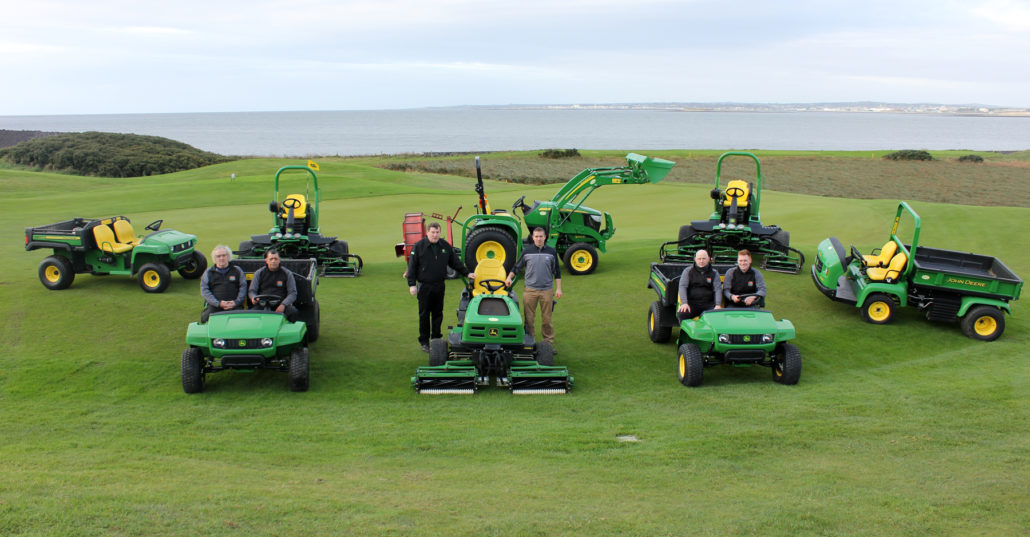 The resort has also recently been recognised both on and off the course with two awards, one for Best Customer Experience Golf Course in Ireland at the 2017 IGTOA Awards run by the Ireland Golf Tour Operator Association, and Best Golf Club Restaurant in Connacht at the YesChef Awards.

Course superintendent Damien Coleman, who is the current president of the GCSAI (Golf Course Superintendents Association of Ireland), gained further special recognition for the club last year when he was one of three European greenkeepers selected by the R&A to join the team of 46 worldwide volunteers that worked at the 2016 Olympics in Brazil.

“The Olympics was a once-in-a-lifetime opportunity and a great experience both for me and for the club, even though I was gone for three weeks at the height of the summer,” says Damien, who has worked at Galway Bay since 2008. “The director of the club Ronan Killeen was still very happy for me to go however, especially as it brought the course a lot of positive media attention.”

With the club approaching its 25th anniversary in 2018, it decided that its ageing John Deere course maintenance equipment fleet needed replacing. Many of the machines had been acquired over 10 years ago in the club’s first substantial deal with local dealer Mid West Mowers at Glasson, near Athlone in Co Westmeath, and Damien Coleman was happy to negotiate a new package with the same dealer.

“We’ve been dealing with Ger Conway of Mid West Mowers for a long time, so we’re very familiar with John Deere equipment and the service we can expect in this area,” says Damien. “Ronan Killeen quickly accepted that the existing fleet was getting too old, and so didn’t need much convincing that it needed replacing.

“At around the same time we were impressed by a John Deere regional presentation on financing new golf course equipment purchases so the idea gained some traction, and we eventually settled on a Bank of Ireland financed package deal in spring of this year, basically replacing like with like in the fleet. All the main machines needed upgrading to take advantage of the latest technology and warranty benefits, plus we had a preference for the selected machines over what else was available on the market.”

“We’ve always had John Deere tractors, as they’re very reliable and long lasting, and they’ve certainly stood the test of time on this course – we have a 5415 utility tractor and a 3720 compact from the original deal, and they’re still going strong. Earlier this year I also attended a machinery demonstration at Dromoland Castle Golf Club in Co Clare, where I saw the new A Model mowers working for the first time, and on the back of that we decided to include the 7500A fairway mowers in the deal,” adds Damien.

“I was particularly impressed with what this mower’s smart technology can do, using the programmable TechControl display. We always set it to suit the conditions, especially in the summertime when the grass is quite heavy and we like the operators to slow down a little, to give a consistent finish.

“Our equipment manager Jonathan Stace also keeps all the kit in very good order. We maintain a small stock of parts at the course, but if we need anything, we know we can order it today and have it delivered tomorrow – the John Deere and Mid West Mowers parts service is excellent in that respect.”