Golf Bunkers Made From Crushed Beer Bottles – A Taranaki golf club has hit on a novel way to promote the game and encourage more memberships. 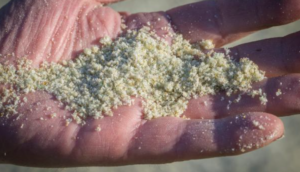 “It just seemed like a cool thing to to do to have bunkers with glass sand in them,” he said.

It also fitted into a new direction the club is taking to encourage new members, which include dropping subscriptions, and introducing more younger players to the game.

Waite said the brewery had provided the sand and organised it to be trucked down to the golf club.

“We’ve never had a sand bunker before and the new committee decided to do something different.

“After we rang DB it all happened pretty fast.”

The majority of the 300 club members have supported the new glass sand bunker layout, he said.

“There was some uncertainty at first but the committee thought it was worth a crack.

“Our members have always struggled in the past playing out of bunkers on other courses.”

“It is an easy walk and has reliable weather conditions,” he said.

“Now the bunkers will now give the players a bit more of a challenge.”

There is between 300mm-400mm of glass sand in each bunker, enough to get a good lift on the ball, he said.

“We’ve revetted the faces of the bunkers to make it a bit more of a challenge to get out of.”

Adding the strategically placed sand hazards had improved the course overall, he said.

“We’re not blessed for length on the course so the next best thing to do is getting golfers to think more about their shots, and the bunkers do this.”

Squatriti said the sand was firm with a “fluffy” feel to it.

“The only time we can’t play on it is after a heavy frost when there is a hard layer of ice sitting on the top.”

Sand was facing a global supply shortage due to huge growth in construction in the Middle East, China and India.

“Most of our empty bottles are recycled into new bottles but we wanted to find a use for the bottles that cannot be re-used and go to the landfill.”

Crushing unwanted bottles to produce fine glass sand seemed to be the best option, he said.

Kaitake Golf Club was the first club to contact the company to use the crushed glass sand after the advertising campaign in January, he said.

Since then more clubs have shown interest.

Crushed glass sand has been used under the grass turf at Trafalgar Park in Nelson, and under vineyards in Canterbury.