Groundsmen Get Their Pants Back: “Sri Lanka Cricket regrets the unfortunate incident that you had to face and we will ensure that it will never happen again” said Ashley de Silva CEO of Sri Lanka Cricket addressing the groundsmen contracted for the three ODI’s between Sri Lanka and Zimbabwe. 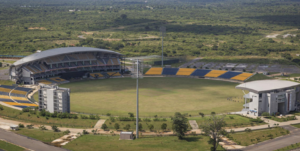 The one hundred groundsmen were compelled to hand over their pants before collecting their wages. There was huge uproar when Sri Lanka were humiliated at the hands of Zimbabwe in the fifth ODI when the groundsmen who were at work at the Mahinda Rajapaksa International Cricket Stadium (MRICS) in Hambantota, were forced to strip off their pants, which were branded Sri Lankan Cricket, trousers provided by the board. Authorities demanded that they had to remove their work pants hand them back to the authorities if not they would not be paid.

Explaining the experience one worker said “They only paid us for our three days worth of work after taking our clothes. They hadn’t told us to come prepared with another set of clothes. They asked us to hand over the trousers, so we had no choice but to do that” .

However yesterday the matter was settled and SLC CEO Ashley de Silva said “You have been contracted by Sri Lanka Cricket before and we hope you will support us in the future too” while handing over a new track bottoms and t-shirts and Rs 2000 to each person. Ninety two of the One hundred groundsmen contracted for the Sri Lanka -Zimbabwe ODI matches played at MRICS Sooriyawewa were present.