‘I’m much more worried about you’: Jim Dawson speaks candidly about how stress got too much – and how support was quickly forthcoming.

Jim Dawson has been a Liverpool supporter since he was a boy growing up on the Isle of Bute. He’d taken his dad’s advice not to align himself to either of the Old Firm, and with Kenny Dalglish having recently moved to Liverpool it was the Reds who became his team from then on. 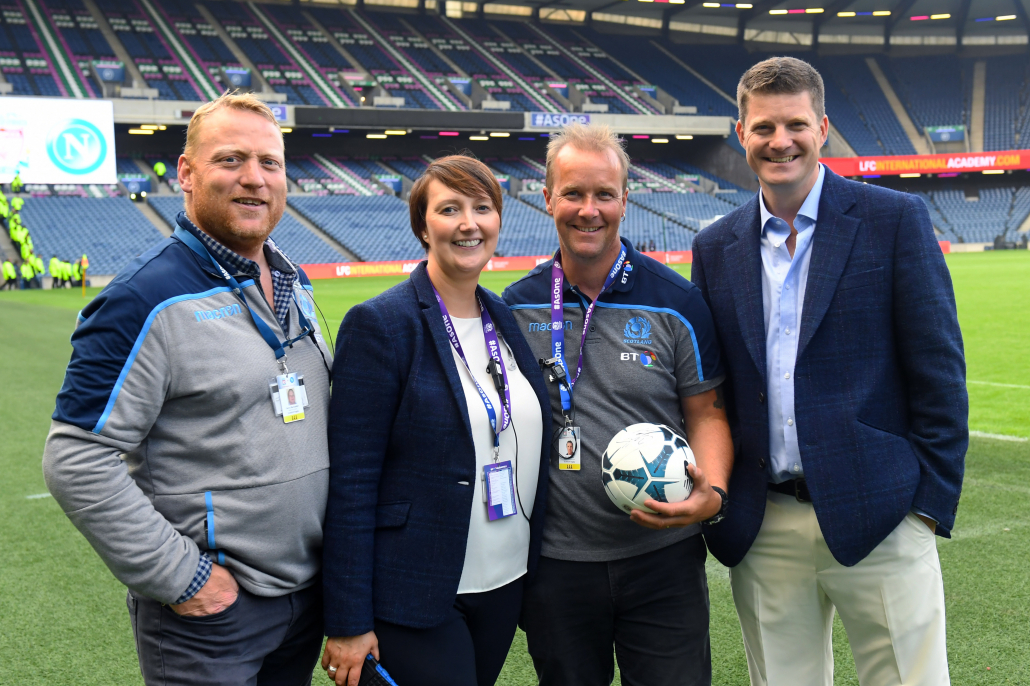 2’I’m much more worried about you’

So there was huge excitement when his beloved team, recently crowned European and World Champions, were scheduled to play a friendly match against Napoli at BT Murrayfield in July 2019.

BT Murrayfield got the call as a result of the pitch at Anfield being renovated, and delays to the completion of the second option, the Tottenham Hotspur Stadium.

“I was one of the most excited people at BT Murrayfield when it was announced,” recalls Jim, the IOG Groundsman of the Year in 2015

There was just one issue. A Spice Girls concert was due to be held at the Stadium, and then the pitch was going to be renovated by Premier Pitches, with the big match five and a half weeks later.

So, while The Spice Girls were doing their stuff on the stage what Jim wanted, what he really, really wanted, was a bit more time to ensure that the pitch was in perfect shape for his heroes.

“Premier Pitches did a first class job, but I was so keen that the pitch be perfect that I was checking the pitch every day and, to me, the seed wasn’t coming through fast enough.

Even the reassuring words of his Deputy, Alex Latto, weren’t helping, and Jim was just getting himself more and more worked up.

“It all came to a head. I think it was week three. To me, it wasn’t coming through and thickening up and we were having the Champions of Europe – World Champions – my team, coming to play on my pitch. People like Virgil Van Dijk and Andy Robertson.

“So many thoughts were going through my head. It was just building and building. Normally, I’d go in and make myself and Kenny Scott, the Facilities Manager, a coffee and we’d go through to the bothy,” recalled Jim.

“On this day, I just went through to my office and shut the door. Kenny asked if I was ok and I said that, no I was struggling. So, we had a chat and then a walk over the pitch.”

Kenny reassured him that his pitch was fantastic, while, at the same time, Jim was explaining where he could see all the faults.

“We then sat in the stand and I talked through everything with him. I was in tears,” Kenny, an ex-Army man, explained to Jim that it was as though he was on a march, carrying a rucksack, and picking up everyone else’s troubles.

“He said that I just wasn’t flinging them back off again. It was a good thought.” What happened next is a gold-plated example of best practice for any mental health sufferer and any organisation with an employee who comes to them with a mental health issue.

Jim decided to speak with the HR (Human Resources) Department, where, again, he broke down in tears. He was taken into the Board room where he explained everything and how it was affecting him.

He then asked if he could speak with Dominic McKay, Scottish Rugby’s Chief Operating Officer.

“Within five minutes Dom was with me, and I told him all my worries about the pitch and my concerns about whether it was going to be ready.

“The one thing that really changed my thinking was what Dom said to me.

“He said that they could play on sand for all he cared and that he was much more worried about me and your mental health. He then asked what he could do to help,” revealed Jim.

“That one sentence took the rucksack off my back and I was able to calm myself down. Dom has a great manner, and an ability to make you believe that your problem is his problem. He has a way of talking to you which makes you feel good.”

After talking to Dom, Jim returned to HR where he was asked if he felt that he needed to see a specialist.

“I said that I thought that I still needed some help so within an hour I was sitting in a consultation with a psychiatrist. That’s how fast it was from me breaking the news to them and me seeing someone. That was the level of support that I had,” said Jim, who had his only other episode in 2014, equally well dealt with by Scottish Rugby, when the catalyst was the nematode infestation on the BT Murrayfield pitch.

Once he’d had his talk with HR and Dom, Jim then went to his own team and explained everything and what was going to be happening.

“They were right behind me. The whole team here at BT Murrayfield have each other’s backs which is a big thing. We are always there for each other. Even young Callum, who has come through our ranks wonderfully, often asks if I’m alright and if there is anything he can do for me.”

Scottish Rugby booked Jim a series of consultations, where he was able to talk through how he could better manage his feelings.

“Some people need to take medication for mental health, but I was one of those who didn’t. Talking to people helps me get through my mental health issues,” explained Jim.

To assist with the process, he went to Turkey on holiday for two weeks, leaving Alex to tend the pitch towards its inevitable high standard in time for the match.

“I didn’t take my phone and didn’t have any contact with work while I was away. I flew back into Scotland on the Wednesday before the Saturday match and Alex had done a fantastic job while I was away. The pitch had come together at the last minute.”

The day of the match is something that Jim will remember for the rest of his career.

“It was an absolute pleasure to go out and cut that pitch for those guys, knowing the quality of player who was going to be playing on it.”

The cherry on top came after the game while Jim and the team were doing their divoting.

“I was radioed and asked to go to the tunnel. When I arrived there was Dom, along with one of the Liverpool executives, and I was presented with a football, signed by Jurgen Klopp, to thank me for my efforts.”

Jim continued his consultations after the game, but the specialist said that they could see a change in him.

“They saw a happier human being. But I already knew that I was feeling a whole lot better with the pressure of the match over.”

For a man who is used to his pitch being played on by rugby superstars and seen by 67,000 supporters and millions on television it does seem strange that the change in ball shape resulted in such stress.

“Doing international rugby matches is just second nature to me and those people who come and lend a hand on match day are just blown away by the experience but having my own football team – Champions of Europe and Champions of the World – come to BT Murrayfield, meant everything came together and I just couldn’t handle.”

So, having been through the experience and come through the other side what advice does Jim have for other groundsmen or greenkeepers who might be struggling to cope?

“The hardest thing is to acknowledge that you have an issue, because you can think that you are admitting defeat. Sometimes you just have to say to yourself that you need help.

“People deal with things differently and some are able to manage their own aspirations, but I think it is always good to talk to somebody. It might be that you are the one helping them the next time,” explained Jim.

Eighteen months on Jim is feeling back to his best and getting ready for another Guinness 6 Nations where he will be preparing the BT Murrayfield pitch for the visit of Wales, Ireland and Italy.

And that Jurgen Klopp signed football? Well, that has pride of place in the Dawson home – sitting proudly above the fish tank.