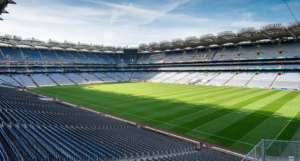 Dublin ran out comfortable nine-point winners against Kildare, but lost free-taker Dean Rock to a black card for a hand trip on Keith Cribbin in front of the Hill after 24 minutes.

When he was quizzed about Rock’s dismissal, Gavin noted the pitch wasn’t in its usual pristine condition.

“That part of the pitch was replaced from the concert last weekend and it wasn’t great now for both teams, and it’s probably something the GAA need to have a little reflection on,” he told Newstalk’s Oisin Langan.

“The groundsmen did an excellent job, an outstanding job actually, to turn it around so quick but going into a provincial final is that the right thing to do to be replacing that part of the pitch, probably a fifth of the pitch?”

The Dublin boss pointed out that players from both sides lost their footing on that end of the field on multiple occasions during the game.

“I could see both sets of players slipping in that part (of the pitch),” he continued. “It was very hard, that’s one thing I’d say about it.

“It’s not a fault of the groundsmen – they were put in a situation to turn the pitch around – so it’s probably for the management of Croke Park to have a look at it.

“A provincial showcase football game in Leinster, is that the right thing to do?”

Not long after the Dubs rolled out of Croke Park, the groundsmen started digging up the pitch again for the U2 concert which takes place on Saturday night.