Jurgen Klopp bemoans Anfield’s pitch after third successive home game without a win. Liverpool made it three home games in a row without a win, held to a 0-0 draw by Southampton for the second time this season. 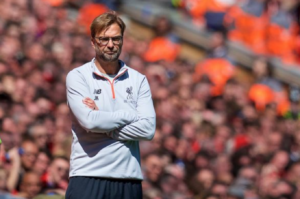 Jurgen Klopp admitted post-match his frustration at the result, but insisted it was a point gained in the race for the top four – a race which still remains in the Reds’ hands thanks to Arsenal beating Man United.

Liverpool’s home form though, failing to beat Bournemouth, Crystal Palace and Southampton in consecutive games at Anfield, is a major concern for supporters.

Klopp also highlighted how dry the Anfield pitch was – a pitch that was due to replaced two years ago but has had to wait due to the ongoing construction of the new Main Stand.

“Today the pitch was really dry. We gave all the water we had and after 15 minutes it was really dry. It was difficult and with a lot of passes you could say, ‘Why are they playing this?’.

“In a home game you have to have the best circumstances but we couldn’t have this.”

Liverpool, despite their poor form since January, are still two wins away from qualifying for the Champions League – away to West Ham and at home to Middlesbrough.

Meanwhile, Anfield’s pitch will be replaced this summer. In the last two years it was only re-seeded due to the access required by cranes while the new Main Stand was built.

Brendan Rodgers frequently bemoaned the pitch in 2014/15, once describing it as “awful” and saying: “It is an old pitch that has not been upgraded for some years and it can be a disadvantage for us. It is difficult to play one-touch football on it.”