Pellenc is the way for Border Lawns: Angus Roberts believes he has an opportunity to make his new business – Border Lawns, stand out from the competition and he claims that his recent investment in a range of Pellenc products will certainly help his cause.

Angus recently announced that he was stepping away from greenkeeping to set-up a new landscaping business called Border Lawns in Scotland. He admits to it being not without risk though, especially as he held a prominent position as the deputy course manager at the Roxburghe Hotel & Golf Course. However, with youth and experience on his side, it seems a logical decision – even more so when you refer to his already impressive CV. 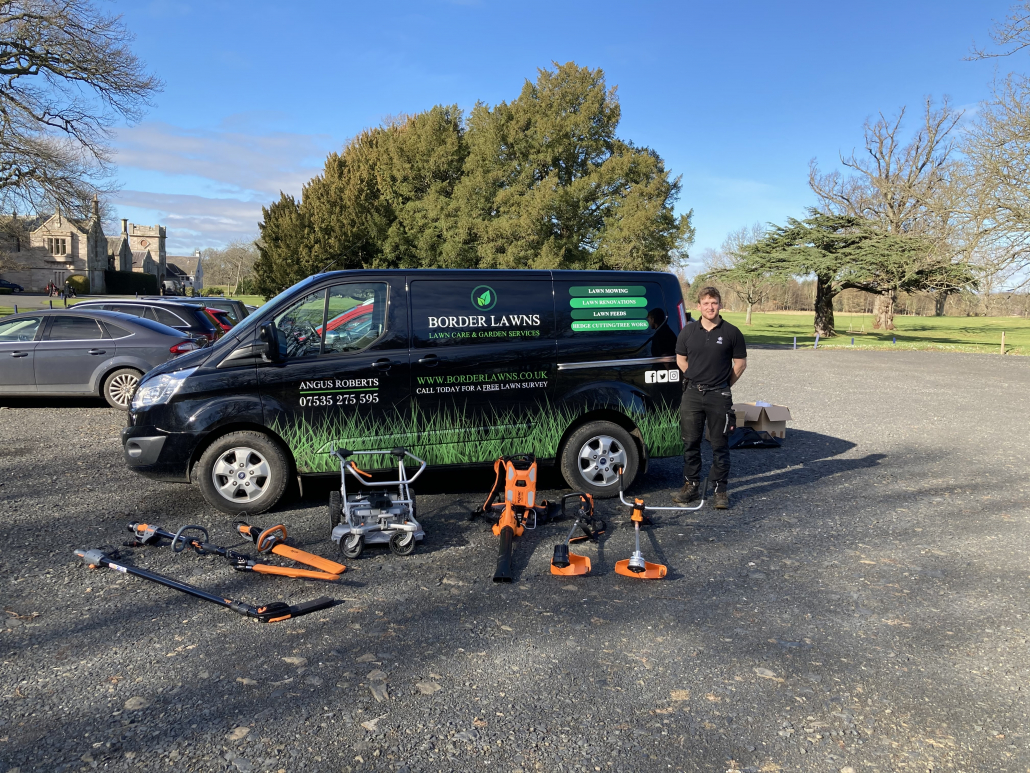 Angus left school and began an apprenticeship at the Roxburghe in 2017 but he got his first taste of tournament preparation in 2016 when he volunteered to be part of the BIGGA Volunteer Support Team that helped at the British Masters in 2016.

A year later and he was awarded the prestigious Toro Young Student Greenkeeper of the Year. It was an incredible achievement for someone who had just a year’s full-time greenkeeping experience. Never one to rest on his laurels, Angus continued to impress and as well as achieving his level 3 qualification in greenkeeping, he also received successive promotions at the Roxburghe. However, he now feels the time is right to go it alone.

“I’ve branched out from greenkeeping to form Border Lawns and it is something I have been working on in my spare time for a while now,” said Angus. “The company specialises in lawn treatment and other general services such as mowing and hedge cutting. There is a lot of competition with other big franchise companies but after a lot of research, I do feel there is an opportunity for my company to stand out from the crowd.”

To do this, Angus believes in only using market leading equipment and it is for this reason that he had his heart set on the Pellenc range of battery-powered equipment.

A forerunner when it comes to lithium-ion technology, Pellenc has established itself as the number one choice in the ‘zero emission’ professional power tools market for the maintenance of urban and green-spaces.

Light, odourless, noise-free, with no starting problems and enough power to enable professional users to work for a full day on a single charge, it’s no wonder more and more professional users are turning to Pellenc. It is an attractive alternative to those who have, for several years, been relying on fuel-based machinery.

With an extensive product list available from Pellenc, Angus chose to invest in a whole new fleet consisting of chainsaws, blowers, hedge cutters, brushcutters pole saws, grass strimmers and mowers. All these products will be powered by 1200 and 1500 ultra-lithium batteries.

“I first saw the products being demonstrated by Agrovista Amenity when I was working at the golf course and I was taken aback,” he said. “I have used lots of petrol-powered machinery over the years and they have been great but there is an expense to keep them going, and you do get issues with them. As a company I would like to be environmentally sustainable and benefit from the long-term savings that can be achieved through battery-powered products.

As Angus says, not only will users see a huge amount of savings by eliminating the necessity of purchasing fuel but by using the Pellenc equipment, they will be contributing to protecting the environment by reducing the consumption of fossil fuels and noise pollution.

“The fact that they are so quiet and comfortable are huge benefits too,” continued Angus. “I can start work earlier in the morning because the equipment doesn’t disturb anyone, and I can work for longer periods because the machinery doesn’t scream my head off!

“The run time of the Pellenc equipment is so far ahead of all of the other electric products out there. They are waterproof with an IP54 rating too so I can work in any weather – which is vital. Another big benefit is that the batteries are recyclable.

Pellenc UK recently announced the launch of an industry leading four-year commercial warranty for all batteries and three-year warranty for all tools – something which further impressed Angus.

“The warranty is a great peace of mind,” he said. “Ultimately, the Pellenc equipment is powerful, reliable, environmentally friendly and keeps its worth for several years – it is a good investment in my opinion. Allan Wright from Agrovista Amenity, who supplied the equipment, has also been very helpful – that’s exactly what you need from a dealer.”

Pellenc products are exclusively distributed in the UK by Etesia UK.

Beautiful lawns the sustainable way: Some say that it must be impossible to have a lawn that is both good to look at and good for the environment.   This is simply a myth that needs busting once and for all!

The Lawn Association team know that lawn care should be taken seriously as its vital to our living environment and more importantly, to our planet.  The team believe in the ethical and organic promotion of grass as an integral part of our living landscape and will never support practices or products that damage or destroy our natural habitats and our environment. 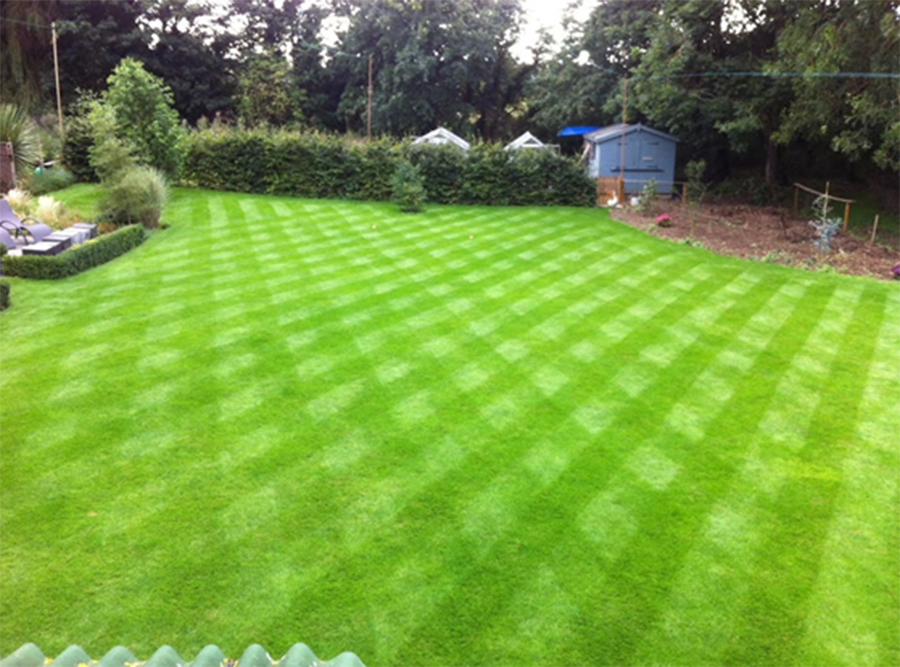 Today, due to excellent modern technology, more and more mowers are produced which are powered by lithium batteries. Lawn feed has come on in leaps and bounds too, a new lawn feed that will be launched soon through the Lawn Association is made from re-constituted food waste and into plant food and soil conditioner for your grass and soils. It’s the ultimate in green gardening – and your lawn will love it!

We must not forget the benefits to us from lavishing love on our lawns either, lawn care is beneficial for our mental health, with scientific research pinpointing several reasons why it reduces stress. The first key reason is simply being outdoors. Secondly, the exercise involved in mowing a lawn is not only great for our physical health but can also boost our mood. This also has an element of mindfulness, of being in the moment.  And finally, the act of nurturing our lawns and seeing them flourish, give us a feeling of positivity.

To say that we cannot have stunning lawns produced in a sustainable way is simply not true and risk whisking away one of the greatest pleasures we will have in the coming seasons.  This is a myth constantly pushed by some.  Our countryside is green and certainly, grass and Britain’s lawns are green. If you don’t think so then well be happy to talk.

For more information on how to look after your lawn in a modern, sustainable way throughout the year why not join the ‘Lawn Association’?

Our core mission is to make accurate lawn care information readily available via our website and through our Free Membership Scheme for gardening enthusiasts. Go to the @LawnAssociation Facebook page to join the Lawn Enthusiasts Group, and get free association membership via the website, www.lawnassociation.org.uk