Toro and Reesink Turfcare, an official UK supplier of Toro, have long advocated innovation through renovation in its irrigation strategy, but more often than not customers have a sprinkler upgrade rather than the integration of a central control system. 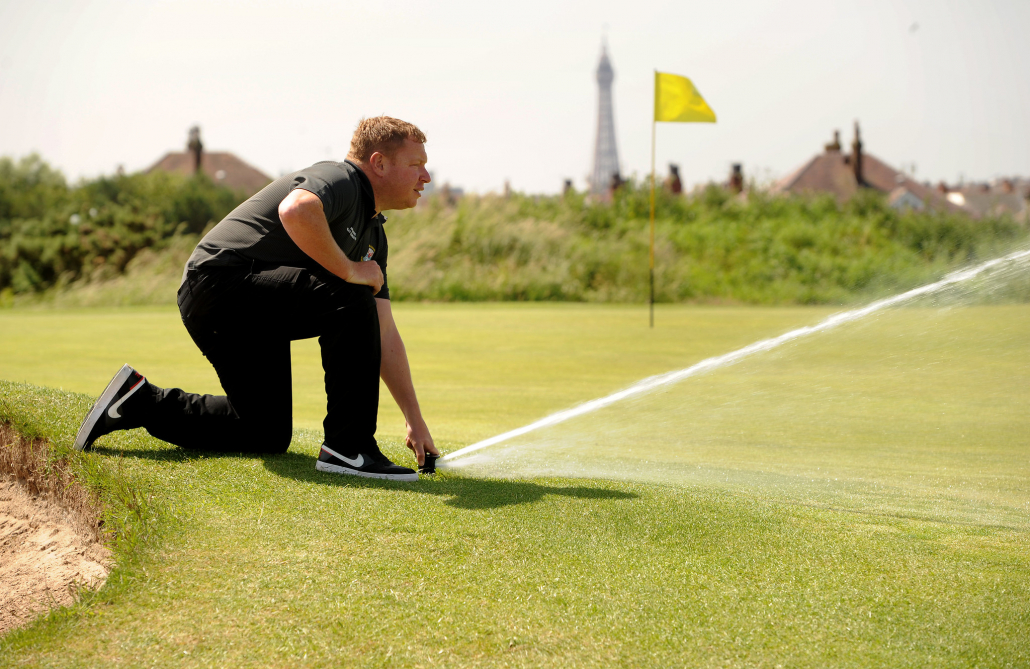 Blackpool North Shore provides a classic example of how, when it comes to renovation with Toro, it doesn’t matter which part of the system needs replacing success is sure to follow.

Course manager Andy Moore says: “There was no question about it, Blackpool North Shore needed a new central control system. Ours was 13 years old and left unsupported by a brand which had subsequently left the sector. The main issues we had to rectify were getting the control system talking to the sprinklers again and improving operation.

“In recent years, things were held together by hand-watering and returning to the course out of hours and late at night to apply water. Obviously, that wasn’t a sustainable situation, but the shortfallings of the system were really highlighted to everyone in the drought of last year. By then I’d been appointed course manager and this was the project with which I could make my mark.”

Andy had whittled his decision down to two control systems and says Toro Lynx triumphed thanks to its technological benefits and the thorough and comprehensive demonstration provided by Reesink. “Not only did Peter Newton come to demo the system to myself and the team and took his time explaining all the USPs, but he came back and went through everything again in a presentation to the board. That made all the difference, everyone bought into it and knew what we were investing in.”

Installation was completed by Rob Green by Green Irrigation in just a couple of days, to deliver Blackpool North Shore a system more than capable of working with any sprinkler or weather station, no matter its age or brand.

As long as the correct sprinkler data is entered into Lynx, no matter what the brand of sprinkler is being used – and all can be catered for – the result will be accurate watering, as Andy confirms: “The Lynx system has delivered a level of accuracy and consistency we haven’t had in many years. We can now irrigate in millimetres. It’s incredible really and can all be done via the mobile app, which myself and my deputy Dan are finding to be a real benefit and so easy to use.”

Stage one of the irrigation refit is the first step in an all-encompassing plan of course improvements, says Andy: “We’re bringing definition to the fairways of this Harry Colt-designed course. At the moment the fairways are rolling and each seems to roll into the next. By adding gorse plants and pathways we hope to improve the presentation of the course for our members and visitors. We’re also reducing the number of bunkers significantly and making those we keep have revetted faces, and we’ll be releveling the tees.”

And, of course, stage two of the irrigation refit will be taking place. The sprinklers will be replaced for either Toro Infinity or Flex, depending on which suits the club’s system and course best. The Flex Sprinkler has the same riser to Infinity, just a different body. Andy continues: “We’re trialling four Infinity sprinklers on the 18th green at the moment and they’re performing really well. I’ve heard good things about Toro Flex too so the jury’s out for the moment. What I can say is, it’ll definitely be Toro we go for!

“We’re a relatively small greenkeeping team and anything we can do to ease the pressure and load is going to be something we’ll consider. Most of the course improvements we have planned will go some way in helping make the day-to-day maintenance and care of the course easier to manage. The same applies to the irrigation. Technology – and Toro – have proven that one simple change, done in a couple of days, can make all the difference.”

Some have credited Toro’s Lynx control system with bringing industry buzzwords ‘interchangeable’ and ‘future-proof’ irrigation to life, and Blackpool North Shore is the latest living proof in how simple and quick it is to deliver that kind of improvement.

Toro Lynx System At Newquay GC: Cornwall’s Newquay Golf Club, a traditional links course with traditional links irrigation issues, has opted for the Toro Lynx control system and Flex Series sprinklers to keep the course in pristine condition, and within six months the results are the talk of the county.

Head greenkeeper Dan Kendle explains: “It was time for a new system, but we also wanted to make sure we have a system which could cope with the fact that we’re an exposed links course. We’re built on sand dunes beside the Atlantic Ocean and we get a lot of wind and salt spray. I knew we needed an irrigation system capable of dealing with that.” 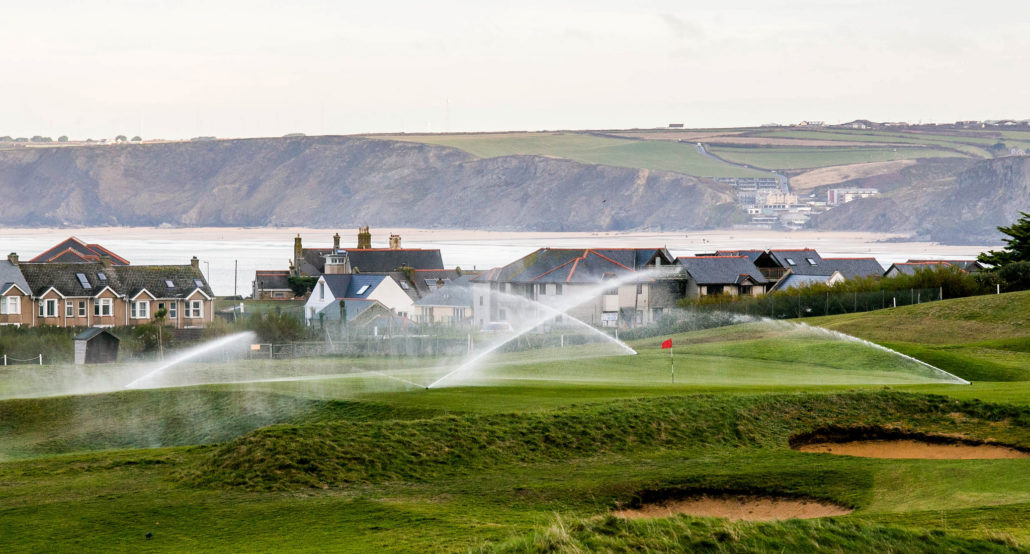 With the previous system failing the club, it’s easy to see why a change was needed, and Dan worked with irrigation specialists Irritech to assess the current system and design a new one. The process concluded with Full Circle Irrigation installing a Toro Lynx Central Control System with FLEX 35 and 55 Series sprinklers provided by Reesink Turfcare on the greens, surrounds and approaches last winter.

“Our old system wasn’t efficient in terms of the time it was taking and the water it was using,” comments Dan. “It was malfunctioning to the point where we couldn’t use it automatically overnight and had to water manually by hand in the day, which wasted valuable resources and time that could be otherwise spent maintaining the course. The difference since we switched to Toro is massive. We now have denser and greater grass coverage, especially across the greens. Members say they can’t believe how much better the course is now, and the buzzword is our greens are the talk of the county!”

The FLEX 35 and 55 series features a dual trajectory main nozzle with an easy adjustment to a 15 or 25 degree setting providing improved performance against harsh links conditions, which has been particularly beneficial at Newquay. Plus, the added benefit of part/full circle drive allows easy adjustment to accommodate specific watering needs which is ideal for a links course. The features of the sprinklers work alongside the Toro Lynx Control System perfectly, with the intuitive interface allowing for customisation to suit course conditions.

Newquay Golf Club has long been a Toro machinery customer, but Toro Irrigation was chosen on merit through extensive research and viewing different systems in action.  “We already had a full fleet of Toro machines, so from the start I was keen to go with Toro as it’s proved itself to be reliable and dependable. However, it was important we considered all the options before deciding and we were really thorough with the process. It’s a big investment and members needed assurance we’d done our research. We had a lot of discussions and went to see the Lynx system and another brand in action. After seeing how they operated, it was clear that the superior system was Toro’s.”

He concludes: “The whole experience with Toro and distributor Reesink has been first class from start to finish. The rep, Robert Jackson, was really helpful which made the process stress-free, and any issues were sorted really quickly. With such a difference to the course already, I’m confident the future of the course is in safe hands with Toro Irrigation.”

Irrigation With Toro Lynx: Implementing moisture level monitoring, updating controllers with the latest software and frequently applying evolving course setup conditions to your irrigation programmes, all contribute to responsible and sustainable management of your golf course. Ed Stant, course manager at Trentham Golf Club near Stoke-on-Trent, has recently spoken about how recent changes to his irrigation management are paying dividends.

“Two years ago we had a completely new irrigation system installed,” Ed says. “We opted for the intuitive Toro Lynx control system with 170 Infinity series greens, approaches and surrounds sprinklers. Having the right technology greatly aids professional irrigation management, but getting the most out of it is a skill in itself, and for me it all starts with monitoring soil moisture levels. I use a HH2 Moisture Meter probe and its readings depends on what irrigation I apply.” 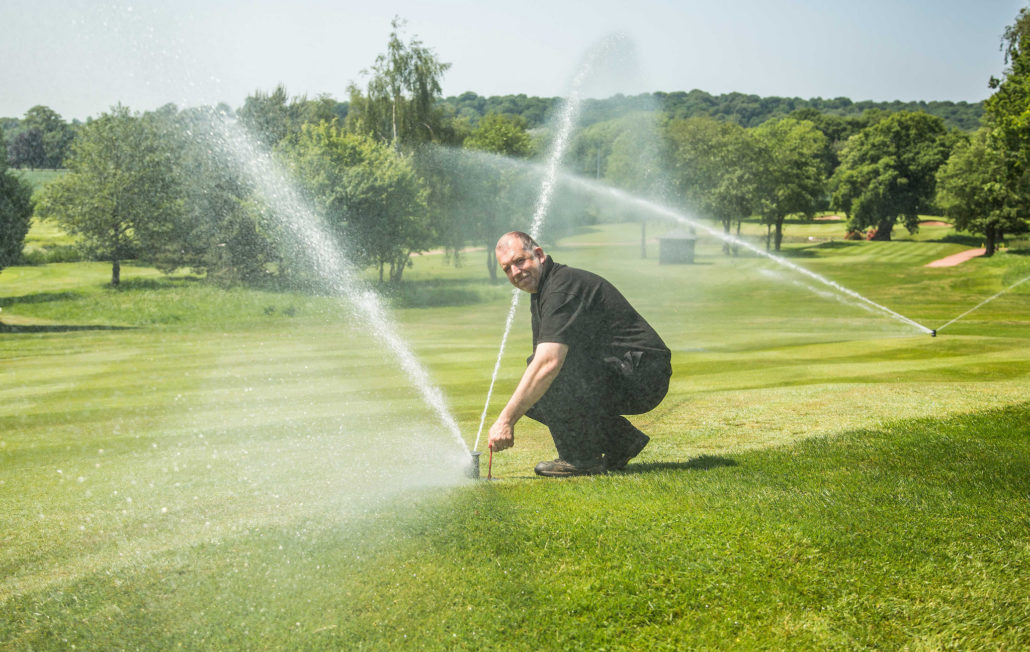 Knowing the exact conditions your turf’s health faces will lead to more informed and ecological decisions, as you will only use the water needed to sustain it. Couple this with an intuitive control system which can be accurately tailored to precise conditions and requirements, means you have even more control over water consumption and sward health. This is integral to good irrigation practice as every area of turf can be different.

“Having an intuitive control system is fantastic for precise irrigation and, of course, specific requirements around the course. We had a reasonably wet summer in 2017 but as we all know no course is uniform and for whatever reasons certain areas will need more moisture than others. Being able to apply additional water where it is needed over the last couple of years since we got the new system has resulted in us having great grass coverage across the entire course, even in the walked areas.

“Since we last spoke, we’ve also put a lot of time and effort into killing the coarse rye grass around the greens surrounds and that meant a lot of specific watering of the affected areas. Being able to water-in just the top-dressing or apply water where overseeding and spreading herbicide, has greatly aided the process, allowing us to also be far more water efficient than we could have previously been.”

Another factor contributing to improved efficiency and one of Ed’s highlights with the new system and sprinkler set-up are separate surrounds sprinklers: “Having separate surrounds sprinklers means we can irrigate in opposite directions and, therefore, avoid overwatering the greens when irrigating the surrounds. We couldn’t achieve this level of precision with our last system and I have to say it is one of the best things the new system and sprinkler set-up we opted for offers. It also allows us to dampen down the bunkers when they get dry, which is another big advantage.”

Adding to this efficient irrigation at Trentham Golf Club is the fact that the club is also sustainable. At the same time as the irrigation system installation a 42m borehole was put in and seeing as the club does not exceed its limit, it means free water for irrigation purposes.

This carefully managed control over water usage is great; it is more environmentally friendly, plants are healthier, surfaces are more aesthetically pleasing, playability is improved, and it’s saving money too. Applying just the right amount of water is a no-brainer. Every drop counts, and every drop saved benefits the club, the players, visitors and the environment, as confirmed by Trentham Golf Club!