Moortown ready to take off with Irriplan and Hunter Pilot – The storied Moortown Golf Club in Leeds in the north of England has completed the installation of a new irrigation system, replacing a failing 35 year old system. 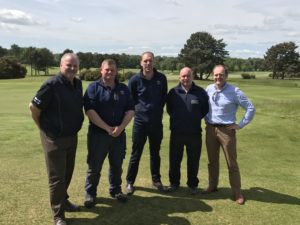 “Our old irrigation system was very old, and it was failing miserably,” explains Moortown secretary Peter Rishworth. “We were constantly getting leaks in the underground pipework due to age, and regularly seeing other faults too. On top of that, the system was very inefficient in its use and distribution of water, leading to a lot of hand watering to compensate. The old system was basically on or off and we were limited by a lack of automatic control over the individual heads.”

Moortown made contact with Irriplan and had just signed a contract for the design of a new irrigation system, when the old equipment suffered a particularly major breakdown at the start of the 2015 golf season. “Giles Wardle of Irriplan, and also Full Circle, jointly helped us out by patching up the existing system, but we knew replacement was the only way forward,” says Peter. “Full Circle, who we know as they are local, had recommended we work with Irriplan, and Steve Robinson, our course manager, saw the strength of the Hunter system, and in particular the Hunter Pilot control system.”

Installation of the new system began in October 2015, but the majority of the work was completed during the winter of 2016-17. “The project was completed in two and a half months, including new mainline pipes and coverage to tees, approaches, surrounds, greens and our practice facilities,” says Peter. “We switched on the new system during April 2017, and we actually just put the control system live on the internet this week, so Steve and his team can control it via their phones, when they are walking round the golf course. Obviously, it is very early days, but we can see that the level of monitoring and control we have is 100 times better than with the old system. We’re very pleased with the help we have had from Irriplan and Full Circle.”