MR SALTEX still gets butterflies: SALTEX operations manager Derek Walder, provides an insight into his illustrious career, his passion for SALTEX and his adventurous days with the Crazy Gang…

Derek Walder has rightfully earned the nickname Mr SALTEX. At 83 years old he has overseen the operations of the show for five decades and he is, unsurprisingly, the longest serving member of the SALTEX team. 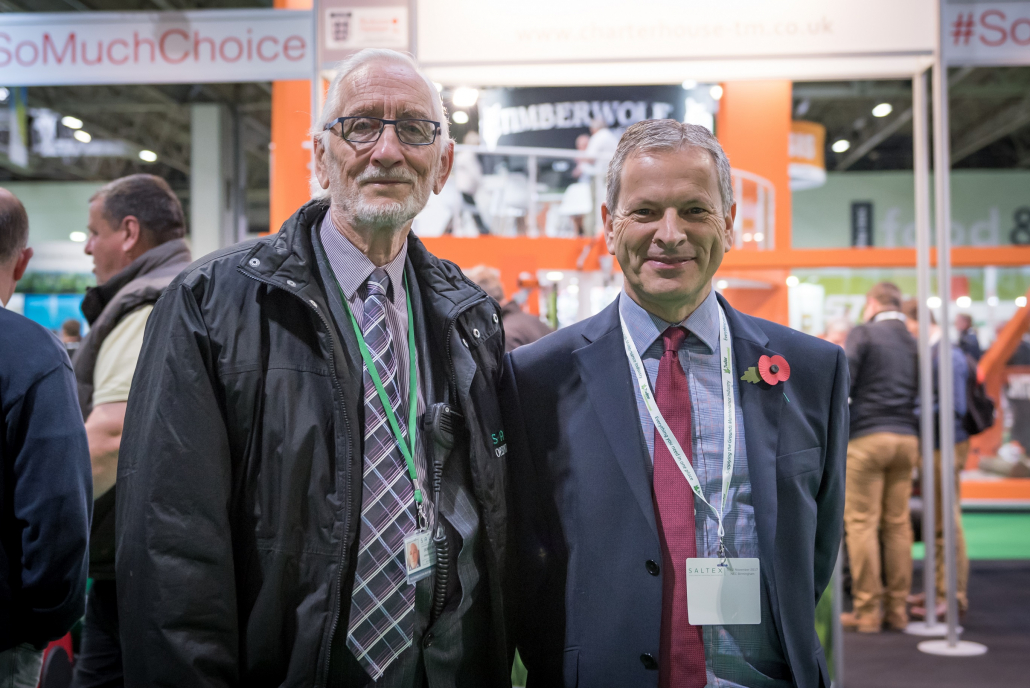 During this difficult and uncertain period, Derek revealed that he is staying positive and is continuing to do what he does best – helping to organise the groundscare industry’s largest event.

“SALTEX 2020 will mean more than any other previous event that we’ve ever put on,” he said. “I am hugely confident that it will be the best one yet. In my mind it’s all about getting that show on the road because the trade will need it, the people in the profession will need it – everybody will need it. After this awful period, SALTEX 2020 will be a much-needed boost for everyone.”

SALTEX 2020 will be the show’s 75th anniversary but it all started for Derek back in 1969 when he attended the show, which was held at Motspur Park in London, as a visitor. A year later Derek moved just 20 minutes away from Motspur Park and it was at this point that the aspiring young groundsman began working as a volunteer on the show.

“I felt at home straight away,” he said. “I found myself doing lots of things such as putting up marquees, helping both exhibitors and visitors and I was even parking cars. Back in the 60’s and early 70’s the show never had more than 30 trade stands but I can still remember the machinery that was on display, I remember the educational talks that took place and I remember the demonstrations on how to prepare cricket wickets.

“The show suddenly grew and grew over the years and it wasn’t long before approximately 8,000 visitors were attending. The formula then is still what it is now – to bring the industry together, to talk and to discuss, to educate and learn, and to see all of the latest products.”

After volunteering on the show for eight years he eventually took over the position of operations manager when the show moved from Motspur Park to Windsor Racecourse in 1979. 36 years later and SALTEX was relocated to the NEC, Birmingham, and it is safe to say that Derek was pleased with the new indoor venue.

“I remember the outdoor shows when we used to have bad weather – it was a nightmare,” he said. “There used to be lorries getting stuck and it was pouring down with rain. There was mud everywhere and exhibitors used to complain about puddles outside their stands. We used to have a ground crew permanently on stand-by to go and help the exhibitors. We also had to lay metal tracking across the racecourse – which was a huge job. If an exhibitor a mile across the racecourse wanted an electric socket, it had to be dug into the ground. However, since moving to the NEC, it is a totally different ball game.”

The build-up, which used to take eight days outdoors, now takes just two days at the NEC, and while Derek admits that the move indoors has made his life slightly easier, it is still not without its challenges.

“The major change was that we only had two days to build the show in what is a tighter area. It’s putting all the little things together which is difficult – like the furniture supply and the electrics for example. Fortunately, I’ve got a great team around me, with lots of experience, and everything has run incredibly smoothly to date. It’s important to remember that this team is largely made up of volunteers – GMA members who give up their own time because they are passionate about SALTEX and the industry.”

Derek and his team are religiously onsite at 1 am in the morning on build-up day and are also the last to leave in the evening. Their commitment to SALTEX is unquestionable. They know that this is a show which hugely benefits the industry. In fact, not many people know that any profits created by the running of the exhibition is reinvested back into the varied work GMA does to support the groundscare industry.

“As soon as the doors close to the exhibition we start again immediately,” he continued. “It really is a year-long project. We have 15 different contractors and suppliers to source – everything from carpet on the floor to electricity and accommodation. We draw up specifications, tenders go out for quotes, we agree on a budget and then identify the best partners to work with. On top of that there are things like signage, the design of the show entrance, health and safety forms – let’s just say that there is more than enough to keep me busy!”

Fortunately, Derek is accustomed to keeping active. As well as helping to organise SALTEX for an incredible 51 years, he still had his own career to focus on. 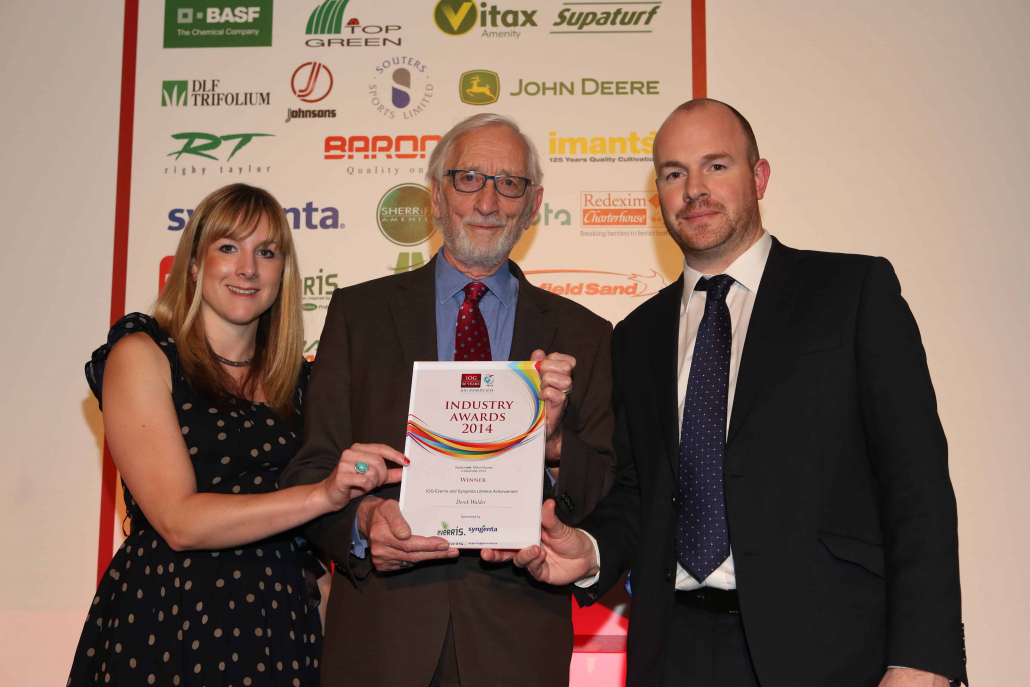 In the early 60’s he started his journey in horticulture by working as an under gardener at a large private estate. He quickly progressed, moving up to become head gardener, and it was then that he discovered that he really enjoyed looking after the lawns. From there he moved into golf, becoming a greenkeeper, before ending up at the playing fields at Wimbledon Common, which was the home of Wimbledon FC – aka the Crazy Gang.

The Crazy Gang was a nickname used by the English media to describe Wimbledon FC during the 1980s and 90s, due to the frequent cheeky and boisterously macho behaviour of the players. Derek spent 30 years there and was often witness to the outrageous practical jokes they would play on each other and on the club’s manager Dave Bassett. Those who know Derek best would have no doubt heard many of the side-splitting tales, including the famous night he found himself safeguarding the FA Cup trophy following Wimbledon’s astonishing victory over Liverpool FC in 1988.

“After the celebrations the kit man came back to the training ground and as well as all the kit – he had the FA Cup trophy with him. Nobody quite knows how the kit man had it, but the consensus was that most of the players and staff were slightly inebriated after the celebrations and they left the trophy behind. Anyway, the kit man was panicking about being in possession of one of the world’s most famous trophy’s and he handed it to me. I took it home with me to keep it overnight until it would be needed for the parade the next day. Admittedly I didn’t sleep well that night!

“I remember my son waking up in the morning and seeing the FA Cup just sitting there on top of the television. Well, shortly after that I had about 40 kids in my living room! It certainly was an experience and my family still trade on that story to this day.

“That bizarre experience summed up my time at Wimbledon – it was an adventure from start to finish. You never knew what was going to happen and to be honest I miss the days when Vinnie Jones used to come into my office in the morning, nick my newspaper, make himself a cup of tea and use my loo.”

Derek took early retirement in 2000 when the club disbanded but he was adamant he wanted to continue working on SALTEX. Throughout his long and illustrious career, he has witnessed phenomenal developments in groundscare – technology that a young Derek Walder could only have dreamed of when he first entered the industry.

“The machinery, the chemicals and the technical knowledge has changed beyond what someone my age could ever imagine. The profession has changed, and people have got to be more like technicians than ever before. They need to be more aware of biology and physics to keep these top stadiums going.

“I think the industry is in a strong position currently – which pleases me immensely. It is also great to see younger people coming into the industry although I would like to see even more. When you look around you will find that many people have been involved in the industry throughout their whole career and there is a good reason for that. Trust me – you will never look back.

“My only disappointment is the deterioration of public parks and local authority sports pitches. I think it’s quite simply because the money just isn’t there anymore. Unfortunately, people are more interested in bin collection and potholes.”

Derek is more than content when he reflects upon his successful career but make no qualms about it, he’s not planning on hanging his boots up just yet.

“I’ve got so much out of working in this industry,” he said. “I’ve gained many lifelong friends – so many great, genuine people that you don’t tend to meet outside of this industry.

“I’m looking forward to the future and my priority is to focus on the continuing success of SALTEX. It’s played a huge part in my life for so long.

“At nine o’clock when the show opens, and everyone comes streaming in I still get butterflies. That’s the buzz for me.”

SALTEX 2020 will take place at the NEC, Birmingham on 4 and 5 November.