‘Unfairly Dismissed’ KCOM Groundsmen Plea For Support: Two KCOM groundsmen who are planning to take their ex-employers to court have called on people to help in their “fight for justice” as they aim to get their jobs back. 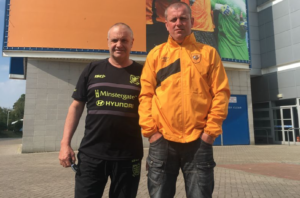 Darrell Cook and Mark Harrison were sacked by the Stadium Management Company (SMC) in June for gross misconduct amid claims the pitch had been deteriorating.

However, both of them insist they did nothing to warrant their dismissal and were never given any prior warnings by SMC.

Their campaign has so far raised more than £6,000 and has been backed by Labour leader Jeremy Corbyn, who tweeted messages of support to the pair.

However, with their court date looming, the pair have issued a statement urging them to keep on donating so they can reach the sum of £20,000 and hire “the best barrister in the business.”

The pair wrote: “We are now two months away from the hearing and the reality of our situation is beginning to hit home.

“We set a crowdfunding target of £20,000 to enable us to fight for justice and stands up to the people who put us in this awful position and to create a level playing field when we meet them in court – we have so far raised £6,170 of that target.

“Without crowdfunding we have no chance and would simply have to roll over and accept what they’ve done to us.

“We have now got to the point where have seen their defence and all the documents and we are now even more encouraged about our case, as are our legal team.

“All we want is for the Employment Tribunal to restore out reputations by telling the world that we were unfairly dismissed and that we did not deserve what is happening to us.”

Mr Harrison started working for Hull City as an assistant groundsman in 1988 when he was just 16 years old, whereas Mr Cook started his work as a groundsman in 1991 with Hull FC when they were at The Boulevard.

The pair were sacked in April earlier this year by SMC, leaving them devastated.

Mr Cook, who lives in Sproatley, previously said: “This is a job I have done for 27 years and there was no indication anything like this was coming.

Determined to drum up more support, the duo ended their lengthy statement, which they published on Twitter at 11:02pm on Thursday, with a plea for as much support as possible in the days and weeks to come.

They wrote: “Please, please, please help us to spread the word and encourage all who can donate to our cause to do so.

“We’ve been unfairly dismissed with immediate effect from our positions as senior groundsmen with 55 years’ combined service with an exemplary records during which we won awards and at time of financial trouble for both clubs we have worked without pay.

“We gave blood, sweat and tears to forge a reputation as one of the most experienced and longest serving stadium ground staff teams in the country.

“We need your help and support to prove that justice can prevail if you are prepared to stand up for what is right.”

SMC have confirmed that their defence was filed on July 28 and, because the claimants have stated via social media that they would provide “regular updates” throughout the process, SMC have therefore given the claimants express permission to publish the document.

A spokesperson for SMC said: “We remain of the view that their claims to be reinstated into their old roles will not success and will continue to robustly defend this matter in the correct way.”