The Beast On The East: Scott MacCallum takes his life in his hands and heads to Carnoustie ahead of this year’s Open Championship.

Carnoustie has always been one of the iconic Open venues… IT IS revered within the game. For one thing it has a role of honour which contains the name Ben Hogan – the only Open venue to do so. Hogan played in one Open, at Carnoustie in 1953, and won. His austere manner  matched that of the town to a t and the locals took the Wee Ice Man to their hearts.

Driving to Carnoustie to meet Head Greenkeeper, Craig Boath, I noticed something that was a little strange. The east coast of Scotland is not known for its balmy temperatures but I was coming out in a bit of a cold sweat. 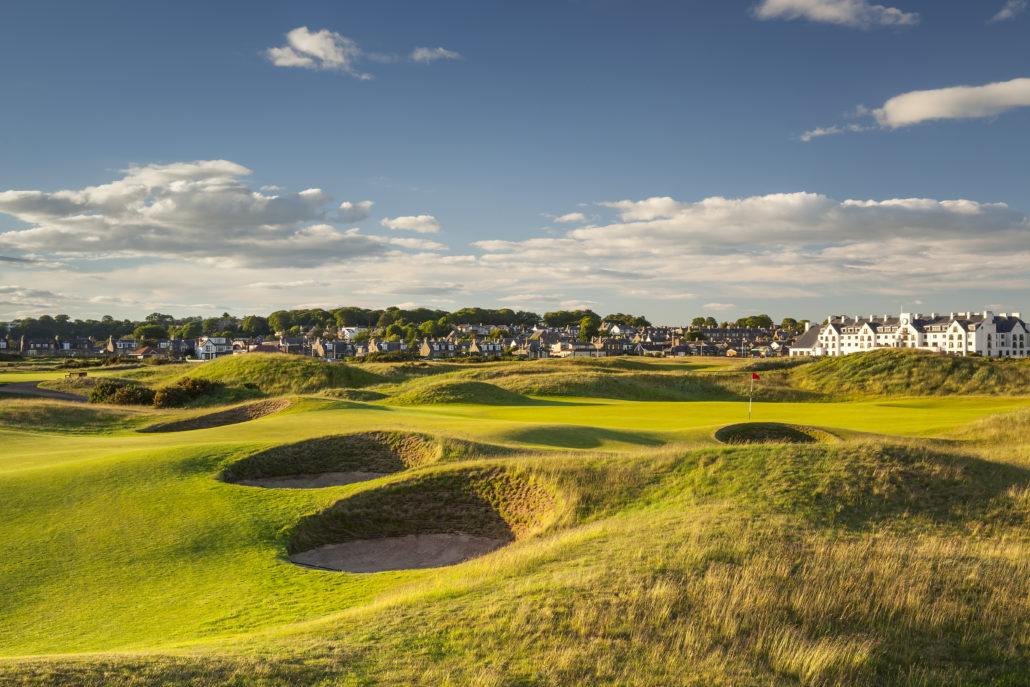 Now it may be that a few world famous golfers will experience exactly the same when they arrive for this July’s Open Championship. Last year’s Masters Champion, Sergio Garcia, could certainly be forgiven for doing so. As the rising superstar in the game in 1999 he managed to negotiate the 18 holes of the first round in 89 – out in 44 back in 45. Admittedly that was five shots better than I scored the last time I played the course, but I know that would have been of little consolation to Sergio.

He did redeem himself at the last Carnoustie Open in 2007, however, but, having led for three rounds dropped a shot on the 72nd hole and lost the play-off to Padraig Harrington. More memories he’d like to drop.

No, the reason for my cold sweat was nothing to do with my prowess or lack of it on the course but two incidents, one at each of the aforementioned Opens, which might have seriously scarred a lesser man.

In 1999 I was in the privileged position of being inside the ropes on the 18th hole as Jean Van de Velde was heading for a well deserved, and fairly, uneventful victory. His meltdown has been well documented and the footage of Jean, with rolled up trousers standing in the burn short of the green, is one of the most memorable in sport.

Jean’s chances had gone up in smoke when his approach to the green ricocheted off a bracket on a stand which was sitting at 45 degrees to the rest of the structure and bounced all the way back over the burn and into deep rough. From there he had hacked it into the burn.

Well, that second shot missed my head by a matter of inches. Had it struck me I would have had a very sore head, my picture in the papers and Jean would have been Open Champion and not local hero, Paul Lawrie. Indeed, had the ball not hit that little bracket flush and bounced 40 yards backwards Jean would have been over the water, able to get a free drop and had sufficient shots in hand to lift the Claret Jug.

My second piece of trauma occurred a couple of days before the 2007 Open. I was driving a minibus containing a group of greenkeepers, who were part of the Open Greenkeeping Support Team, to the golf course to familiarise themselves with what they would be doing that week.

I was delighted to see many of the spectators waving to us and thought it was a wonderfully friendly start to the Championship.

The low bridge which gave conventionally sized vehicles access to the course wasn’t quite tall enough to take my minibus.  On the upside for the rest of the week it as always easy to spot our unintentionally modified mini bus amid the dozens of others, but on the downside it led to a very interesting conversation with the hire company when we got back home.

So, with things happening in threes, I am a tad concerned about what might happen at the 147th Open.

But I digress. Carnoustie has always been one of the iconic Open venues. The town itself isn’t much to look at but the name, Carnoustie, is revered within the game. For one thing it has a role of honour which contains the name Ben Hogan – the only Open venue to do so. Hogan played in one Open, at Carnoustie in 1953, and won. His austere manner, matched that of the town to a T and the locals took the Wee Ice Man to their hearts. A lasting tribute to him is the 6th hole, known as Hogan’s Alley because he threaded his tee shot between the bunkers and out-of-bounds on each of the four rounds.

Tom Watson won the first of his five Opens at Carnoustie – beating Australian Jack Newton in a play-off – and the honours’ board also includes Henry Cotton and Gary Player. 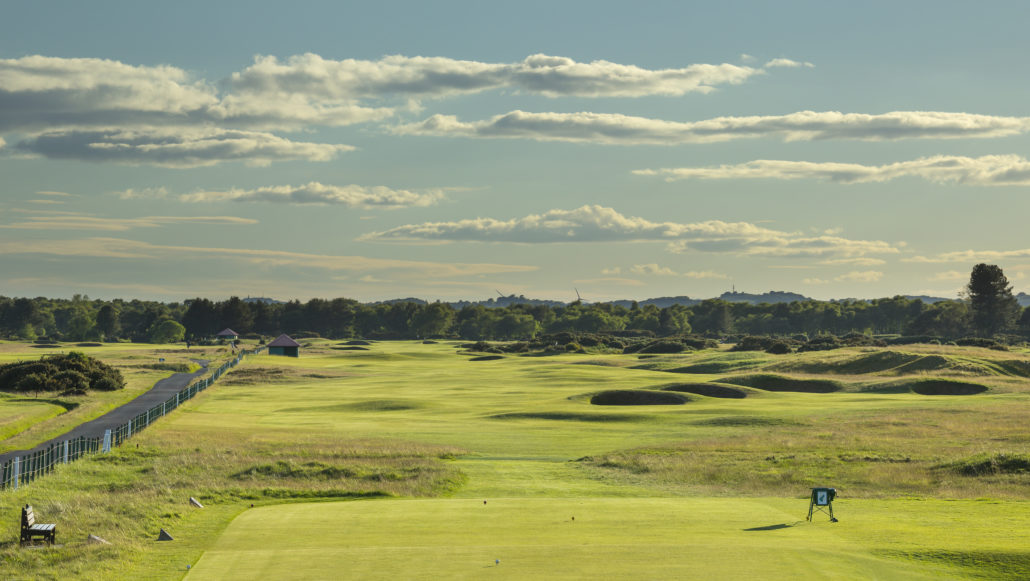 But Craig Boath, along with the Links Superintendent Sandy Reid, and the rest of the 33 strong Carnoustie Links greenkeeping staff – they maintain three superb golf courses – are looking forward not back. And judging by the condition of the golf course they can look forward with confidence.

“We want to have the best golf course possible every day of the week and want the visitors who come to Carnoustie to experience the same conditions as the professional golfer gets,” explained Craig, who was on the team in ’99 Deputy Head Greenkeeper on the Championship course in ’07 and became Head Greenkeeper in 2012, when legendary greenkeeping man John Philp retired and Sandy moved up from Head Greenkeeper to Links Superintendent.

“We started thinking about this Open as soon as we’d finished in 2007, so in one way we’re always preparing for an Open. But as we get closer we’ve been working much more with the R&A – Martin Slumbers, Chief Executive; Grant Moir, Director of Rules, and Clive Brown, Chairman of the Championship Committee – and have a very good relationship with them.”

Fairway widths remain the same as from the last Open, while greens should be around the 10 mark on the stimp. The team has also been working on their rough for the past four or five years.

“We’ve been trying to eradicate the poorer grasses and encourage the finer grasses in the rough and feel that rather than having defined semi to main we can have a semi rough and feather it into the main rough,” explained Craig, who comes from a long tradition of Carnoustie men who strive for finer grasses and firmer surfaces.

Carnoustie does possess a fearsome reputation and I asked Craig that, if the sun shone and the wind didn’t make an appearance, whether he’d be disappointed if the winning score was 15 or 16 under.

“Obviously if the wind blows and it would be nice to get a range of winds from different directions  – it might happen it might not – it will make it interesting, but Carnoustie is not so dependant on the wind for protection as other links courses.”

In what is probably a first in modern Open history the course facing the 156 players this year will be shorter than the 2007 version. Generally speaking every last inch is squeezed out of the Open rota courses to combat the modern day superfit athletes who can power a golf ball well over 300 yards but, while it’s only 20 yards, Carnoustie has given up some distance.

“The 1st is shorter to enable a stand to go in behind the tee and the 3rd is a little shorter too, with more options available for the players. Carnoustie has always lived up to the test of time, so there is no need to lengthen it. Going back to when James Braid designed it in the 1920s it was 7200 yards.”

Hence its reputation for being a monster and one of the toughest golf courses in the world.

What has been noticeable in recent years has been the sheer scale of the Open circus when it comes to town with more and more television companies covering the Championship and all the ancillary paraphernalia which accompanies it. Indeed Carnoustie is benefiting from the installation of permanent fibre optic cabling for the last Open.

“I can’t remember too much about 1999 but I know it was much bigger in 2007, with the need for a much bigger contractors area. But now it has doubled from 2007. I really have noticed the difference in scale,” said Craig, whose passion for the links is shared with Sandy – who sadly was tied up in a meeting during my visit – ensures that no stone is left unturned in creating a magnificently maintained golf course.

With a number of tournaments under his belt Craig also knows what it takes to prepare a course on a daily basis and cutting will start around 4.30am each morning.

“With the R&A and the STRI out doing testing on the greens we may have to do a bit of leap frogging at times but I’m not too worried about that.”

And not worrying is a quality which will carry Craig through the next few months. When we spoke, growth was around three weeks behind but a bit of heat in the air and it will kick on. And let’s face it  you can’t worry about something you have no control over!

Asked about whether the week itself will offer trepidation or excitement Craig’s laid back spirit comes to the fore again.

“Once we get to the week before, and I know everything has been done, I know we’ll be ok. We’re just waiting for that wee bit of growth.”

So while I will be approaching this year’s Open waiting to see what fate is in store for me Craig, Sandy and the guys will have everything under control.