The Lakes: Laurence Gale travelled to Australia and persuaded an ex-pat greenkeeper to write about his experiences greenkeeping on the other side of the world.

A recent family trip to Sydney to see my daughter, afforded me the opportunity to visit some local sporting venues, I was particularly interested in visiting the Lakes GC, knowing that Simon Blagg, a British Greenkeeper, was working there.

After a few phone calls I managed to contact Simon who is now the Assistant Superintendent at the Lakes Golf club. We arranged a date for me to visit the course and duly met up some days later. Upon arrival at the club I was introduced to the Courses Superintendent and head mechanic, followed by a whistle stop tour of the course and facilities.

I was fascinated to find out more about the course and how Simon had adapted his skills to work in a quite challenging climate. I would like to thank him for his time and taking the time to put pen to paper to produce this fascinating in-depth article. 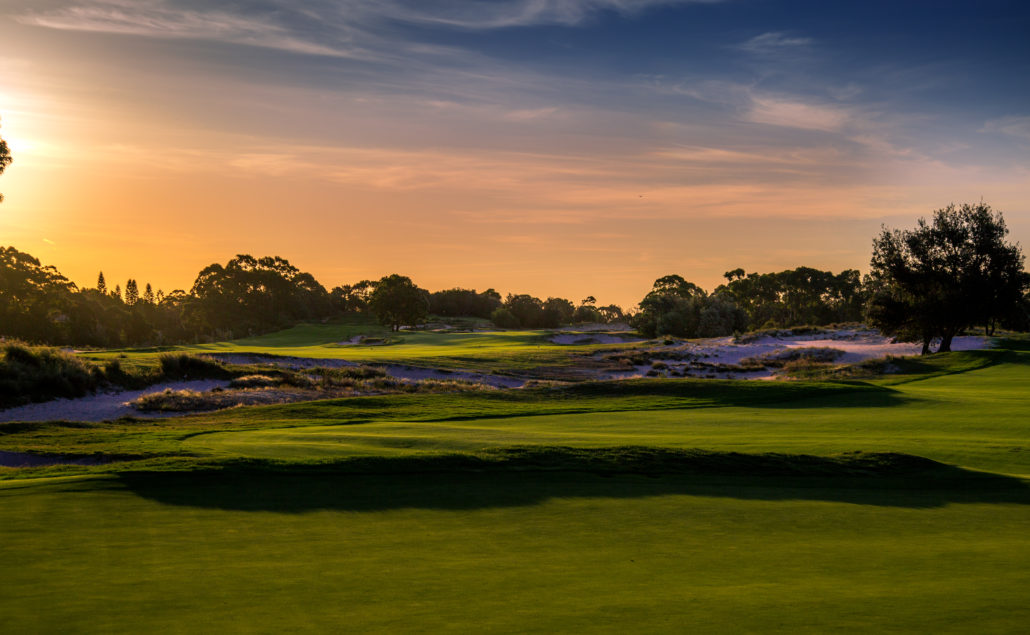 Growing Turf Down Under – Simon Blagg

From growing up in my home town of Madeley, Cheshire in the UK, to working at The Lakes Golf club in Sydney, Australia; the past fourteen years of my turf career have been an amazing experience to date.

I completed my turf qualifications at Reaseheath College and while there, I worked at Keele golf course which has now unfortunately closed down, before spending two great summers under John Turner at Leek Golf Club, who taught me a significant amount about sustainability in the turf industry. At the same time I was working as groundsman of Maer Cricket Club.

In 2008 I set my sights on the Ohio State Turfgrass internship program, where I worked at Whistling Straits, in Wisconsin, and then onto the Doral Golf Resort, in Florida.

Working on the Blue Monster course, I got to experience my first golf tournament when Doral hosted the annual World Golf Championship event.

After I returned to the UK I worked two seasons at Loch Lomond Golf Club. The club hosted the Scottish Open a week before The Open. In between the first and second season at Loch Lomond I secured a summer casual position for six months at New South Wales Golf club in Sydney. This was when I got my first taste of life in Australia. I met my now wife, within the first week of being in Australia.

New South Wales hosted the 2009 Australian Open. I had gained valuable experience from my from my time at New South that summer. I returned to Loch Lomond in 2010 to assist with the preparation for what would be the club’s final Scottish Open. I can’t thank Dave Cole, at Loch Lomond, enough for what he taught me during that time, including his attention to detail and how to keep incredibly high standards.

After the home summer of 2010, I was lucky enough to secure a sponsorship at Roseville Golf Club in Sydney. I worked my way up the rank and eventually became Mark O’Sullivan’s assistant in 2013. I remained at the club for another two years and after a total of five years, and an Australian citizenship achieved, I decided to apply for the Assistant Superintendent position at the Lakes Golf Club in Sydney. After a successful interview, I started at the Lakes in early January 2016.

The Lakes is on the southern side of the city, roughly around 15 minutes from Sydney’s central business district. The area is a popular golfing destination, with the Lakes backing on to both Eastlakes and Bonnie Doon Golf Club and The Australian within a 5km radius. The club is within the Botany Wetlands, a series of interconnected ponds forming an open space wetland corridor stretching to 226 hectares.

Over the years the course design has been altered, in particular in 1950s when the state government put plans together to build a six lane express-way right through the middle of the course.

The club then employed American Robert Von Hagge who agreed to redesign the course. Von Hagge’s redesign was constructed and completed by June 1970. During the 70s and 80s, the Lakes was renowned for its fast true greens. However, by 1994 the greens were beginning to show their age and the winter grass population was too much. The club then decided to resurface all of the greens with SR1020 Bent grass.

By 2006 the greens were again over populated with Poa Annua and did not meet specifications. The board approached Mike Clayton to conduct a course master plan.

The club decided to rebuild both the 1st and 18th greens first. After the members’ approval of the two new greens, Clayton was commissioned to rebuild the remaining 16 greens and two lady’s greens.

The redesign included rebuilding the whole golf course as well as upgrading the Irrigation system. The greens were seeded with A4 bent grass. Tees Santa Ana couch and the fairways that were altered were returfed with common Kikuyu. Roughs and dunes were over seeded with Fescue. The course was re-opened in July 2009. The current course measures 6286 metres.

In 2010 the club hosted The Australian Open, which was the first tournament since the 2002 ANZ Championship. The club was asked again to host the tournament for both the 2011 and 2012 Australian Opens. The 2011 tournament was a successful, hosting pros of the likes of Tiger Woods. It was seen as good preparation for the 2011 Presidents Cup. In November 2018 the club will host its seventh Australian Open.

Anthony Mills has been Superintendent since 2012 and Aaron Taylor and I have been Anthony’s assistants since January 2016. We currently operate with a full team of 19 that includes two casuals and mechanic. An additional four casuals will be added to the team to assist with preparation for the Australian Open.

I’m a strong believer in getting overseas talent to come over and work for six months. We try and take the casuals on from September through to the end of February. For those coming from the UK, this often works well with the end of the UK summer and then heading into our summer period. On a working holiday visa, it allows you to work with two employers for two six month blocks. It gives young greenkeepers a fantastic opportunity to come and work in Australia and learn about managing warm season grasses in different climates. 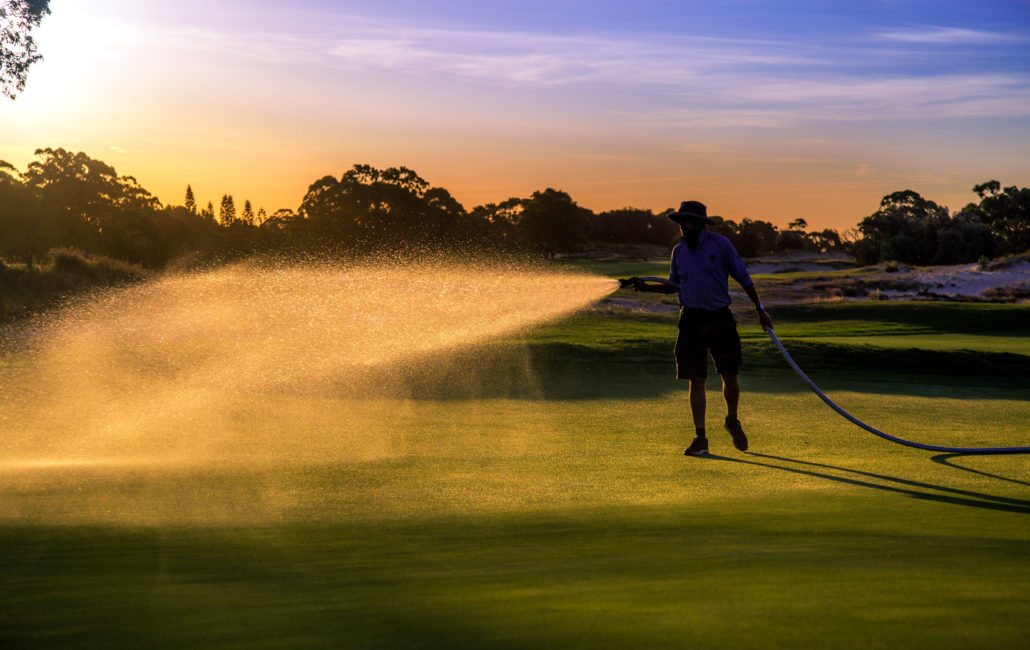 In November this year the club will host its seventh Australian Open. Over the last 18 months we have been very busy with construction projects. These have included rebuilding tees and resurfacing cart paths and extending sandy waste areas. In April 2017, we commenced our biggest project of all; the upgrade of the practice precinct area. The old practice facilities were beginning to look a little fatigued. The greens had a large percentage of Poa Annua and did not compliment the greens out on the course with very little undulations. Safety was also a big factor in the redesign. We were seeing a small percentage of golf balls leave the driving range and land on the 10th and 11th holes. The upgrade of the practice facility involved the following:

– Rebuilding and lowering the height of the range tee by 500mm.

– Installing a Tee line driving range mat for use in winter.

– Installing target greens on the range fairway to replicate shots played out on course.

– Installing further mounding on both sides of the range to protect golfers on the 10th and 11th holes.

– Installing mounding around the teaching facility.

– Installing a new concrete pathway to both the 1st and 10th tee.

The new putting green was seeded back in May 2017 and was opened in late September. All of the major earth works and turfing was completed by November 2017. The new turf driving tee was recently re opened and we are hoping to have the chipping green re opened by the end of March.

With all major projects complete we are now concentrating on fine tuning the golf course heading into the winter months and November will be here in no time at all. Planning and preparation is essential when preparing for a tournament of this size.

Finally, I wanted to say how great it was to catch up with Laurence Gale back in December and I’d like to thank Turf Matters magazine for allowing me to contribute this article.

Outstanding opportunities for greenkeepers – down under

Simon is always on the lookout for keen, enthusiastic greenkeepers from the UK who are interested in travelling to Australia to work the summer season. For further information about working in Australia in 2019, please email Simon at Asstsuper@thelakesgolfclub.com.au

A data-driven approach
Scroll to top