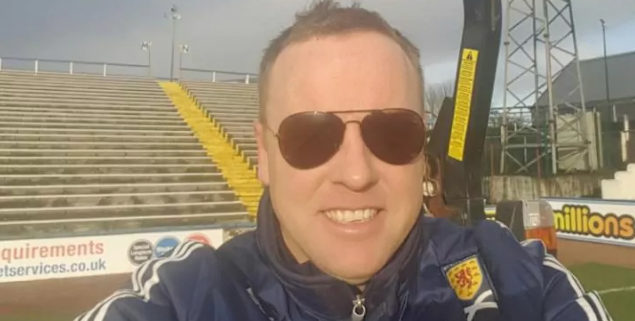 Mark Farrell is an odd fellow. His lean physique, his weather-beaten face, his calloused hands: this is a man who works outdoors, come shine, or, this being the west of Scotland, thumping rain.

But it’s his particular passion that marks him out as different from we mortals. This singular, migrant Mancunian is fixated by a special rectangular plot of dear, green land, a place of worship for hundreds if not quite thousands.

Pity his wife, Tracey, as he paces the living room in Ardgowan Street, Greenock, of a Friday evening, eyes fixed on glowering skies, muttering. His girls, Scarlet, six, and Olivia, four, know well enough to leave Daddy well alone at stressful times like this.

Mark is groundsman at Cappielow Park, home to Scottish Championship side Greenock Morton, and nothing – outside family – matters more to him than his domain, 100 metres long, and 68 metres wide. And groundstaff matter.

This just one week after Southend had tweeted praise for making sure the pitch was perfect for Rochdale’s visit – and after Mr Hare’s unblemished 27 years of service. He is now pondering legal action and fans are petitioning for his reinstatement.

No such problems for our Morton man, though. Your correspondent may be biased, but this seems to be the finest playing surface anywhere, and light years ahead of the boggy mire of the old days when free-scoring Andy Ritchie, Bobby Thomson and John McNeil fired us to the top of the Premier League for a glorious weekend or three way back in 1979.

To ask Mark, 40, why is to unleash an excited tirade of horticultural gobbledygook: of verti-cutting; rye-grass surfacing; top-dressing; time-tabled line-painting and mowing (with the 12-year-old tractor bought for a snip from Queen of the South when they went plastic) to exactly 25mm the day before a match. Little wonder, perhaps, that Tracey’s eyes can glass over sometimes.

“I can’t stop thinking about it. I can be at the lights in traffic, or watching the kids’ nativity play, or shopping in the supermarket, and I’m worrying away about the pitch and its condition. You’ve got to be on top of what needs to be done all the time. We’ve always played football on the deck, so it’s got to be right.”

The art of the groundsman had become much more of a science since the days of treacle-like conditions at the likes of the Baseball Ground in the mid-seventies. At the top end of the game, it’s big business now.

Of the 44 pitches in the top two flights in England, 43 of them are boosted by plastic fibres. They prevent pitches cutting up. And all of them have undersoil heating and pop-up sprinklers.

None of this, though, at Cappielow. Elbow grease and expertise garnered through jobs as golf-course green-keeper are key to a playing surface which now hosts 55 matches a year. As well as providing Jim Duffy’s side with the best surface in the league, it earns the club precious income: Scotland under-20s play there, and the Celtic youngsters do too. Barcelona’s kids have graced the turf here too.

Time, then, to salute Mark Farrell, just one of tens of thousands of unsung heroes up and down the land. They make Saturday afternoons special for us all.

Souters Sports put on a royal performance
Scroll to top