Sheer Poetry: Scott MacCallum catches up with Andy Richards to learn about his new role at the prestigious Haileybury School.

Many Wimbledon champions have taken inspiration from the poem “If”, which is written on the wall of the Players’ Entrance at the All England Club. You know the one – “If you can meet with Triumph and Disaster and treat those two imposters just the same”. 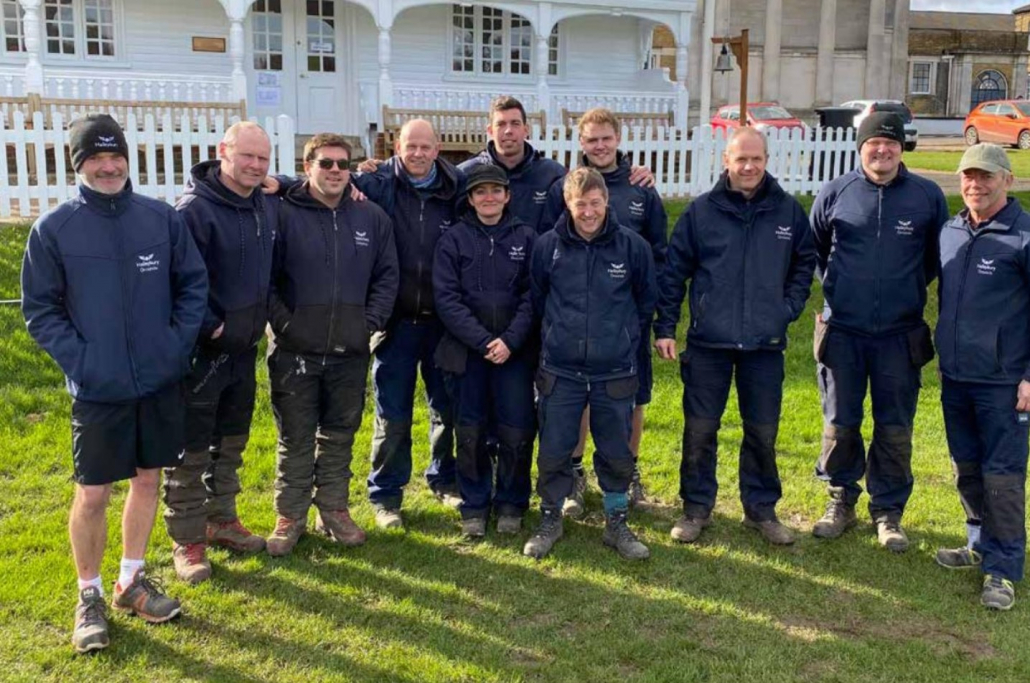 I have no way of knowing if, back in the second half of the 19th century, its author Rudyard Kipling had an interest in sport, or a particular aptitude for cricket or rugby, but one thing is for sure he didn’t benefit from any such stirring words if he were to have marched from the pavilion of Haileybury School to open the batting, or lock the Haileybury first team scrum.

It may have been, however, that it was dealing with the highs and lows of his sporting time at Haileybury that inspired Rudyard a few years later to pen what is one of the best known and finest poems in the English language.

A school can be judged by its alumni and in that regard Haileybury, near Hertford, has an honours board to match most. In addition to Rudyard Kipling we have dramatist Alan Ayckbourn;
film director, Christopher Nolan; actor Stephen Mangan, and comedian Dom Joly, to name just a notable few.

The list of Haileybury’s Old Boys is interesting and eclectic and marks the school out as somewhere special, as do the superb grounds in which the school rests.

It was seeing those wonderful grounds which persuaded Andy Richards that he should move from Shrewsbury School, which he had transformed into a school with sports surfaces the envy of many professional clubs, to create sports pitches to match the quality of the rest of the school.

“Shrewsbury was a great place to work and I really enjoyed it but when the Haileybury job became available I was intrigued,” explained Andy, talking to Turf Matters eight weeks into his new role as Grounds Manager at Haileybury. 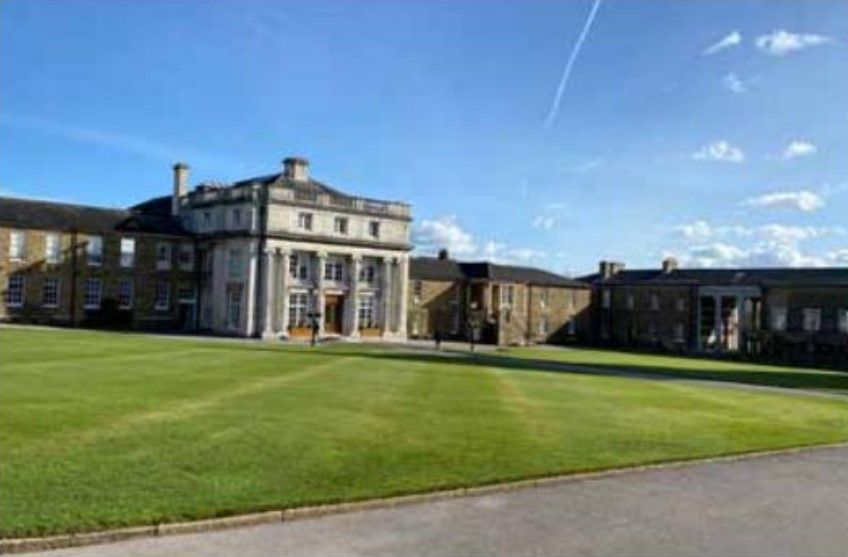 “I didn’t know too much about the school but I looked into it and it looked impressive. When I came down for interview I was blown away by the buildings and the wonderful grounds.

The school had a really positive outlook into how they wanted to move forward and it was they who sold me the school and its potential,” explained Andy.

And that potential is truly huge.

The total area of 520 acres, all on one site, includes 300 acres of woodland.

“Woodland management is new to me, but I do enjoy it,” revealed Andy. Pitch wise, there are 17 grass pitches, two astroturf pitches, five cricket squares – soon to be eight squares to embrace girls’ cricket which the school wishes to expand.

“There is a masterplan in place stretching forward into the next 10 years and beyond with most of the facilities being upgraded. This is going to include a new cricket centre, new astroturf pitches, fitness suites, sports centres etc. It is really an exciting time to be involved here as we are right at the start of that programme.”

“It’s a bit like selling a house. It is those first 20 or 30 seconds which leaves the biggest impression for the prospective pupil and parents. It is the feeling they get in those first couple of minutes, when they are driving into the school, and it can inform their whole outlook into whether they are going to invest the money into sending their child to that particular school.” 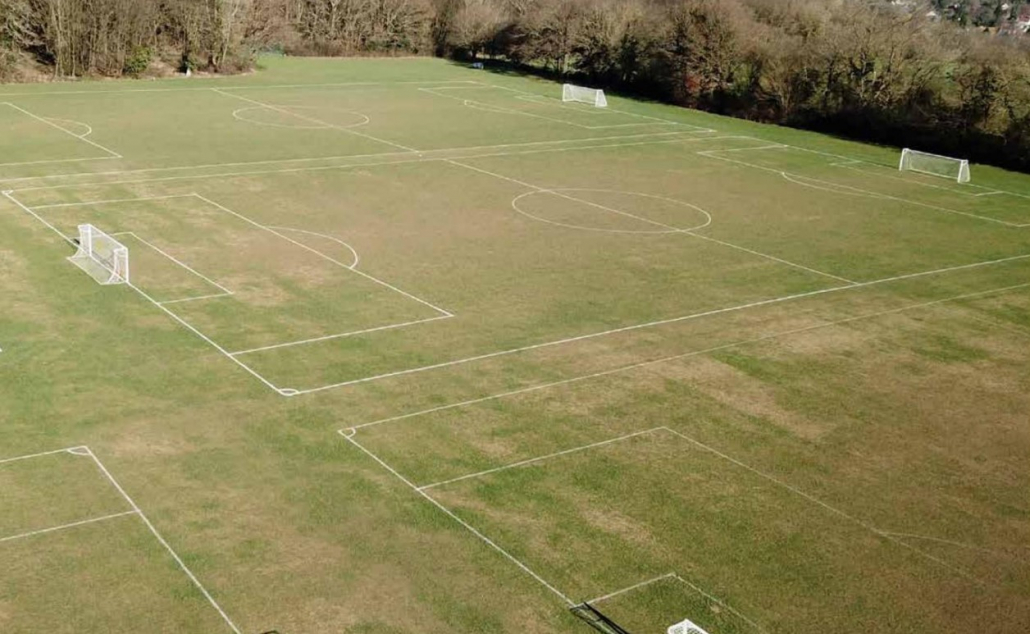 “It is our job to produce the best surfaces, grounds and gardens as we possibly can, and help influence that decision.”

Andy and his new team have very much hit the ground running and within his first two months in post a lot had already been achieved.

“In my first week we fraised mowed all five cricket squares and took three quarters of an inch off each square,” said Andy, revealing that it could have been the first time it had ever been done.

“We also fraised mowed the first team cricket outfield and took 20 mm off it and then we completely reseeded it.”

A recently appointed team at the head of the school, including a new Headmaster, has brought a vision to Haileybury and an ambition to improve standards. This includes a battery of new equipment.

“We are slightly limited on the machinery that we’ve got at the moment but I am working on a machinery replacement programme which will operate on a rolling basis. The school realises that it must invest in machinery and is well aware of the sort of money that will be required.”

“I have always done my own renovations and try not to use contractors at all and be completely self-sufficient. To me it’s the most important part of the job and you live and die by your renovations. I don’t like playing the blame game. We are the people who are going to be working with the pitch going forward so we are going to make sure it is right in the first place and if we don’t get it quite right we learn from it and do it right next year.”

“So, it means we need our own kit. We did a couple of passes with the GKB machine and there was a couple of wickets I still wasn’t happy with so we did them again, we got the surface exactly how I wanted. If that had been a contractor they might have done the two passes and gone on to the next job. 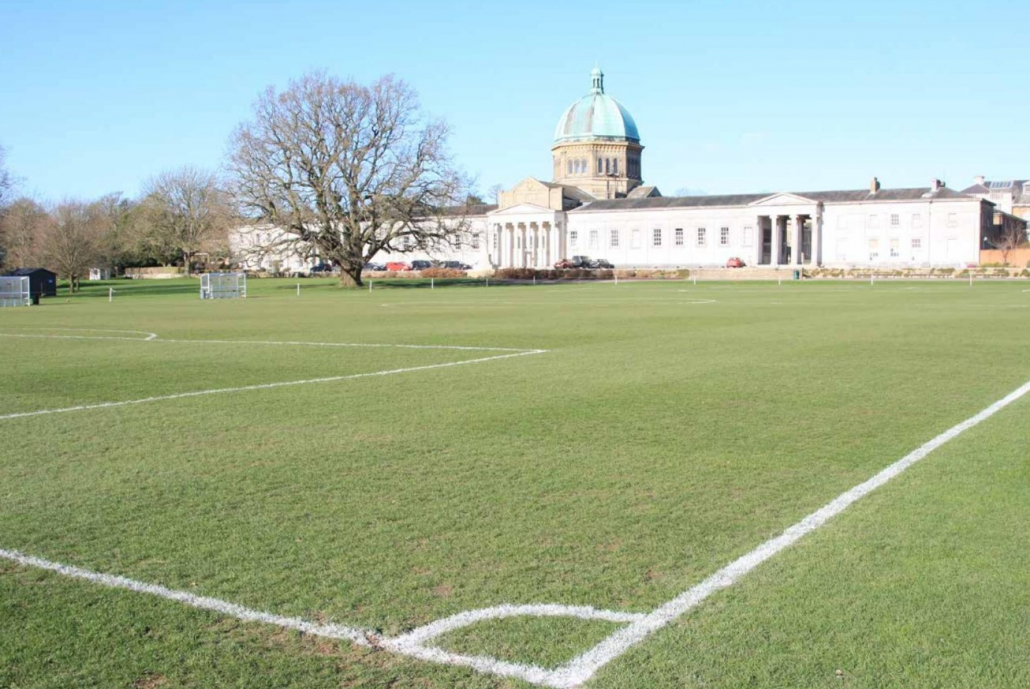 With a man possessing of such a perfectionist streak the answer to the question, “What are your own expectations for Haileybury going forwards and that 10 year plan?” brought about the expected response.

“I’d like to get there before then. I’d like to think that in 12 months people will have started to take notice of Haileybury’s pitches, heard about us and will have seen lots of the things we have done. Within three years I’d expect it to be on a par with quite a lot of the other schools and then, within five years, I’d like it to be pushing to be as good as it possibly could be.”

“I’d like it to be THE school in the south of England, it not the country. I want Haileybury to be known for having the best sports pitches and grounds in the country.”

And that ambition is shared by the rest of the school.

“My thoughts are mirrored by the Master, the Bursar, the Estates Bursar and the Director of Sport. We all want to get to the same place, be as good as we can possibly be and be the place to be.

It really is an exciting time to be here.”

Andy has been able to make a sharp start to fulfilling those ambitions because of his time within the industry which means that manufacturers and dealers are happy to lend him machines until such time as his new battalion of machinery arrives.

He has been delighted by the manner in which his staff – there are 12 in total including himself – have bought into the new regime.

“After I was offered the job I met the staff. They put a chair in the middle of the room and I outlined my thoughts. To be honest I’ve never known a more enthusiastic staff. They wanted to change and be let off the leash.”

“I told them that I’d come here to make the school the best in the country and that I wouldn’t leave until I’d done that. If they gave me 100% I’d give them 150%. They have all bought into that and are enthusiastic about doing new things. We’ve started to hand cut the rugby pitches so they are walking behind mowers for the first time.”

“The keenness of the staff was what sold me the place as much as anything.”

In general terms Andy is delighted to be a part of a thriving sector on the amenity turf industry. 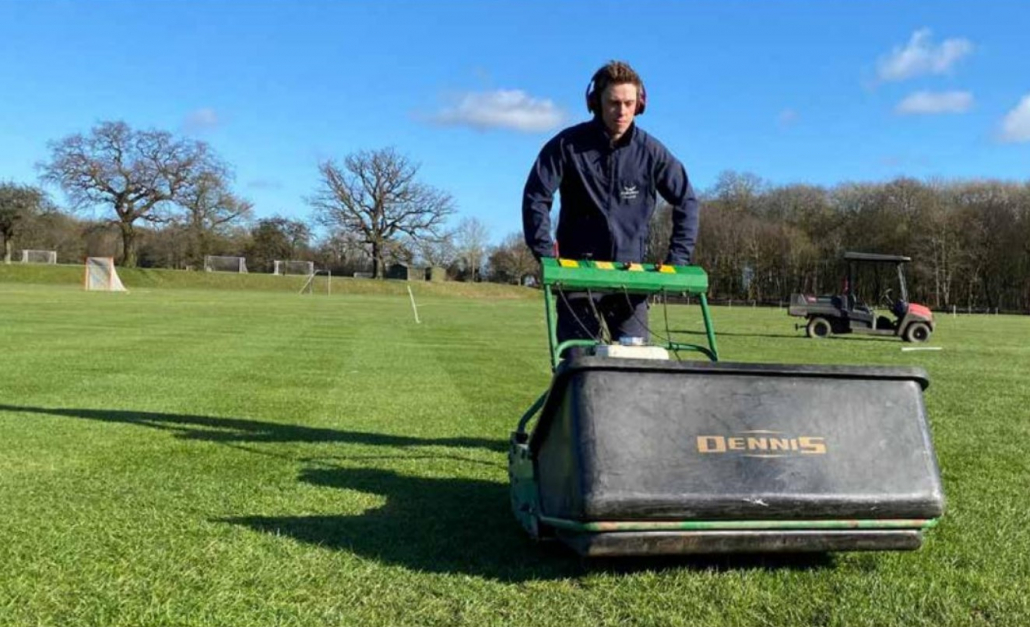 “To me the schools’ sector is almost in a league of its own and an extremely strong part of the industry. We all have to be multi-taskers and be able to lay out an athletics’ track as well as producing high quality football and cricket surfaces. We are evolving, there is money available and everyone is pushing each other,” said Andy.

“I know most of the Grounds’ Managers at most of the independent schools in the country and we all get on well. They all love what they are doing. Time goes so quickly because we are all working one term ahead of ourselves. In the rugby term you are already planning what you need for the football term and in the football term you are already planning what’s happening in the cricket term.

“I absolutely love it. I’ve worked in professional football, having been Head Groundsman at Birmingham City for five years, but I can’t see me ever moving into any other part of the industry,” revealed Andy, who attributes social media for promoting the work of groundsmen and for promoting the quality now seen at schools such as Haileybury.

“People who had never been to Shrewsbury School knew about the quality of pitches we had and that was in part down to Twitter.”

Those who know Andy well, know that he will achieve his goals, no matter how high the bar is set, but to help him all he needs to do is return to the work of that famous Old Boy, Rudyard Kipling and his magnificent poem, if he reads on to the final verse and the last five lines he will find whatever inspiration he requires for what lies ahead:

If all men count with you, but none too much
If you can fill the unforgiving minute
With sixty seconds’ worth of distance run,
Yours is the Earth and everything that’s in it.
And – which is more – you’ll be a Man, my son!

It’s all about Grass Seed