Quad Bikes Tear Up Football Pitch: Pitches at Solway Banks in Brynteg were damaged again by tyre tracks at the weekend, leading to Brymbo Lodge FC coach Kieran Howard to hit out at the vandals for ruining children’s football.

He says they are also putting lives including their own in danger with reckless behaviour. He added that the Brymbo and Brynteg area is suffering anti-social behaviour being caused by youths, some of whom he believes may even have played for his club in the past, and has urged them to think about the consequences of their actions. 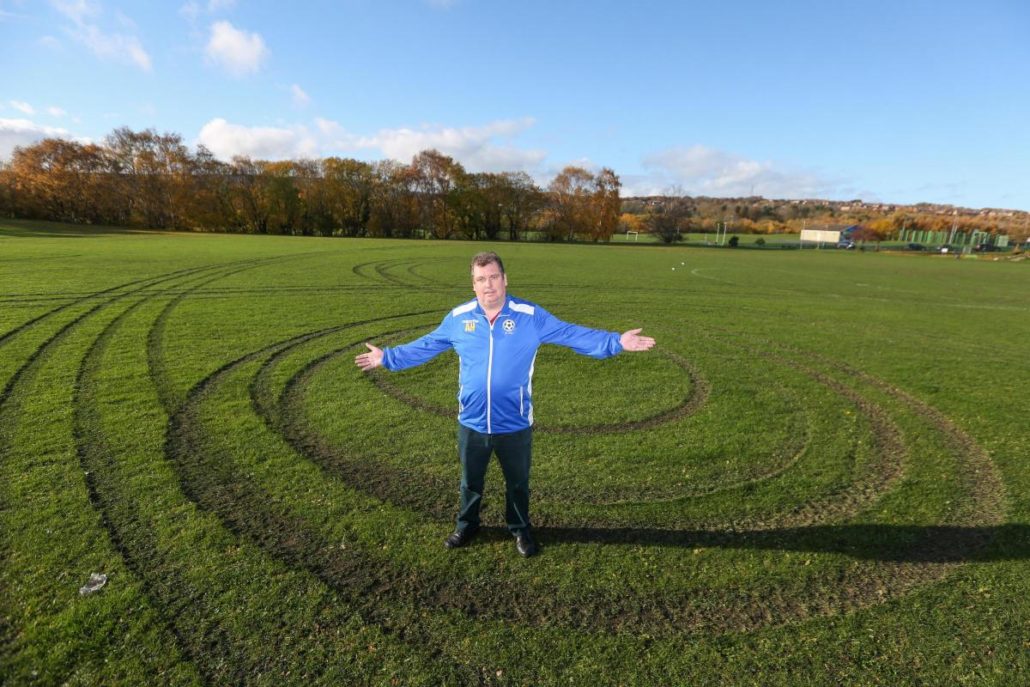 Coaches, youngsters and their parents were left dismayed when they turned up to pitch two at Solway Banks this weekend and found it had been cut up again by a vehicle.

“It looks like they have come through the back way, where there are no defences against cars, bikes or quads”, Mr Howard said.

“Talking to a few of the lads it looks like quad bike tyre marks and we’ve had problems with four-by-four vehicles in the past.

“We have more than 200 players at the club, it is affecting them all from the under-six’s upwards and stuff like this is going to hamper their opportunities.

“The club is a community hub and this is the kids’ green space. We all meet up – parents, kids and volunteers and to come here and see this, it’s sad.

Mr Howard added that there had been problems with anti-social behaviour in the area of late, and felt he had to speak up – with concerns about the dangers of vehicles being used in an area where children play.

He said: “A lot of anti-social behaviour is going on over that way. This follows on from the problems we had on Bonfire Night.

“I’ve already asked for a zebra crossing to be put in because you have to cross the road to get from pitch to pitch.

“As a local I’m sad to see what is happening to the reputation of this area. A small minority is giving it a really bad name at the moment.

“People come here to play from all around, Brymbo, New Broughton, Pentre Broughton and other villages.

“Some of the people involved in this behaviour could have family who play for the club and possibly even played for us themselves when they were younger, so I don’t know why they’re doing it.

“Perhaps they think its funny but they aren’t thinking of the consequences. Someone’s going to get hurt and a child could lose their life up there through reckless behaviour.

“I just want them to think about the consequences of their actions.”

Councillor David A Bithell lead member environment and transport said: “Vandalism of football facilities and fields causes disruption to those who play and use these facilities.

“I hope those responsible are caught and made to make good any damage.”

Gwenfro County Councillor Nigel Williams added that he was working on solutions to try and prevent vehicles getting on to the pitches.

He said: “I have already asked Streetscene to put some obstruction at the entrance to stop vehicles gaining access.”