Set within the royal grounds of Home Park where King Henry VIII once hunted deer and with the beautiful Hampton Court Palace looming in the background, there could hardly be a more regal setting to enjoy a round of golf. 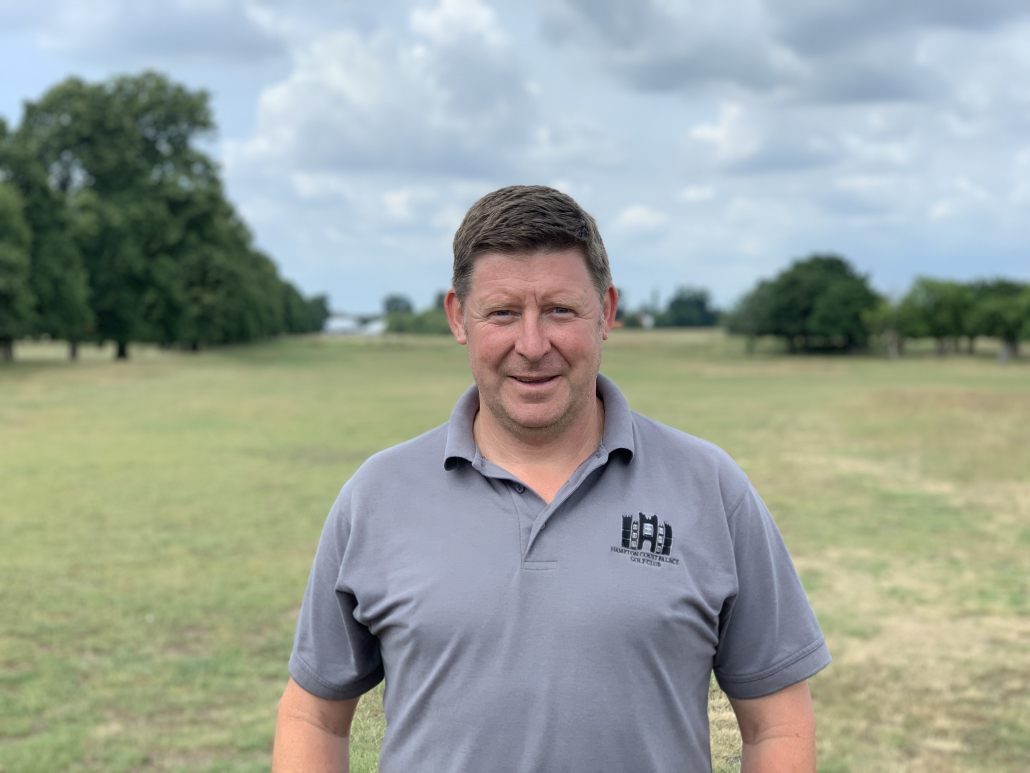 The acclaimed 18-hole course is a 6,513 yard, par 71 parkland and inland links course which dates back to 1895. It was later re-modelled by Willie Park, who was also the designer of Royal Birkdale and Sunningdale, leaving the course beautiful yet demanding.

Richard Hill has been at the Club since May 2008 and was promoted to the position of course manager in 2013. Throughout his time Richard has maintained the course to an excellent standard despite some obstacles such as the huge 16th century lime-trees which surround the course and a bizarre lack of rainfall – as he explains.

“This site is an absolute anomaly when it comes to rainfall,” he says. “It can rain at the nearby Heathrow airport, it can rain on the M4 motorway but just not rain here at Hampton Court. I have my theories on why but that is another matter!”

As a result, the lack of rainfall tends to apply more pressure on the fairways at Hampton Court and Richard admits to embarking on a lengthy search for a winning formula which could help to relieve some of the stress.

“I was always looking at options that could make an improvement to the fairways and I tried so many different combinations of wetting agents and seaweeds – believe me, I must have tried all of them. The best results by far has been from Goemar seaweed and Excel wetting agent from Sherriff Amenity. When I first applied them, the fairways went from brown to green in just a week.”

Goemar is a high quality liquid seaweed extracted using a unique cold process that removes unwanted alginates and cellulose to leave a 100% seaweed juice. It is harvested in Brittany where they have some of the strongest tides in the world and these extreme tides lead this seaweed to experience high exposure to sun and heat at low tide. To counter these stresses the seaweed produces high amounts of the active ingredients required for plants to survive long stress periods. The cold extraction process then concentrates these ingredients in the finished product and Richard explained just how unique it is.

“Quite simply, it mixes perfectly,” he said. “You get all of the benefits without the organic matter and therefore the plant responds a lot quicker. It is full of beneficial sugars that combined with the Excel wetting agent, helps the grass to hold on to the nutrients. It is perfect for fairways.”

Its tank-mix partner Excel is a multi-purpose, low dose wetting agent which is ideal for use on larger areas, such as golf fairways and sports pitches.  For the tank-mix he applies Excel at 1 L/ha and Goemar at 3 L/ha but due to the weather conditions Richard believes that timing is key.

“I don’t have a set time to apply the products, instead I spray when I feel it is needed and when we have the correct weather window. Historically I used to have everything all in one tank – the fertiliser, the wetting agent and the seaweed but now I do it separately. So, I will apply my feed one day and then the seaweed and wetting agent another day.”

For his fairway feed, Richard relies on Sherriff Amenity’s Evolution Xtra Soluble 46.0.0 and feels that he now has the ideal products in place.

“I will always get an application of the Evolution Xtra out so that it is sitting there waiting to take all the nutrients in. It washes it down to the roots and then away it goes. It might be six weeks from when we spray the feed to when the Goemar and Excel go out and you can really see the benefits. The colour is great and you can see the Poa still hanging on which you normally wouldn’t see.

“I remember when we first applied this combination and they looked like different fairways.

“I will continue with this method because I want to encourage more water to go down to the roots and these products are doing the fairways a world of good.” 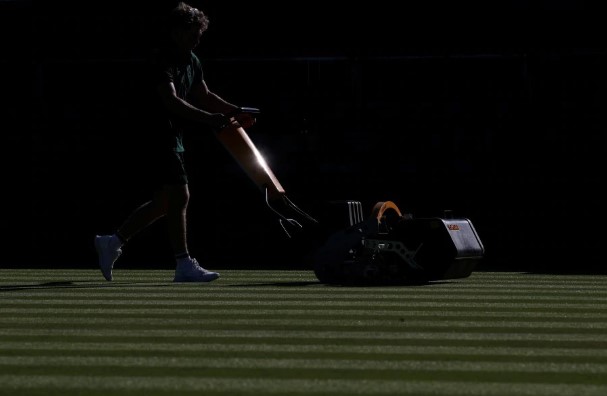 Centre Court Steam Cleaned: The famous Centre Court at Wimbledon has been steam cleaned to kill off any nasty pests lurking beneath the surface, head groundsman Neil Stubley said.

The All England Club first trialled steam sterilising in 2017 and is now rolling it out around the courts.

The technique involves covering the grass with polytunnels, drilling holes into the soil and blasting in steam, as the club adapts its practices in response to climate change and environmental concerns.

“We’ve started looking at alternatives to managing weeds, pests and diseases. We’re looking at steam sterilising as part of our annual maintenance of the courts.

“As soon as you take that steam away, it’s just cold water. There’s no residual effect.”

The technique has been used for around a century, particularly in the Dutch glasshouse growing industry.

“We put loads of holes in the court beforehand and then we start pumping the steam in. As soon as we hit 70 degrees Celsius, we know that it’s killed anything like spores or pests that may live in the soil.

“It gives us a complete clean surface. Then we shave the top off and then we reseed it and grow it back in for the following year.”

He said each court might need the treatment every five to 20 years.

Besides Centre Court, the Courts 12 and 18 show courts have also been done, with Court One, the second-biggest, in line to be done after this year’s tournament.

Managing the 18 competition courts and 20 practice courts is a year-round operation.

Each court is reseeded with a brand new surface after each championships.

The grass was changed in the early 2000s from a creeping grass to a more tufted perennial rye grass, meaning the courts are harder.

The firmness of each court is measured 25 times a day which informs how much water is sprayed on during the night. The drier the court, the more it is irrigated.

More than 20,000 measurements are done across the two-week Championships.

“Each year is a challenge because you’ve got a living surface. As much as you try and manage it, it will be invariably dictated by the environment.

“This year, it’s a fairly nice, even temperature. It’s low 20s, a bit of fair-weather cloud, nice blue skies, a slight breeze. It’s perfect for the player, the spectator and the grass.

“If you get a wet, damp day, the moisture in the air will naturally find its way into the plant and that becomes a little bit greasy. The beauty of grass is that you have to adapt to the environment.”

Stubley said there were 70 or 80 different plants around the grounds and some people come to see the horticulture as much as the tennis.

The flowers are rarely stolen but sometimes spectators sit on them. 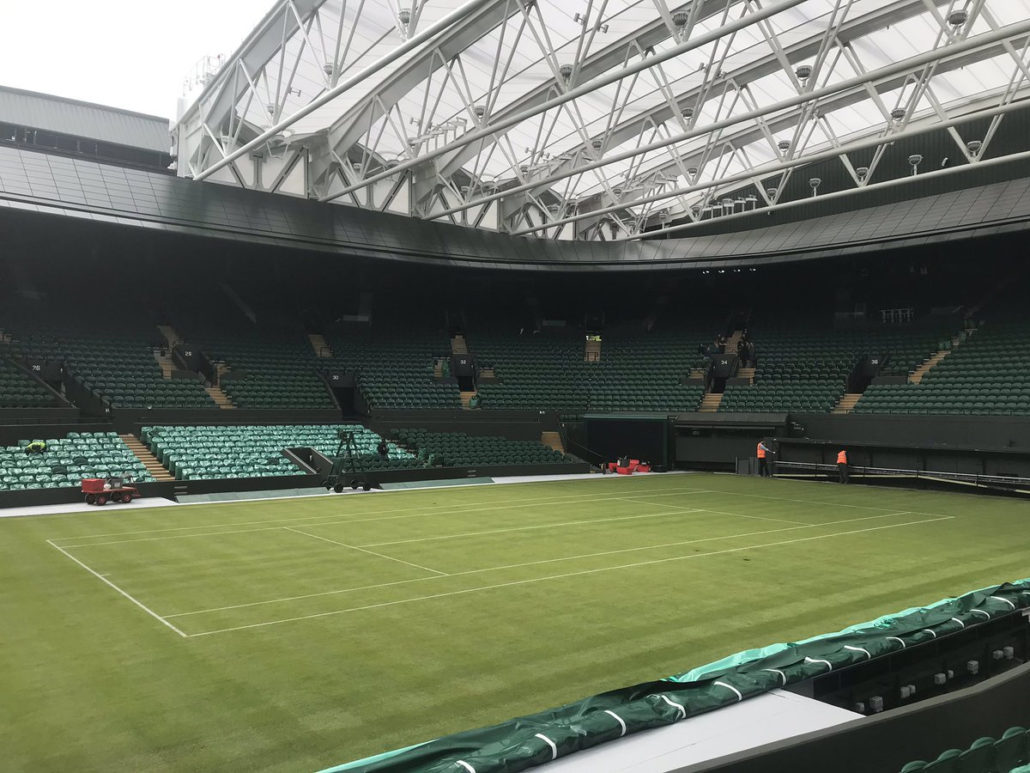