Village cricket clubs step up security after spate of equipment thefts: Police concede cuts to number of officers in rural areas make it difficult for them to protect cricket and other sporting clubs. 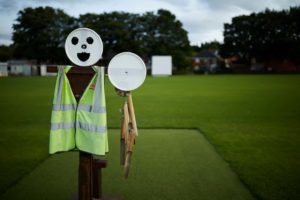 Cricket clubs are being forced to invest in expensive security systems and face soaring insurance bills after a spate of thefts that is putting pressure on the grassroots game.

Organised gangs are being blamed for thefts of everything from groundskeeping equipment to alcohol – and even, in one bizarre case, a section of artificial pitch that the club believe was stolen to order.

Privately, police concede that cuts to the number of officers, particularly in rural areas, make it difficult for them to protect cricket and other sporting clubs.

he pattern echoes a broader trend in countryside crime, according to the insurer NFU Mutual, which reported a 20% rise in the cost of rural theft in the first half of 2017.

Among the clubs whose summers have been blighted is Upottery CC in east Devon. After years of planning and fundraising, the club moved to a new ground just outside the village. Three weeks later it suffered its first ever break-in when a shipping container was smashed open and £10,000 worth of mowers were stolen.

“We had worked so hard on the move,” said the groundsman Nigel Wyatt. “It felt like a real kick in the teeth.”

The club had not previously been able to get insurance when it stored its equipment in a shed at its old ground, but its location in the centre of the village made it safe. “We were naive in not getting insurance for the container at the new ground,” said Wyatt.

Upottery managed to keep playing by getting hold of second-hand equipment, and they hope the England and Wales Cricket Board (ECB) will help them buy new machinery in the winter.

Forty miles away in west Devon, Ashburton cricket club is counting the cost of three break-ins in 10 days. Equipment, alcohol and food were taken. “It’s demoralising,” said the club chairman, Jerry Crouch. Cash that could have been spent on the fun bits of cricket – bats, balls, training equipment – is having to be invested in CCTV and an alarm system. The club has also launched a crowdfunding appeal. “We’re a small club and really can’t afford this sort of thing,” said Crouch.

In this case, Devon and Cornwall police are doing what they can to help by starting to exercise some of their dogs on the Ashburton grounds to deter thieves. But the force accepted it was difficult for it to help secure rural cricket clubs.

spokesman said: “Even before the cuts we would have limited night-time patrols in small rural areas, let alone at completely isolated locations. Quite often cricket clubs can be in isolated locations. This means that break-ins aren’t usually discovered until the groundsman discovers it the following day. We advise clubs to attempt to be as secure as possible, and for the public to call us if they see or notice anything suspicious to allow us to respond.

“Some of the more recent break-ins have been people stealing equipment and alcohol, plus criminal damage. We would strongly urge the investment in CCTV, to ensure that takings and cash floats are not left in tills, and that valuables are left securely stored. We also ask that if they haven’t already, that they join and work with local neighbourhood watch groups and their local officers to improve the sharing of information and to help us identify possible growing trends which we can respond to accordingly.”

It is not just clubs in the south-west that are suffering. Clubs in Staffordshire, the West Midlands, Yorkshire, Surrey and Lancashire have all reported thefts this season.

Clubs report that many of the raids appear to be well-planned and organised and believe that in many cases criminal gangs are to blame. One tactic thought to be in use is to steal old equipment, for scrap if it not worth selling on, and then return to take brand new replacement equipment.

A spectacular raid took place last week at Egerton cricket club in Greater Manchester. Masked thieves broke in, fastened one end of a cable to a safe in the beer cellar and the other to their car and tried to haul it out. They failed but caused damage and worry.

The ECB is advising clubs that feel they might be at risk to seek advice from police, though it said it had no evidence that clubs were being singled out more than other organisations

A spokesman said: “We will always offer support and advice to clubs who are victims of vandalism or any other similar incident. This is done on a case-by-case basis working closing with the relevant local county cricket board.”

Perhaps the oddest theft of the summer took place at Hunslet Nelson cricket club in Leeds. One night thieves made their way on to the club’s ground and neatly cut a 4m by 3m piece from the newly laid artificial wicket.

“We couldn’t believe it,” said the club secretary, Brian Calverley. The club does not believe this was an act of vandalism. “They did too neat a job for that. We think it was stolen to order for a back-garden play area or perhaps a golf putting green.”

The club’s insurance premium rose by £150 this year and will rise by another £350 next following the theft. “It makes it so much harder for us to run the club. We’re amazed at the lengths the thieves went to. You’d think it would be easier to get an ordinary job.”