Angels crowdfund to protect pitch: Tonbridge Angels Football Club has launched a crowdfunding campaign to raise £35,000 so that it can purchase covers and carry out urgent work on the pitch and drainage system at Longmead.

The plea comes with the club’s finances suffering severely after a succession of home games at the stadium have been postponed due to waterlogging. 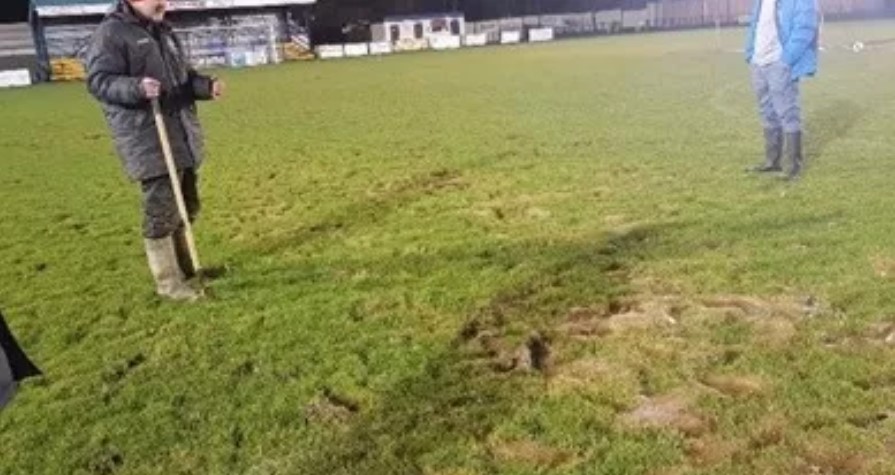 Incessant rain has meant the ground has been too wet to satisfy the National League’s requirement for player safety, and the club has only played at home once since January 4.

On Monday (March 16) the league announced that all fixtures would be postponed until April 3 in response to the coronavirus outbreak.

Three days later the Football Association said football would not resume until at least April 30 – though the governing body intends to try and complete the season during the summer.

When the season resumes, they may have to complete the campaign by playing at other club’s grounds, which means they will have to pay a fee to the hosts and also miss out on crucial bar and catering revenue. The National League has given them permission to do so.

The club was promoted after winning two play-offs last year to reach its highest ever league position but now faces a battle to avoid relegation with a congested fixture list until the end of the current campaign.

They had to call off the much-awaited local derby against Maidstone on March 10 – which was originally supposed to be played on Boxing Day.

The club is expecting its biggest crowd of the season for the visit of their rivals – the last league fixture in 2014 attracted 1,168 fans, double the usual gate – but the fixture has now been cancelled three times.

The Angels chairman Dave Nethercott wrote an open letter to fans admitted that it was ‘running out of money’ and asking for financial help.

The club is owned by its supporters, who pay an annual fee in return for having a say in the way it is run. But Mr Nethercott said they needed to raise a minimum of £7,600 per week for the last eight weeks of the season, or more than £60,000.

An emergency meeting was called on March 5 to discuss the options for ground renovation in order to avoid a repeat of this winter’s flooding.

Peter Elves, the head groundsman, said the drainage has ‘now outlived its working life’ and that three games have been allowed to be played that have compromised the playing surface.

One suggestion was to install an artificial surface which, with new floodlighting, would cost between £500,000 and £600,000.

However, such a move would take two to three years to complete, and a more immediate solution needs to be found.

So the club has decided to buy covers to protect the playing surface while also carrying out renovations of the existing underground drainage.

A spokesperson said: “Our pitch at the Halcyon Wealth Longmead Stadium has served Tonbridge Angels FC well over the past 40 years and has been witness to scores of exciting matches.

“It’s fair to say that it’s starting to feel its age somewhat – in particular the underground drainage system – and this has not been helped by the record rainfall of this winter.

“Urgent major renovations are required which include the procurement of state-of-the-art covers if we are to maintain a high standard of semi-professional football in the town.”

He added: “Please donate whatever you can spare to this community based club largely run by volunteers to ensure we are able to provide football in Tonbridge for spectators to enjoy and for future generations of young people to compete in the UK’s national game.”

To make a donation visit justgiving.com/crowdfunding/tonbridge-angels