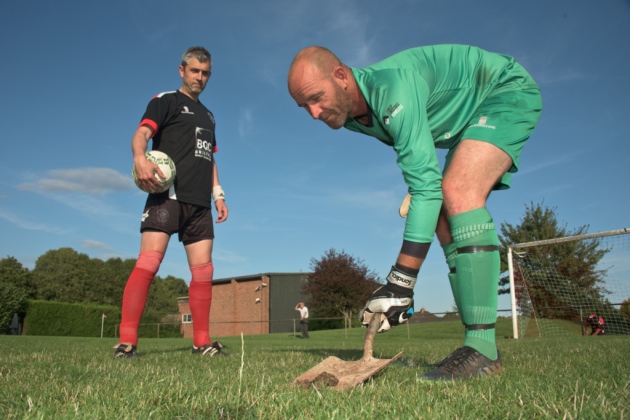 Groundsman Pleas To Dog Owners: A football club groundsman has slammed irresponsible dog owners for not picking up their pets’ faeces, which has been left scattered across a village field which is used to host matches.

Long Ashton Football Club stalwart Davy McGimpsey believes the amount removed by players is ‘nothing short of disgraceful’ and it is a problem the club faces ‘every week’.

He said the issue at Long Ashton’s Community Centre, where the club plays and trains, is ‘major and dangerous’ and he is urging people to ‘clean-up their act’.

Davy said: “The problems with dog poo left on the pitch is worse now than it has ever been.

“It has become an issue before training and we have to pick up a lot of the waste before we can even attempt to play.

“We have had to stop matches due to faeces being left on the field, and I couldn’t count the amount we had to pick up on one hand before a game in July.

“Genuine dog walkers clean up, but this is an epidemic.

“We’ve invested in a shovel to get it all up and ‘no dog fouling’ signs have been installed at the centre to help tackle the problem.”

Davy first took to social media to address the issue in April, but some owners have paid scant regard to his plea.

This prompted Davy to question if dogs should be banned from the field.

The football club’s players, aged 16-60, compete with clubs from across the West Country, and members practice on Tuesday evenings at the centre during the summer.

He continues: “The other issue is dog poo is normally left right by the community centre’s play area.

“People need to understand how dangerous this is, especially if children end up picking it up.

“There are dog bins dotted around the centre, and, for whatever reason, some people don’t think about using them.

“It’s just not nice, and there are now people in the club who just refuse to pick it up.

“It annoys us, this group is something great which runs in the community, and it is not the centre’s problem to deal with.

“It’s simply unacceptable, and it begs the question, should dogs be allowed on the village field at all?”

In addition to its pleas to dog owners, the club has also put a ban on plastic bottles in an attempt to reduce waste on the pitch.

Dog Handler Rescued By Tractor: When Mary Grant dislocated and broke her ankle at work, paramedics were struggling to find a way to get her safely to the ambulance. Mary, a senior dog handler at KDW Doggie Day Care in Kelty, Fife, was teaching puppy agility at the centre when the accident occurred on May 16th.

There are twenty-five acres where the dogs can run and exercise and she was stranded in a hilly area a big distance from the car park. Quickly on the scene the paramedics attended Mary and had her strapped onto the wheeled stretcher. The question was, how to get it across three undulating fields to the waiting ambulance?

“Even though she was obviously in a lot of discomfort, she still saw the funny side when she laid eyes on the makeshift rescue vehicle. No air ambulance for her I’m afraid.” Said Debbie Clarke, KDW’s owner. 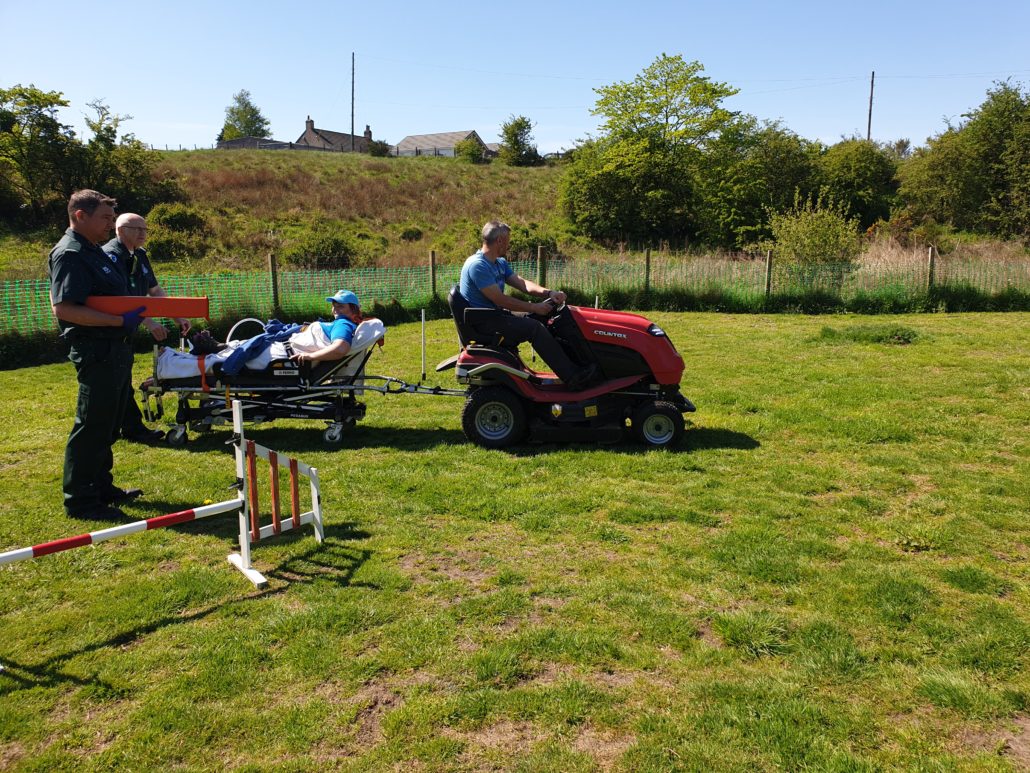 Instead, they hitched up the centre’s own Countax 4×4 garden tractor to the trolley and carefully towed her out. Mary is due an operation and will be in hospital for a short while. She says she’ll remember the day, not for the accident but for being rescued by a garden tractor.