The decision by the US-owned company to build in Britain follows industry analysis which showed exceptional growth in demand for zero-turn mowers in the UK and Europe in recent years. Until now, zero-turns have mainly been imported from the US. 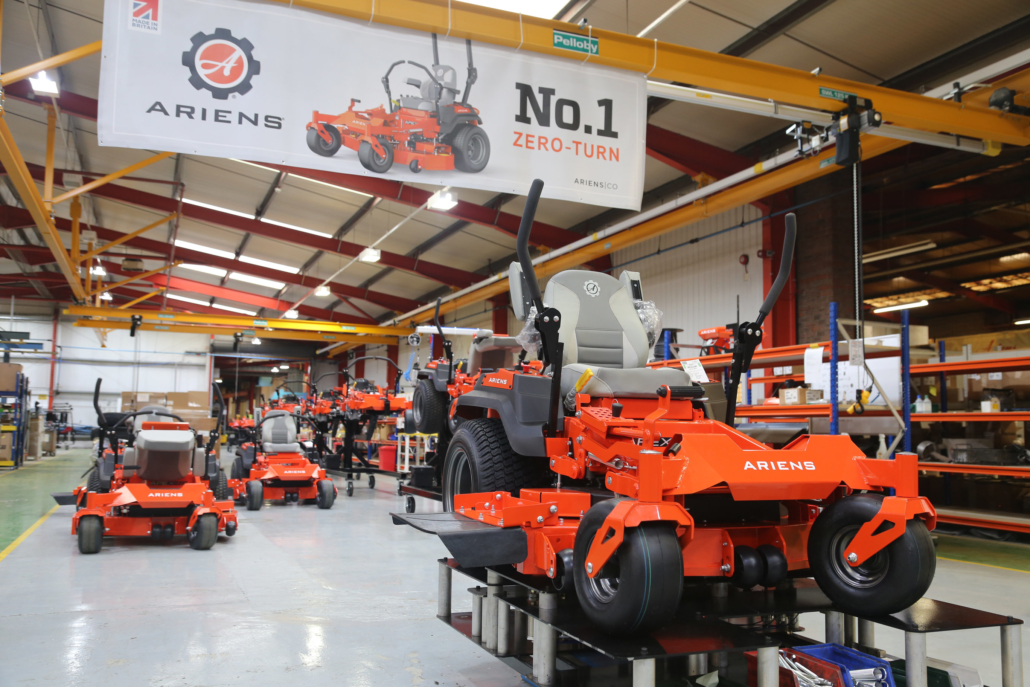 “Sales of zero-turns in Europe have experienced outstanding growth over the past three years,” says Darren Spencer, AriensCo Vice President – EMEA and Asia. “We have experienced this growth in numerous markets and, based upon extensive research with our distribution partners, we expect the progress to continue. The industry analysis points to the many opportunities to be met by producing zero-turns at our Great Haseley plant. We currently sell into ten different countries within Europe and aim to increase our European footprint in 2020.”

Future growth is predicted to accelerate as the benefits of zero-turn mowers are understood by potential customers, namely increased speed of cut, greater versatility and overall productivity. Zero-turn production in the UK is seen to offer significant advantages, allowing for rapid delivery and improved availability throughout the year. There is also the potential for zero-turns to be adapted with features and benefits to meet local market needs. AriensCo says they have made a significant investment in the Oxfordshire factory with the new zero-turn production line, fixtures and tooling. A number of CE zero-turn models will be produced for European markets and close collaboration with the US will be maintained to match up to Ariens’ reputation for manufacturing quality, says the company.  Increased utilisation of the Great Haseley factory has provided operational cost benefits and will generate a number of new jobs for the area. 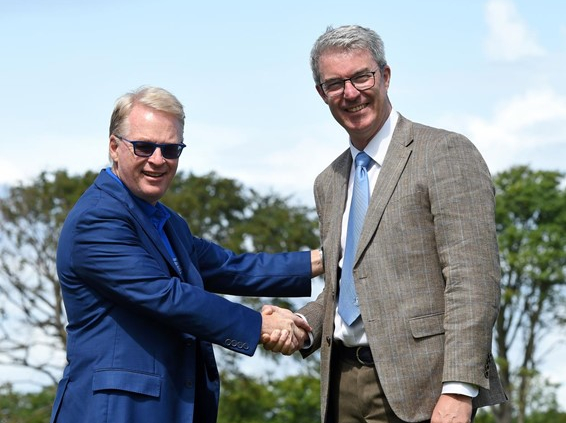 European Tour & Toro Renew Partnership: The European Tour and The Toro Company have extended their long-term partnership by four years, as the worldwide provider of outdoor environment solutions celebrates its 100th year serving the golf industry.

The renewed agreement takes the European Tour’s relationship with Toro to more than 20 years,   meaning they will continue to supply turf maintenance and irrigation products across the European Tour, Challenge Tour and Staysure Tour in Europe, the Middle East and Asia, as well as servicing the European Tour Destinations portfolio of world class golf venues. 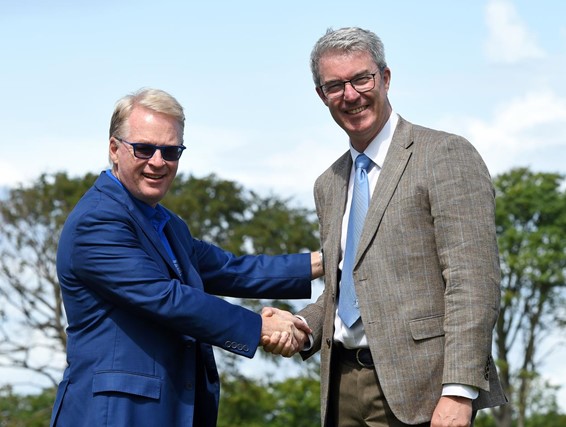 The agreement is a highlight of a milestone year for Toro as it celebrates a century of innovation in the golf market, which started with the introduction of the industry’s first motorised fairway mower in 1919.

Keith Pelley, Chief Executive of the European Tour, said: “The Toro Company has a long history of excellence in the golf industry, and we are delighted to extend a relationship which is instrumental in presenting host courses across the world in the best possible condition.

“Toro is a company that shares our values in areas such as sustainability and innovation, and we look forward to working with them over the next four years, extending one of our longest-running supplier associations.”

Andy Brown, Senior Sales Manager EMEA at The Toro Company, said: “We are proud to continue our longstanding relationship with the European Tour as official supplier of turf maintenance and irrigation products.

“This has been an important relationship for The Toro Company over the past 20 years, and we look forward to continuing to provide equipment and support. It’s a privilege to have a role in preparing world-class courses for some of the greatest players in the game.”

Toro products that range from mowers and utility vehicles to bunker rakes and irrigation systems, have become synonymous with quality, durability and value. Away from golf, the company’s products are used at venues and events including the Château de Versailles in France, Real Madrid Club de Fútbol in Spain and Walt Disney World® Resort.

Campey To Exhibit At European Show: Campey Turf Care Systems is set to take their Dakota, Air2G2 and Campey range of machines to National Grasdag, Belgium and Groen Techniek, Holland, in September.

The 13th edition of National Grasdag is taking place in Pittem, West Flanders, on the 4th and 5th September with the introduction of practical demonstrations alongside the exhibition. Groen Techniek is into its fourth year, with the three-day show taking place from the 10th to 12th September at the Walibi Fairgrounds in Biddinghuizen. 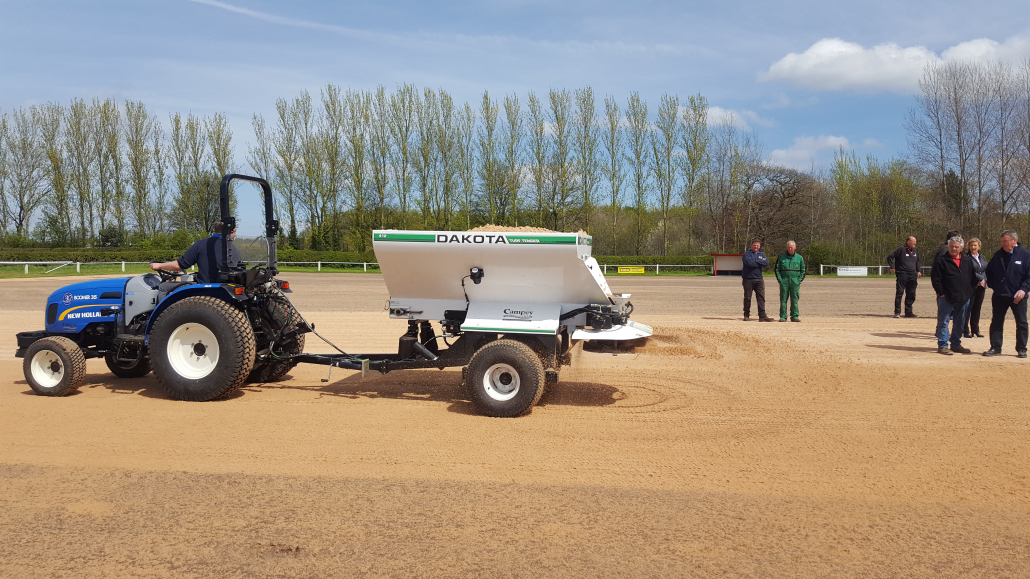 A team of Campey product specialists will be at both shows to talk attendees through some of the industry’s most innovative aeration, spreading and grooming equipment, including the Air2G2 and Dakota Turf Tenders.

Aeration is a vital maintenance practice for any grass area, and the Air2G2 allows turf professionals to aerate as and when they need to with no disruption. The machine comes with probes at working depths of 7” (17.5cms) or 12” (30cms) as standard, and optional probes of 6” (15.25cms) or 9” (23cms), giving turf professionals the option to tackle compaction at any level.

The Dakota range of top dressers spread light, heavy, wet or dry material while offering exact and variable spreads. There are eight models of varying sizes that cover small pedestrian machines to larger towed options. All spreaders are built to suit customer requirements and ensure that there is a Dakota for every situation.

Among the Campey range of products will be the recently released Uni-Scratch. This machine is the ideal solution for professional and effective maintenance of natural grass and can also be used for the final organic matter removal on natural grass hybrid carpet pitches when carrying out annual renovations.

Joining it in Holland and Belgium will be the UNIRAKE. Users can adjust the severity of grooming to remove organic matter or simply stand the sward up to encourage growth, with altering the intensity taking no less than 30 seconds. 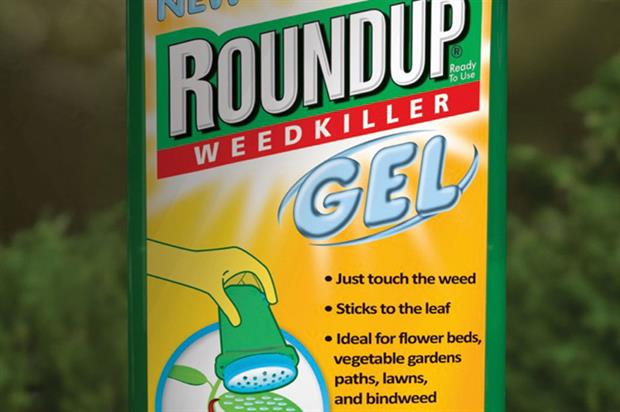 The relicensing follows months of indecision by the EC. The EC Appeals Committee finally reached a qualified majority to renew glyphosate for five years.

The decision to grant the herbicide a licence for a further five years was reached by the EU Commission’s Standing Committee on Plants, Animals, Food and Feed, comprising representatives of the 28 member states, after a series of meetings this year failed reach consensus.

The approval comes just a few days before the current licence expires on December 15, which left many professional users in the horticulture industry fearing a sudden ban with drastic effects.

Health Commissioner Vytenis Andriukaitis said: “Today’s vote shows that when we all want to, we are able to share and accept our collective responsibility in decision making.”

Crop Protection Association chief executive Sarah Mukherjee said: “Whilst we are pleased that the science has eventually prevailed, the politicisation of what should have been a standard re-approval process sets a worrying precedent for the future of crop protection and sustainable farming in Europe.

“The loss of glyphosate would have caused significant damage to the economy, the environment and the agricultural sector.

“British farmers will be relieved that this vital tool will continue to be available to them, and they will be able to continue to do what they do best, providing us with safe, healthy, affordable food.”

NFU vice president Guy Smith said: “It is good news that farmers and growers will be able to continue using glyphosate for another five years. However, the fact remains that there is absolutely no regulatory reason why it should not have been reauthorised for 15 years, as was originally proposed.

“Independent regulatory bodies around the world, including the European Food Safety Authority (EFSA) and the European Chemicals Agency (ECHA), have looked at all the scientific evidence and concluded glyphosate is safe to use. But their conclusions have been ignored and their credibility has been undermined.

“Glyphosate reduces the need to use other herbicides, it helps to protect soil and cut greenhouse gas emissions by reducing the need for ploughing, and it enables farmers in this country to grow crops that help produce safe, affordable, high quality British food.”

MEP Anthea McIntyre said: “The scaremongering and indecision over this product had left farmers and growers fearing they were staring over a cliff edge, so this will be greeted with enormous relief.”

A World Health Organisation report labelled it a suspected carcinogen; but a large body of peer-reviewed studies have shown this not to be the case.
McIntyre, member of the European Parliament’s Agriculture Committee, added: “It should never have taken this long to renew the licence and it should have been renewed for a full 15 years but the last minute reprieve and the licence for five years is welcome.
“Many farmers are making a big effort to build up the levels of organic matter in soils by using ground cover crops and “no-till” farming methods, backed up by application of glyphosate. This gives us carbon sequestration, protection from soil erosion and avoidance of water evaporation.
“A de facto ban on glyphosate would have been a shocking and unscientific backward step.
“Farmers would have had to fall back on mechanical weed control. That would mean 25 per cent increase in greenhouse gas emissions and a significant impact on farm bird life – including skylarks, partridge, lapwing.
“For a zero Improvement in public health and safety, we would have been worsening food security, soil quality, biodiversity and climate change.”