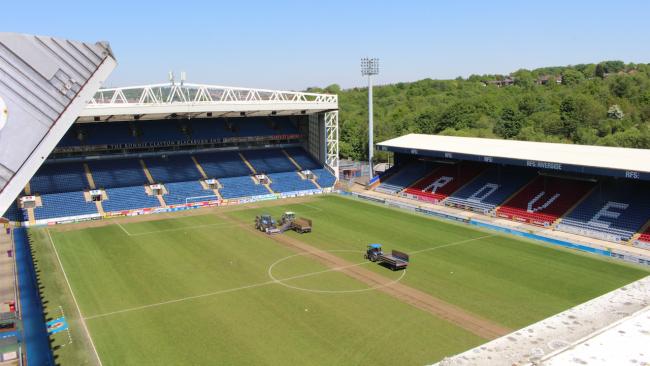 Work Underway At Ewood Park: Work is underway on the pitch at Ewood Park as Rovers prepare for life back in the Championship.

Head groundsman Trevor Wilkin admits preparations for the 2018/19 campaign are well underway and will step up over the next few weeks.

The Ewood groundstaff were highly commended by the EFL for the condition of the pitch during the course of the League One season.

And Wilkins, who has worked for the club for over 35 years, explained the process which will take place over the summer.

He said: “All that’s happening is what we do every season, which is stripping the old turf off, adding some fresh root zone, freshening everything up and reseeding.

“People get it in their head that it’s a brand new pitch, but it’s not. It’s more of a make do and mend job.

“Over the next few days, the old turf will be stripped off, then we’ll get the new root zone on, mix it all together and by the end of the week it should all be levelled and seeded.

“It will then be put to bed for two weeks, then hopefully it should be totally green and ready for me to start cutting again.

“Hopefully we get a decent summer and then we’ll be ready to go from mid to late July.”

Wilkin admits there has been investment from the owners on the pitches at the club’s Senior and Academy training centres at Brockhall with that work also underway.

And he hopes that will bear fruit for the players and coaching staff during the course of the 2018/19 season.

He told the club website: “There’s lots of work going on down at Brockhall as well.

“The owners have spent money on every single pitch this summer, which is great – a good investment.

“Every single pitch at the Senior Training Centre and the Academy is having some work done on it, and that’s the bread and butter for the players.

“We’ll be doing the best we can to produce training pitches as good as Ewood for Tony (Mowbray) and his staff.”

The club were two League One clubs to be highly commended by the EFL for the condition of the pitch, with the overall honours going to Rotherham United.

The rankings are based on marks from referees and away managers, as well as detailed pitch inspections and a review of management operations.

And Wilkin added: “This is a great achievement for everyone involved after what has been a difficult season fixture and weather-wise.

“We had a tough period from late January through to the middle of February, but the winter we had, as everyone knows, was horrendous, plus this season what really hit us was the amount of fixtures we’ve had.

“I think the last league game of the season against Oxford was our 40th fixture here at Ewood, which is an unbelievable number for this stadium, so overall we’re very pleased.”