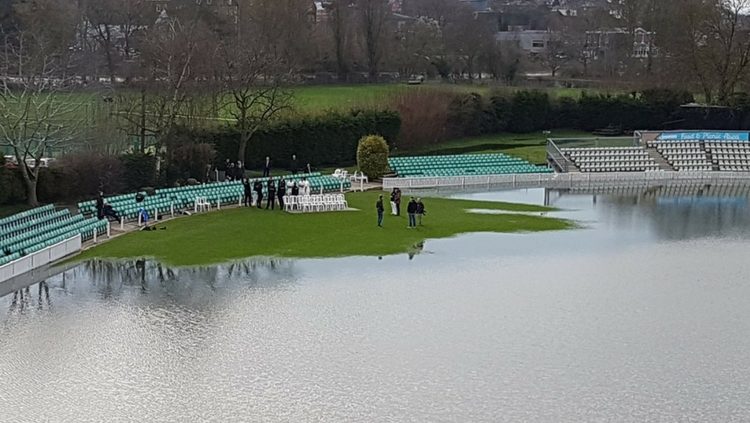 Flood Water Just A “Big Puddle”: Tim Packwood, head groundsman at Worcestershire CCC, has seen plenty of floods during his 29 years on the club’s staff. This one, he says, is just a “big puddle”.

With the county’s first home game of the Championship season just three short weeks away, New Road’s location on a floodplain has come back to haunt the Pears again, with the overflow feeding back across the ground to leave 95 per cent of the outfield lying beneath floodwater up to four feet deep. 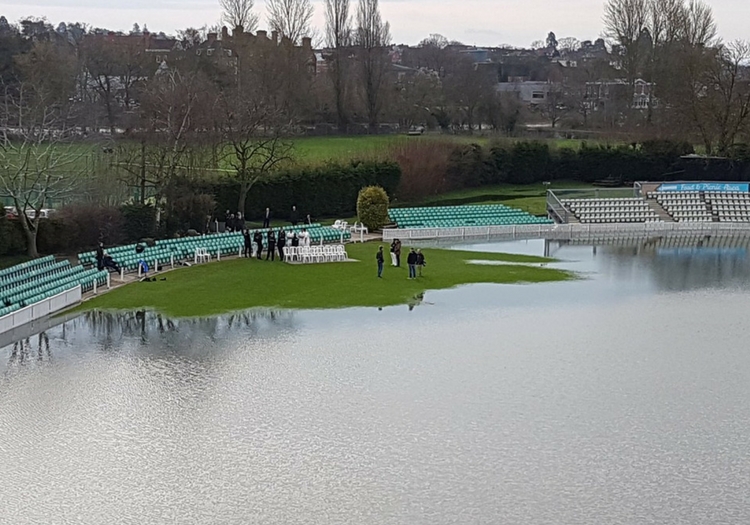 While the sight of his square completely underwater may be familiar to Packwood, to the outside world it remains inconceivable that first-class cricket will be played on one of those very wickets when Nottinghamshire visit in Division One on April 27.

However, the man in charge of getting the ground fit for competitive action is defiant.

“It is a flood but you look at it and as a groundsman you just think of it as a big puddle,” he told The Cricketer on Friday, as he looked out on the flooded outfield.

“That’s how I’d see this compared to most floods.

“The worst ones have had the roads closed and it’s been up over the roof of the marquee.”

The Worcestershire groundstaff need a minimum of two weeks to get the playing surface ready for that opening game, leaving seven days for the outfield to dry up.

Providing there is not an abundance of sediment left on the square, the mop-up job should be fairly routine.

If that is not possible, the match will be relocated to the Worcester Royal Grammar School nearby.

Packwood’s biggest irritation seems to be the hokey-cokey of machinery, which had only emerged from storage earlier in the week before having to be packed up again days later.

“Most of the lads have been on the groundstaff for quite a long time now and they know the floods are one of those things. You can’t do anything about it; if we could stop it we would,” he said.

“You don’t want it at this time of year but I’ve seen many a flood. You build a cricket ground on a floodplain, you take the rough with the smooth.

“As soon as it does start to go up, we’ll be doing our best to make sure we have something ready for April 27. Everybody would still like to make sure the game is still on here.

“It’s entirely down to Mother Nature now. We don’t flood directly from the river, being on the floodplain all the water backs up over the fields and we are the last stop.

“Although the river is starting to drop, it’s got to drop enough for all the ditchwater to go off. It could be done by Sunday, it could even linger around for another week.”

Provided the water subsides, the flood could even benefit Packwood’s preparations, as ridiculous as it sounds, with the weight of water compressing the wicket and aiding in the rolling process.

Still, the clean-up is hardly ideal so close to the new campaign.

Packwood points out, however, that he is not the only one battling the elements in the wake of a winter full of heavy rain and snow.

“Every county groundsman at the moment is working against it. Hats off to every groundsman,” he said.