In what proved a busy two-days at the NEC, following the show’s absence from the 2020 calendar, grounds professionals were eager to learn latest trends and innovations across the sector. 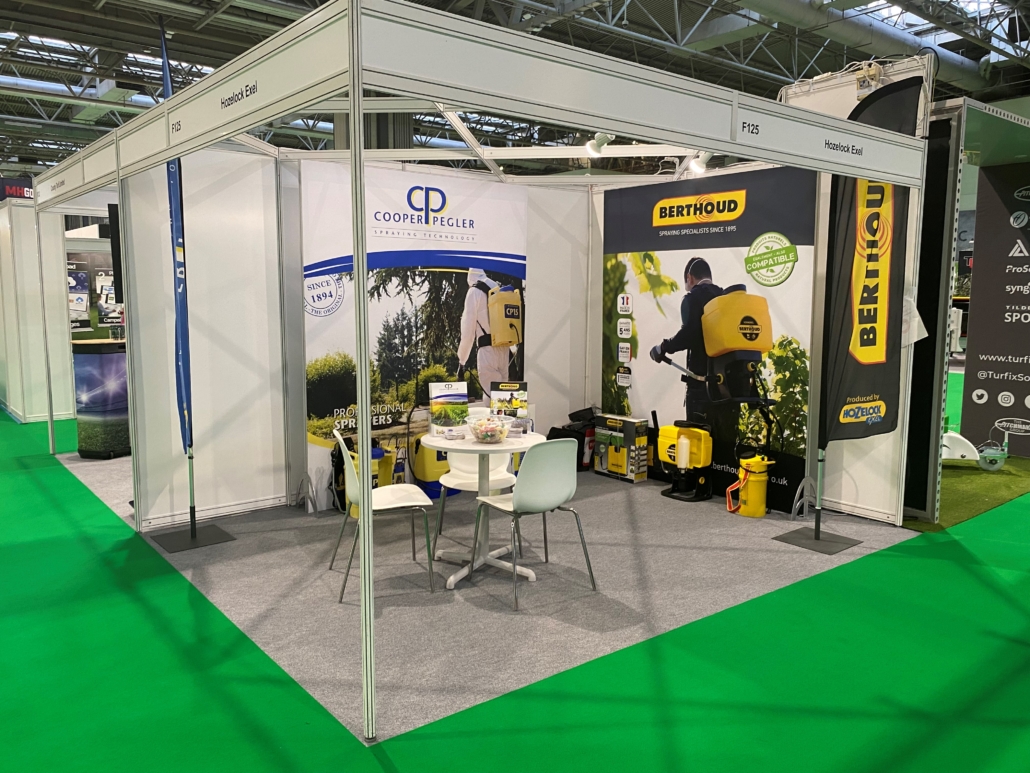 Leading centres like Harper Adams University have adopted the cutaway sprayers as training aids, while training body LANTRA is soon to follow suit as demand grows for operators to know sprayers’ inner workings so they can improve maintenance regimes.

“Moves towards a sustainable, circular groundscare sector are sending messages to private and public sector contractors to improve sprayer lifetime expectancy by moving from a throwaway culture to a more sustainable one,” Allan added after the show.

Operator comfort and safety is also of growing concern among contractors and landscapers, given that operators often put in full-day shifts carrying considerable weight of liquid on their backs.

Berthoud knapsacks all include ergonomically designed upper body support to spread loading away from the shoulders to the waist, reducing risk of long-term postural and spinal distortion.

“Several landscape contractors asked us how they could adapt their existing shoulder-strap cylinder sprayers to redistribute upper body forces,” Allan said. “Clearly the sector is starting to take on board the importance of ergonomic design to longer-term operator health and safety.”

Key visitors during Saltex included Hozelock-Exel dealer Progreen and wholesalers Spindrift Sprayers, who carry a weight of expertise about the Cooper Pegler and Berthoud brands.

“We’re delighted to support our dealer network at the show by promoting two of the UK’s top professional sprayer brands,” Allan added.

Football Focus On The North-West: At Burnley FC’s Barnfield Training Ground, the Premier League club’s first order for John Deere machinery from local dealership Balmers GM has bedded in at what is reportedly Britain’s first football facility of its kind.

The 10ha Barnfield site includes 15 pitches altogether, including four full-size Desso and a 60 x 40m goalkeeper area in the first team zone, plus three and a half full-size Fibresand surfaces and two full-size natural soil pitches (topped up with sand over the years) in the Academy areas. The site also includes a full-size outdoor Desso 3G and indoor Desso 60 x 40m 3G. All pitches are split up into sizes appropriate for different age ranges and all feature full drainage, with Rainbird irrigation systems throughout the site. 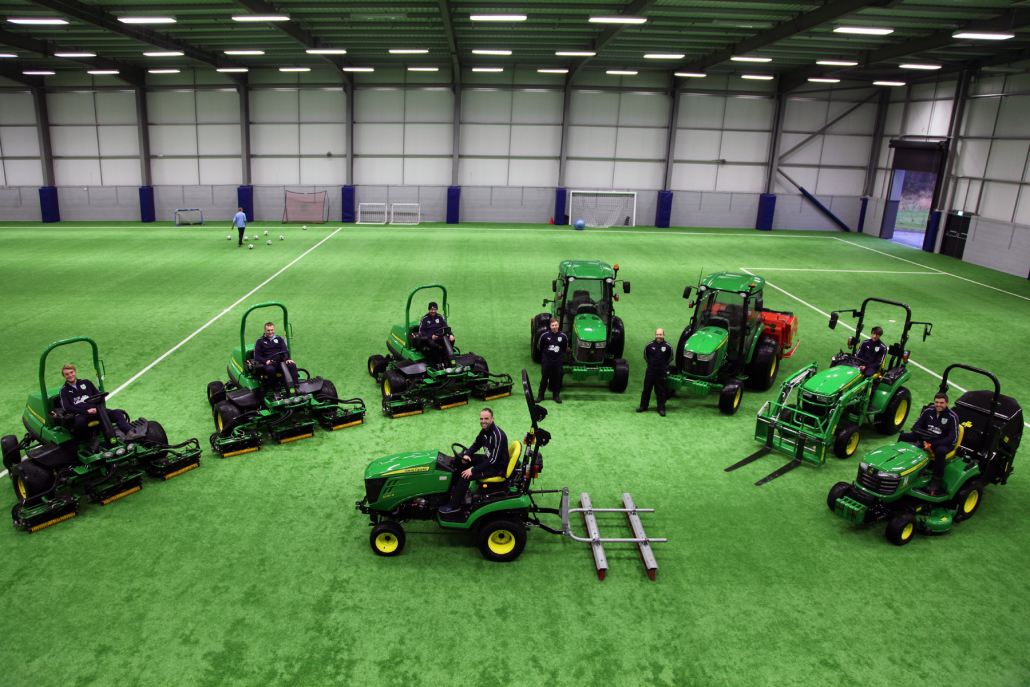 Head groundsman Barry O’Brien leads a nine-strong team and has witnessed plenty of changes in his 11 years here, the latest his own doing. After lengthy spells specifying other major turf machinery brands, Barry thought it was time to try John Deere. Following extensive trials, he specified the equipment required to cope with exacting conditions both outside and indoors.

The new tractor and mower fleet meets fresh demands that are centred on changing turfcare practices at the ground. For example, gone is the early ‘fluffy’ cut after the team fitted different rollers and adopted a more aggressive maintenance regime of raking out and brushing. “We had a grass factory here, generating far too much growth,” says Barry. “It would challenge any kit, but we’re fine now after adapting the way we do things.”

Balmer’s golf & turf area manager Andrew Meeks, whose family are Clarets fans (although he supports Liverpool!), agrees: “We’ve grown with each other over the years, so it was just a question of responding to Barry’s needs and supplying them, while working closely with the team to deliver the results they wanted.” Barry adds: “In doing that, we’ve developed a trusted relationship that has also helped us to expand our knowledge base.”

John Deere’s all-purpose X950R commercial lawn tractor with rear collection has been proving a deal-maker nationally, and Barry O’Brien’s assessment is no exception. “The machine is very good at sucking up pitch debris across the site as well as leaves off our top pitch, which lies next to National Trust woodland,” he says.

“The X950R is one of the best of its kind anywhere, and fits perfectly into the different approaches our grounds team is taking with football pitches – lighter rolling, clearing out and raking. Also, it stands the grass up so that cutting is more effective and reduces the risk of matting. We’d like another one of them, especially fitted with slick tyres.”

Barry also sees the value of his three 7700A PrecisionCut cylinder mowers in this environment. “They serve the football application just as well as they do golf. Obviously the sports differ, but in many ways they lend themselves to similar machinery applications. The customised grass boxes and nylon rollers are also major benefits.”

With Burnley manager Sean Dyche casting an eagle eye over pitch presentation, the last thing needed is turf machinery making the wrong impression. Used for heavier duty tasks such as hauling sprayers and fertiliser spreaders, the John Deere 4049R compact tractor sports Galaxy turf tyres that fit the bill for the bigger pitches, leaving the manager with little cause for complaint. “He loves the softer tyres – they have a big footprint but leave no imprint on the turf,” says Barry.

Additional 1026R and 2036R compact tractors serve as all-rounders, moving indoors to pull drag brushes and other kit that the team uses to maintain the Desso cross-knit pitch. As Barry adds: “It’s not just about the machinery but what you do with the turf between times that allows you to achieve the best results and benefits. That said, I saw the brilliant back-up we were getting from Balmers and the team’s confidence in the kit, and knew the combination would win through.”

ICL Focus On Ecoplug Max At SALTEX: Leading the way in offering the very best in product innovation, visitors to the ICL stand (K030) at SALTEX 2018 will get the opportunity to discover a wide range of solutions. At this year’s exhibition at the NEC, there will be a particular focus on Ecoplug Max, a patented product for tree stump control, which will no doubt draw the attention of attendees.

Ecoplug Max is a patented tree stump control application method which delivers glyphosate directly into the tree stump, killing its root system and preventing re-growth. Each plug contains 300mg of granular glyphosate which are simply placed into holes drilled into the stump using the Ecoplug drill bit. The plugs are then hammered in forcing out the sides of the plug, releasing the glyphosate into the phloem. 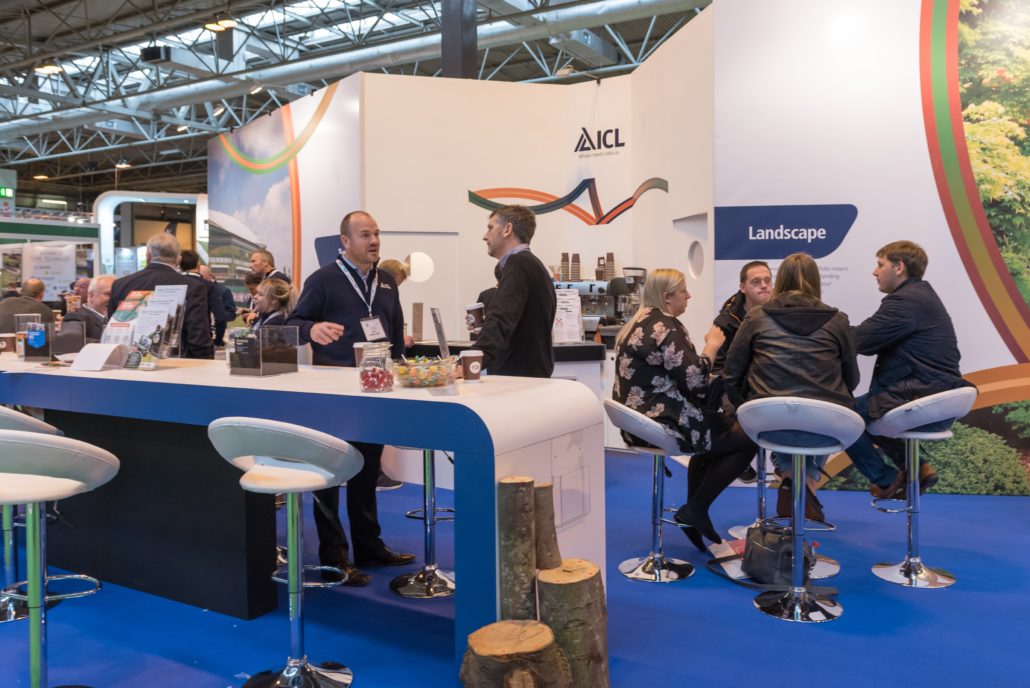 Ecoplug Max supports requirements of the Sustainable Use Directive (SUD) to minimise use of pesticides. With the glyphosate encapsulated inside the unit, it never gets in direct contact with anything else but the plant, minimizing the risk of the operator coming into contact with chemical or chemical spillage. It also eliminates the risk of damage to surrounding trees and vegetation. Quite simply, it stays where it belongs – inside the plant.

Visitors to the stand will also benefit from learning more about the popular Turf Rewards programme which offers all ICL customers the chance to earn points from purchases and convert them into a range of valuable agronomic or educational items. The programme is perfect for golf, sports and amenity turf managers with an extensive range of items on offer such as workplace tools, clothing and work wear, and educational vouchers. Not only does it benefit the turf manager but it is of advantage to the team, the turf, and the organisation they work for by maximising budgets with every purchase.

As well as showcasing their ever-evolving product ranges, the ICL technical team will be on hand at SALTEX to talk all things turf and landscape. The stand will also feature a coffee barista, so whether you are seeking advice on combating diseases, generally looking to improve your turf or landscape areas or have any other questions about your maintenance programmes then ensure that a visit to stand K030 is on your agenda.

Germinal Focus On Disease and Stress Resistant Bentgrass Mixture At BTME: Grass seed and turf care specialists, Germinal, will be showcasing its latest greens-specific seed mixture at the BTME show in Harrogate from 23rd to 25th January 2018.

Designed specifically for use on soil or sand-based golf greens, FOREFRONT GREENS is a blend of three bentgrass varieties, all of which have been selected to offer increased wear and heat tolerance, vigorous growth and good all-round disease resistance for hard-working, modern golf greens. 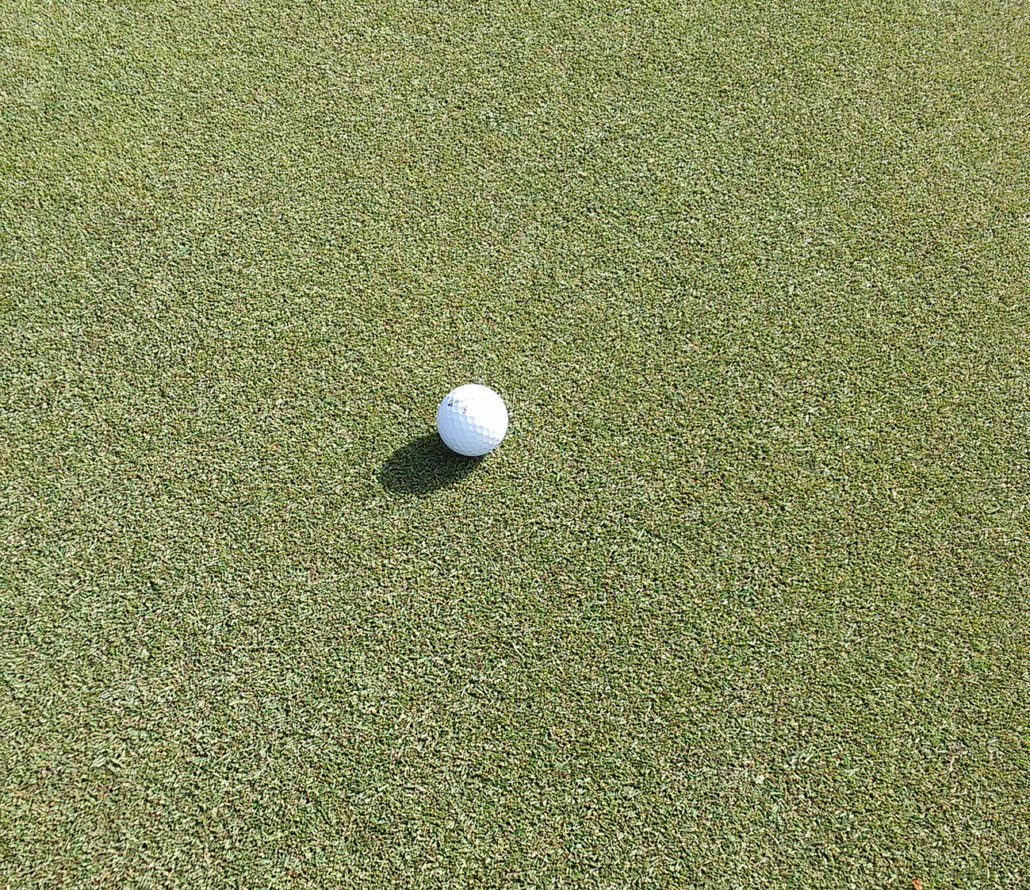 AberRegal and AberRoyal are the latest UK-bred bentgrass cultivars to come out of the IBERS (Institute of Biological, Environmental and Rural Sciences in Aberystwyth) breeding programme: bred from material originally sourced from Kent and west Wales respectively, AberRegal and AberRoyal boast superb disease resistance, particularly to Fusarium, as well as excellent shoot density, fineness of leaf and unrivalled winter and summer greenness.

007 DSB was developed in the US using 24 parent plants to produce a single cultivar with a wide genetic base.  It is this background which enables it to deliver all the qualities of a top-rated Creeping Bentgrass (prostrate growth habit, high shoot density and good wear tolerance) in a range of conditions – from the extreme heat of Morocco to the harsh cold of Western Siberia.

007 has won plaudits wherever it has been used, including Ryder Cup and US Open courses, and has recently been announced as the variety of choice for the greens renovation ahead of the PGA Masters at Wentworth.

“AberRegal, AberRoyal and 007 DSB work well together by providing greenkeepers with a low input seed mixture with improved genetic diversity and a sward with higher resistance to key disease threats such as Red Thread and Fusarium,” explains Richard Brown, Amenity Sales Manager for Germinal.

“As such, Forefront Greens is the perfect solution for progressive greenkeepers who are currently managing browntop bents, but who are seeking extra performance from the same management inputs.  The unique combination of cultivars ensures soil and sand-based golf greens remain verdant throughout the year and, thanks to the inclusion of three top-performing varieties, avoids the risks associated with creating a mono-culture of grasses.”