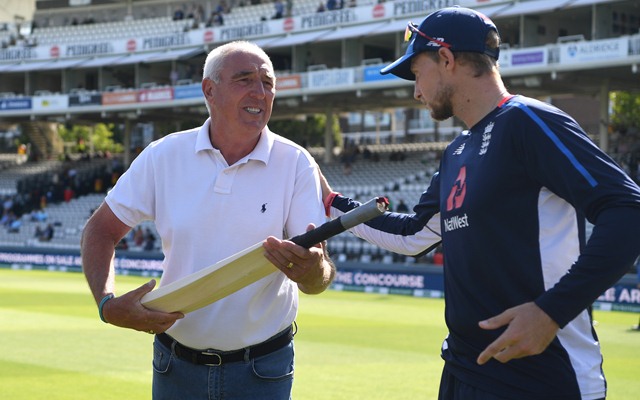 Lord’s Head Groundsman Honoured: After 48 years of service, Lord’s head groundsman Mick Hunt has been recognised by the ECB and MCC for his work, with the MCC also awarding Mick with an honorary lifetime membership.

England recently became the first ever team to complete the milestone of playing 1000 Tests. They celebrated it with a 30-run win over India at Edgbaston in the first Test of the series. Youngster Sam Curran was the top crusader for the English side as they won a humdinger of a contest. As the hosts headed to Lord’s for the second Test, there was another milestone by an Englishman.

For a change, it wasn’t a cricketer but a groundsman. Mick Hunt who has been the Head Groundsman was felicitated for his tremendous 48 years of service. The England skipper Joe Root presented him with an autographed bat at the Home of Cricket. The event took place just moments before play began on Day 3. The Lord’s Cricket Ground handle on Twitter posted a picture of the same.

It was indeed a busy morning for the groundsman. Not because he had a lot of ground related work but that the rewards didn’t stop coming his way. In what was a wonderful gesture by the England Cricket Board, Mick was also awarded the MCC honorary lifetime membership.

The first day at Lord’s was completely washed out. The second day saw just 212 balls being bowled. However, it was enough for the England pacers to bundle the Indian batsmen in overcast conditions. The ball swung like a snake out of James Anderson’s hands and all the bowlers took full advantage of the same. England don’t have a great record at Lord’s recently and they will be looking forward to changing that. They haven’t beaten an Asian team at the ground in their last five instances. 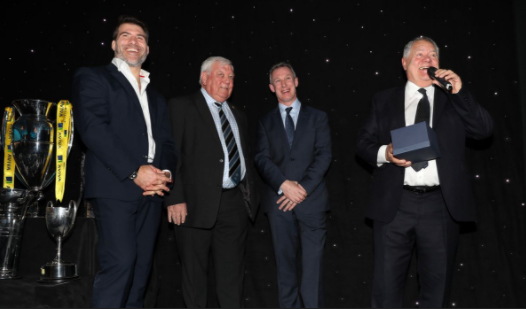 Rugby Groundsman Honoured: The great Bard of Welsh rugby, Max Boyce, was recently honoured at the Rugby Union Writers’ Club in London for his services to rugby.

Farrell beat off the challenges of fellow Lions Maro Itoje, Sam Warburton and Jonathan Davies, as well as Exeter coach Rob Baxter, to carry off the RUWC Pat Marshall award for the rugby personality of the year. Ex-Scotland and Lions lock Weir, currently battling Motor Neurone Disease, won the RUWC Special Award, while Boyce and Harrison picked up tankards for their ‘Services to Rugby’.

Harrison played 655 games for Wharfedale and has spent 40 years on the club committee. Boyce can claim 30 years as president at Glynneath and has been the club groundsman for the past dozen or more years. He recently told Peter Jackson, of the Rugby Paper, about his life-long association with his home town team.

”I played a bit at scrum half for the youth team. I was very small and not very good. I also played at openside. Full of heart but not much pace,” recalled Max, of an era when Glynneath were the powerhouse in second class rugby in Wales and Bas Thomas’ ‘Invincibles’ were in the process of reeling off 55 consecutive wins.

But, as Peter Jackson put it: “There would be no limit to his talent in other directions as a troubadour par excellence with the gold discs and million album sales to prove it. Unable to change the shape of Welsh rugby, he changed the sound instead with his Hymns and Arias brought to a whole new continental audience by the success of the Wales football team at the Euros in France last summer.

“Unlike his constricted playing days, there has never been any limit on Boyce the entertainer, nor on his ability to sharpen new skills in the unlikeliest spheres of expertise. As well as Boyce the bit-part player, miner, musician, comedian, lyricist and perceptive recorder of social history in song, another string has to be added to a very long bow: Boyce the Agronomist.

“His knowledge of grass passes all understanding. His role of honorary groundsman makes him arguably the ultimate one-club man, not that Boyce himself would dare lay claim to such a title. But how many at his age – 74 earlier this season – undertake a job which entails rolled up sleeves and muddied hands?

“Most settle for the less perspiring role as presidential figurehead. The Bard combines his club presidency with the challenging position of groundsman, tackling it with an enthusiasm generated by a lifelong passion for Glynneath and its rugby club.

Max explained where his ‘green fingers’ came from. “A long time ago when I was captain of the local golf club, the committee decided to dig up six greens. I got in touch with the British Turf people and their head agronomist. I didn’t know then what an agronomist was.

“I applied their professional advice to what little knowledge I had at the time to the rugby pitch. It was in a dire state, full of weeds and terrible drainage problems. Often the bottom 20 yards would be under a foot of water.
“Everyone piled in, all twelve of us from all walks of life in a great team effort. We’ve been looking after it now for 20 years. It’s my little hobby and I have to say the standard of pitches in the Championship is pretty good – but not as good as ours. It’s in great nick.”

So, for once, it was Max Boyce the Welsh rugby devotee, rather than Max the great entertainer, who was rewarded for efforts this week. He followed in the footsteps of Treorchy RFC stalwart Bryan James, who was honoured in a similar fashion last year, and received his award from Wale and Lions assistant coach Rob Howley. 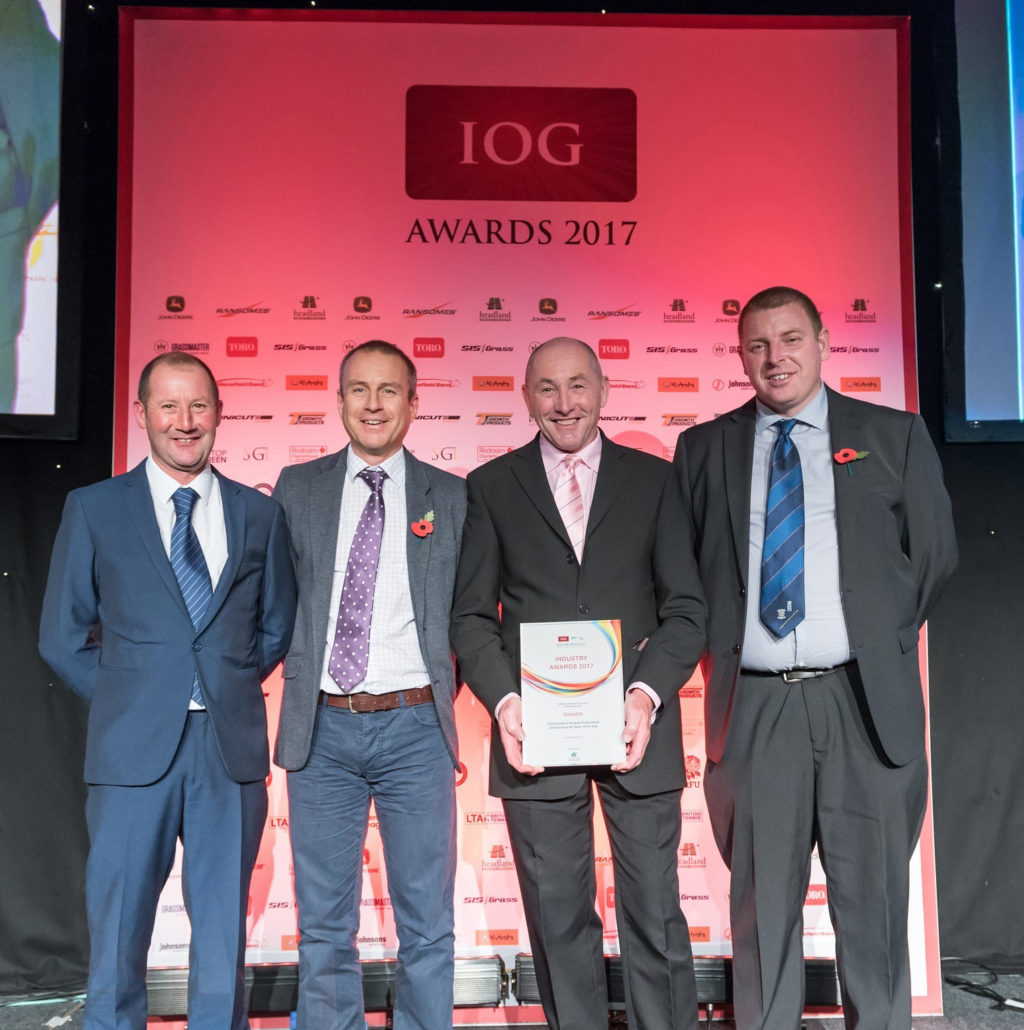 The club won the Headland Amenity Professional Cricket Grounds Team of the Year and head groundsman Vic Demain was named individual Groundsman of the Year.

Both awards were presented at a ceremony at the National Conference Centre, in Birmingham, hosted by Talksport radio presenter Mark Saggers.

The Durham grounds team of four full-timers and one part-timer ensure the Emirates Riverside Stadium pitch is maintained to the level demanded of an international cricket ground.

They keep records of moisture content and hardness of every match pitch, which are forwarded to the ECB so that a data picture is created for every game.

They also compile a daily record of all work undertaken on the pitch, and of daily temperatures and rainfall.

As well as internationals, the ground hosts County Championship, 50-over and T20 fixtures for Durham’s first team, second XI and academy sides, along with other events including rock and pop concerts.

The grounds team is also overseeing development of a new second XI pitch next to the stadium.

Mr Demain said he holds regular meetings with other groundsmen to: “reach out to the local community of groundsmen to help them develop within the industry”.

IOG chief executive Geoff Webb, said: “This year’s awards demonstrate the skills and passion of groundsmanship throughout the UK.

“Winning an award is testament to the dedication of the grounds teams and individuals whose ability to produce and maintain ever-improving playing surfaces, which enables more games to take place, goes largely unnoticed.”