Rigby Taylor Renews Life At Lees Hall GC: When joining 18-hole Lees Hall Golf Club in 2016, Ian Whitehead knew that simply by applying common sense greenkeeping practices – coupled with the right amenity products – he would be able to make a difference. The badly-presented, badly-playing course was effectively “playing second fiddle to the club’s social/bar facilities” and members were drifting away.

Today, part-way through what Ian reckons could be a ten-year programme of improvements to the course, there is a massive turnaround with ‘lost’ members returning and new ones joining – to the extent that over 100 new members have signed up during the past year. 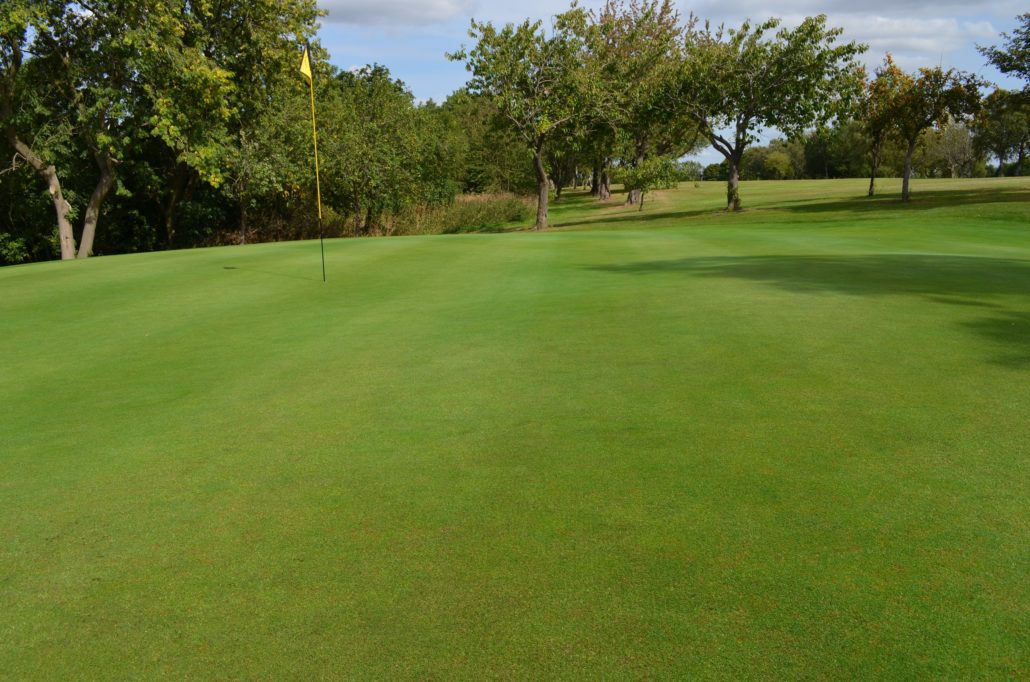 With more than 30 years’ experience of greenkeeping in the Sheffield area, starting on a YTS course at Hallamshire GC, then at Stocksbridge GC before moving to Hillsborough GC as head greenkeeper aged 24 – plus having Levels 2 and 3 accreditations in greenkeeping and Level 3 in management – 48-year-old Ian joined the Sheffield-based club “when the greens chairman wanted someone to help out the greens staff”.

Ian picks up the story: “I immediately saw that with a bit of TLC the course (tees, greens and fairways) could be turned around. So, within a few weeks, I had borrowed the appropriate machinery and I set about double cutting and getting some stripes in. I also instigated a regime of regular scarification and aeration (we’re on clay), and applied fertilsers and topdressing – a normal regime!

“In fact, we’ve applied a lot of topdressing – 80 tonnes last year and more than 100 tonnes this year – and we now also regularly Shockwave and slit the fairways.

“The first thing I did was to double-cut the 1st and 17th tees down to 10 mm – the tees that are in view when you arrive at the course. First impressions count!”

Andy Rossington, the club’s resident professional, and the greens committee could immediately see that what Ian was doing was working and they were very supportive by for example, investing in a number of new machines “that have made a big difference, including new mowers for the tees, greens and semi-rough areas”.

As a result, Ian was appointed head greenkeeper four months later, in November 2016. “That gave me a full winter to get everything organised and ‘tidied up’ ready for the new season. We’re now in the second season and we’re getting there!”

Support was not only forthcoming from the greens committee and Andy. Over a number of years Ian has worked with Rigby Taylor’s Technical Representative Mike Brear, who had put together programmes of treatments to benefit the courses Ian had worked on. 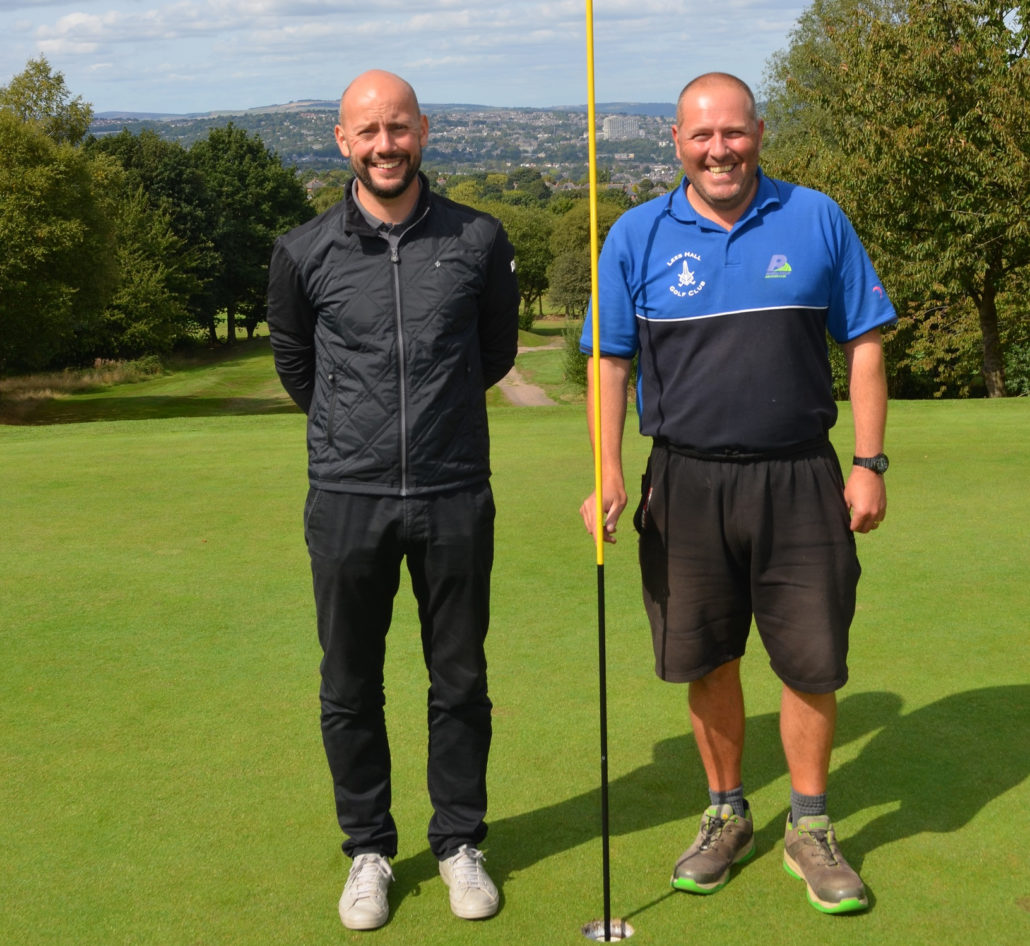 “To an extent, I simply followed that programme here,” says Ian. “But these were old push-up greens and I didn’t want to ‘open them up’ too soon and too quickly, so I took a measured approach during the first season, waiting until the course looked a bit ‘tired’. Also, being north facing, this parkland course battles all the elements and in the spring suffers relatively slow growth rates.

Now, Ian applies his full Rigby Taylor programme, and he particularly highlights the Breaker Biolinks wetting agent which is applied six times a year as an indispensable product for Dry Patch prevention and root generation.

“These products have never let me down in the past,” adds Ian, “and I see no reason why they will now.”

He concludes: “There’s still a lot to do, especially with thatch levels on the greens and approaches, as well as work to the bunkers and the drainage, plus to the trees that shade many of the greens and tees. I think the approaches alone will take three to four years to get them where I want them. But I’m already seeing massive improvements in the fairways (through slitting).

“My goal is to make this the leading golf club in Sheffield, and with the backing of the committee and the members plus the continued technical support from Rigby Taylor, there is no reason why this can’t be the case.”

The last word is with Andy Rossington, the resident pro: “It’s no exaggeration to say that before Ian’s input, the first green here resembled the moon – it was desperate! But news of the improvements to the course has travelled, as is reflected in the boost to membership.

“Importantly, too, the greenkeeping team as a whole can now be proud of what they are achieving. Everyone here agrees with that, especially the golfers.”

Lees Hall In Sheffield Is The Latest Golf Club To Purchase A Ventrac 4500: Lees Hall Golf Club is the latest purchaser of a Ventrac 4500 compact tractor and attachments. Situated three miles south of Sheffield, it was designed by Alex Herd, the Open Champion of 1902, and opened in 1907 as a 9-hole course. It was remodelled to 18-holes in 1911 creating a 6,171 yard, par 71 parkland course with commanding views over the city.

Ian Whitehead is the Head Greenkeeper and heads a team of four dedicated greenkeepers. He has been in the job for 16 months, having previously been Course Manager at Hillsborough Golf Club for 23 years. 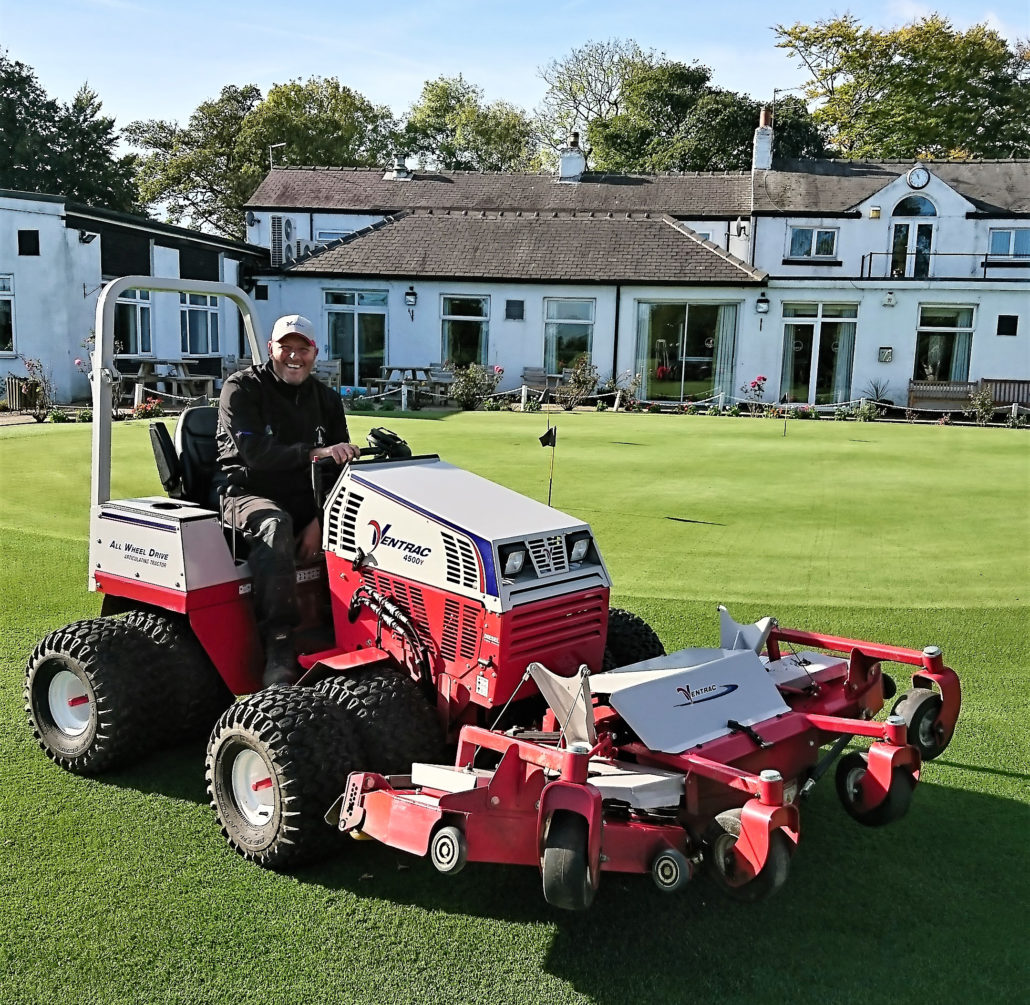 “I’m really lucky to have a very supportive committee with the president and greens chairman putting their trust in me and providing the funds to help with my suggested improvement programme. It’s no secret that the course has been in decline for some years, but I see this as a challenge. We’ve implemented some immediate improvements and the members are making the right comments. We have upgraded various machines including a greens mower, tees mower and a greens iron.

“However, the purchase of the Ventrac 4500 from local dealer, Russells Groundcare, has been the real bonus. It’s a powerful, multi-purpose compact tractor on which you put many attachments. Glen Sawyer of Russells recommended it to me and I trust his judgement. We had a demonstration and it was a no-brainer; we had to have it. We had intensive operator training when it was delivered so everyone can get the maximum out of it.

“Like other recent purchasers of Ventrac, I was sceptical when I first saw the machine, it’s a bit quirky, but once you’ve sat on it you realise it’s a powerful and versatile tractor, very smooth to drive and the articulating Contour mower deck leaves a great finish. Its hill climbing is excellent and that’s a prime consideration here.

“We’re already looking at other attachments as we prepare our 2018 budget. There’s so much that this single machine can do with its selection of accessories which include a Tough Cut deck, Stump Grinder, Edger, Blower and more. I’m really excited about this machine and the challenge ahead; the perception of the club is already changing in the local area and membership is moving in the right direction. Good greenkeeping practices and the equipment to carry them out are essential. With the continued support of the club, we’ll get there.