Leicester Groundsman Cuts Club Crest Into Centre Circle. Current Premier League champions Leicester are preparing to hand over their trophy to Chelsea this weekend, but when it comes to pitch designs, the Foxes are still riding high at the top. 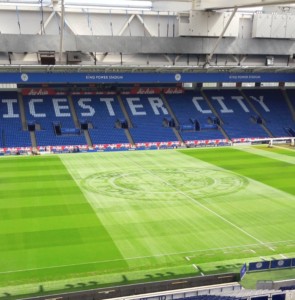 Craig Shakespeare’s side travel to Manchester City this weekend, but they still have two fixtures remaining at the King Power Stadium – starting with Tottenham on May 18 before the visit of Bournemouth three days later.

With their Premier League status secured courtesy of the 3-0 victory over Watford last weekend, the Midlands club can enjoy their final three games this season with their sights set on a top-half finish.

But while Shakespeare puts his squad through their paces at their Belvoir Drive training base, the club’s groundsmen have been busy perfecting  their latest design at the home ground.

Leicester’s performance against the Hornets last Saturday was every bit as immaculate as the playing surface, with an eye-catching design from chief groundsman John Ledwidge receiving plaudits for the state of the pitch heading into the summer break.

The club have developed a reputation for entertaining their opponents on surfaces akin to a bowling green, with the designs on show during last season’s surge to their first domestic league title catching the eye just as much as the side’s displays.

Having acknowledged the praise for his circular-themed offering against WalterMazzarri’s side, Ledwidge has taken his love for pitch patterns to the next level – by fashioning the club

Ledwidge and his team were hosting New Ground Technology for a European Stadium and Safety Management Association (ESSMA) workshop on Wednesday, and the Leicester groundsmanager was eager to use the equipment out on the pitch. 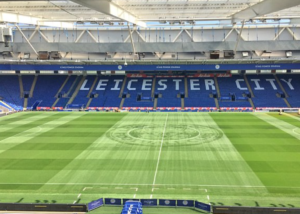 After several hours of careful trimming, the ‘Van Gogh of football pitches’ revealed his latest masterpiece, with the intricate details of the club’s circular crest, complete with the face of a fox and ‘Leicester City Football Club’, cut into the surface.

The Foxes will soon be dethroned as Premier League champions, but the club appear determined to end the season with the accolade for Grounds Team of the Year.

Aston Villa scooped the award last season despite relegation to the Championship, but Leicester – along with Arsenal, Manchester City and Tottenham were highly recommended.