Delivered by local dealer, Farols, the package included a Ventrac 4500 all-terrain compact tractor in dual-wheel configuration, a Contour mowing deck, Trencher and Power Broom and will be used to maintain their new world-class training centre of at Seagrave in Leicestershire. 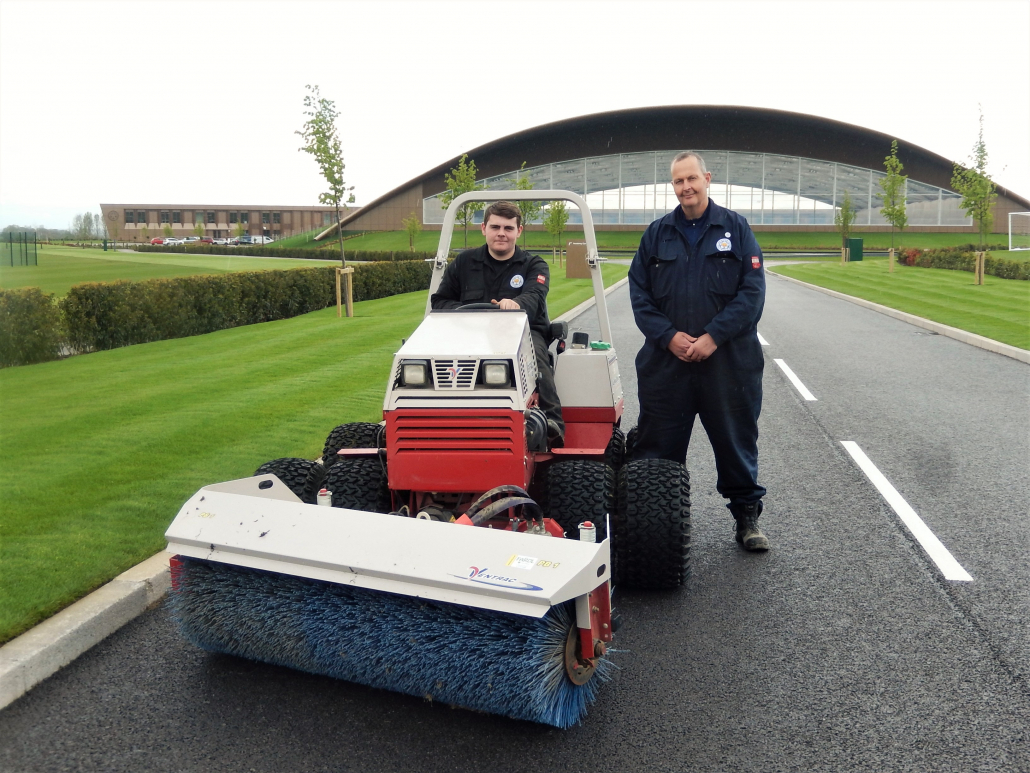 Following a demonstration earlier this year and with input from his team, John Ledwidge, Head of Sports Turf and Grounds at the Premier League club, specified the purchase.  He is an integral part of the team that has developed the world-class training facility, where he oversees the management and development of the 180-acre site. This includes the equivalent of 14 turf pitches, synthetic pitches, a 9-hole golf course and the world’s first dedicated Sports Turf Academy.

Commenting on the latest addition to the machinery fleet, he said,

“Our owner is passionate about this football club and the community we share. He wants the very best and this facility demonstrates that commitment. We all share his vision and our aim is to make this the premier training centre in Europe.

“To be fair, we took a lot of our inspiration from the exceptional job Darren Baldwin has done at Tottenham’s facility, where we first saw the Ventrac in action during the research phase of the plan. I’d also seen it at various trade fairs and in the media. We needed a machine that was highly versatile, that can help us here improve a site that’s going to be constantly evolving over the next five years.

“The Contour deck helps us maintain the numerous banks and sloped areas around the complex, including ‘Mount Vardy’, the nickname we’ve given to a landscaped area of unused spoil from the original build. It is also used on the golf course where its articulated design prevents scalping. We’ve used the Trencher to insert drainage bands in some particularly wet areas of the golf course and the Power Broom does a great job on the pathways and carparks. It’s all about quality presentation and the versatility of the Ventrac helps us achieve the high standards demanded here.”

Chris Minton is the club’s Head Mechanic, supervising a team of three in the state-of-the-art Maintenance Facility located within the Sports Turf Academy building. Commenting on the Ventrac he said, “It’s a very good and impressive piece of kit; robustly constructed and powerful, considering it has a sub-25 hp engine. It’s simple to work on, all the belts are easily accessible as are the greasing points and the flip-up decks make our job easier when we need to access the blades or blade spindles. Definitely a very good addition to our fleet.”

John began his career in 2002 as an apprentice groundsman at Coventry City where, at the tender age of 19, he was promoted to Deputy Head Groundsman. In 2008 he was appointed Assistant Grounds Manager at Aston Villa and 18 months later returned to Coventry to take up the Head Groundsman role, where he was responsible for directing pitch preparations for the London 2012 Olympics at the City of Coventry Stadium (now the Ricoh Arena).

Following the much-publicised issues at Coventry during this time, he then joined Ricoh Arena in the role of Grounds Manager and in 2014 was successful when he applied for Head Groundsman’s position at Leicester City. In 2016 he was promoted to Grounds Manager and then in July 2019 he took up his current role as Head of Sports Turf and Grounds, where he leads a team of 52 staff working across multiple sites and is actively involved in the ongoing development and investment in the class-leading sports turf surfaces at the club. 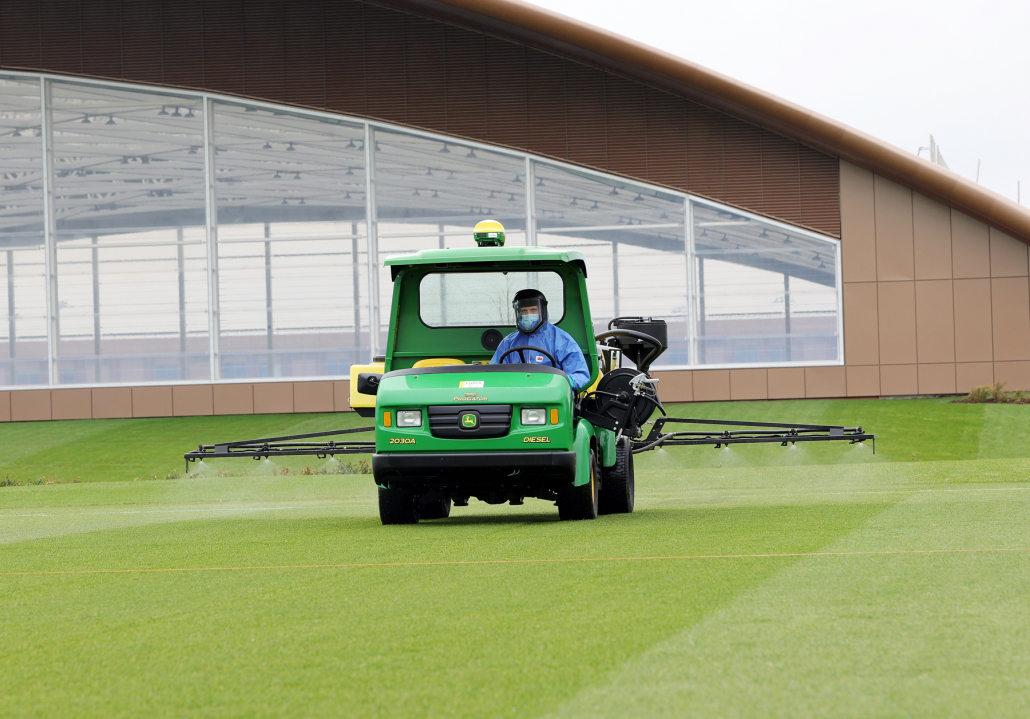 The GPS PrecisionSprayer uses satellite technology and mobile RTK (real-time kinematic) navigation down to accuracy levels of 2.5cm to allow users to create reliable spray coverage maps. It also captures all spray data and analyses the results, which streamlines documentation and provides robust analytics for recording and legislation purposes.

John Ledwidge, Head of Sports Turf & Grounds at Leicester City Football Club, bought the first of these new machines to be delivered to a non-golf customer in the UK, from John Deere dealer Farol.

“There were many reasons for choosing the sprayer, the chief one being accuracy,” says John. “We are creating a world-class facility at our new training ground and we aspire to be world-class in the way we operate.

“Adopting this new precision technology will help in our aim to be as efficient and environmentally sustainable as possible in everything we do. The John Deere GPS PrecisionSprayer means we can apply exactly what is required without overspraying or overspending.”

Simon Gibson, head groundsman, says he switched to Toro because he wanted more precise control: “We conducted a side-by-side trial with Toro at the stadium and straight away the even distribution the Infinitys produced was evident. You could see the consistent moisture curtain from the beginning to the very end.” 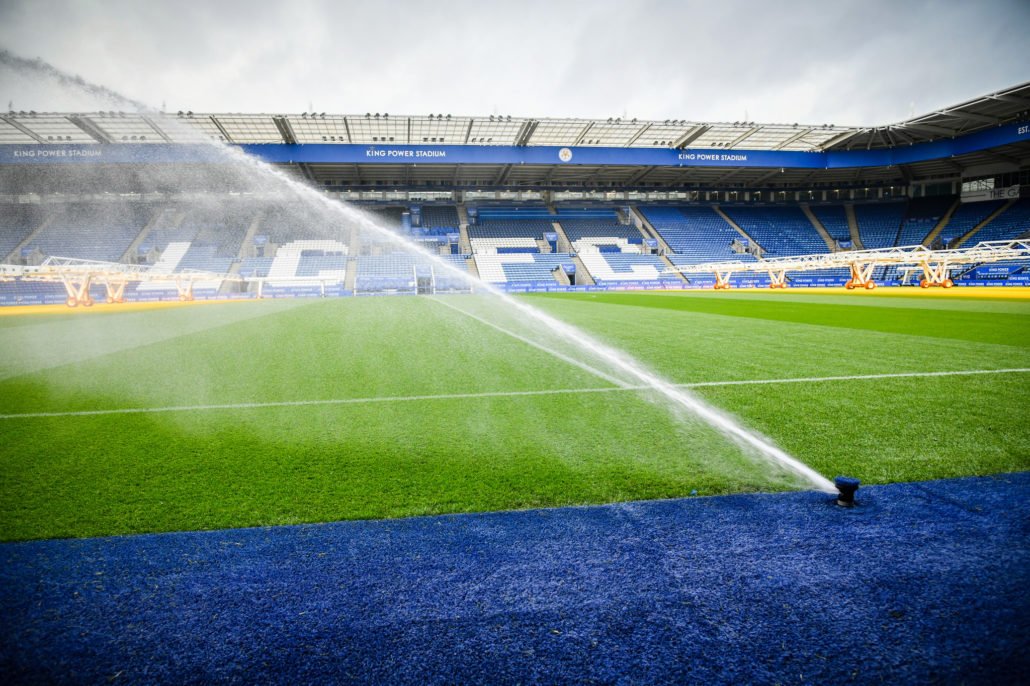 Simon decided on 10 Infinity sprinklers but instead of placing them into the pitch, he put them into the 4G tracking run-off areas in stacked up irrigation boxes covered with blue astroturf. He says: “The sprinklers can’t be seen when they’re not in use and it means the pitch is 100 percent grass. The boxes aren’t filled, we simply lift the lid to access the whole unit.”

Another major advantage Simon and the team are finding is the control for spot watering. He says: “We like to keep the goal area drier than the rest of the pitch. With the Toro sprinklers and the slip clutch feature you can manually position the sprinkler where you want it without damaging the pop-up. Now on match day when we set the irrigation on, we send a member of the team round to spin the sprinkler out of the direction of the goal area. It’s great to be able to do that and have that level of control.”

Simon has had Turf Guard placed onto all four corners of the pitch and linked it to the Lynx control system. He says: “By having Turf Guard in all corners means we have a more accurate picture of what the moisture content is through the profile. It allows us to detect the dry areas before they impact on the turf’s health and prevent overwatering. It’s taken away so much of the guesswork.”

Simon has been more than impressed with the Lynx system, like so many, for its ease of use and accuracy. There is only thing he’s now waiting on and that’s a radio licence to enable direct access with the system on match days: “When there are 35,000 people on the Wifi and 4G, the service gets overloaded. We have applied for a radio licence and that will let us bypass the issue.”

With the irrigation of the pitch safely in Toro’s hands we wondered what’s next on the cards at the King Power Stadium for Simon, who has been with the club now for 20 seasons. “I always relate my time at the club by seasons,” he laughs. “Plans for the next couple of years are to reconstruct the irrigation system pipework to enable us to put TS90 sprinklers in the middle of the pitch. The configuration of the existing pipes meant we couldn’t go for this option this time and while the T7 sprinklers are brilliant once the pipe configuration has been updated it will allow us to install Toro’s ultimate infield sprinkler, the TS90. We’ll have turf cups of course and will grow the grass in a pot at the beginning of the season and then drop it into the cup so it will be a seamless playing surface.”

There seems to be a great deal of pressure on all grounds team come the start of each season, and Simon says that’s a situation that never changes: “Expectations for sports surfaces are always high and the pressure for the best surface possible only ever increases. Toro irrigation delivers on everything you ask for. You’ve got to get the best results and you do with Toro.” 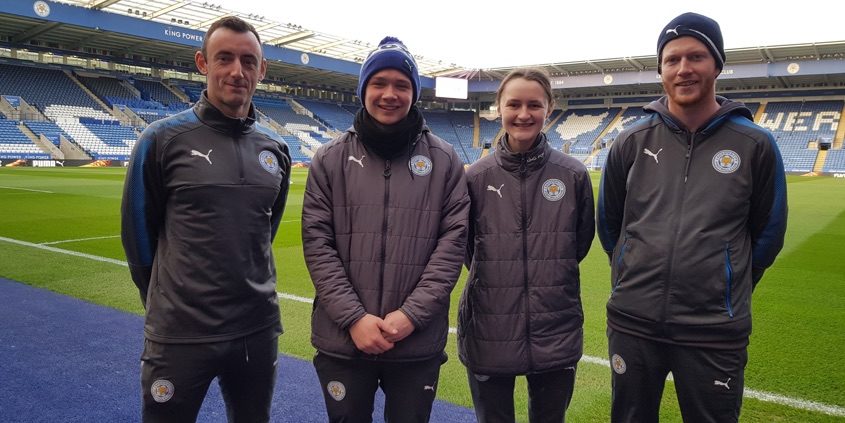 The implementation of the Apprenticeships Levy has seen the club invest heavily in the recruitment of new apprentices and also taken the chance to upskill existing staff to a higher level of competency. 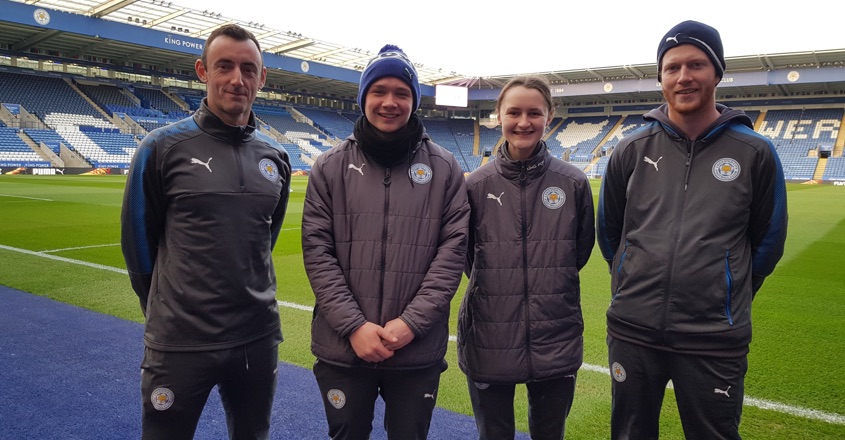 As part of National Apprenticeship Week, we caught up with the team as they prepared the stadium pitch for an FA Cup fixture. As part of the day we also allowed Leah, Josh and Ryan the chance to explain why they chose an apprenticeship and what skills they are developing.

As part of their apprenticeship Josh, Leah and Ryan will learn a wide range of skills, and rotate across sites also working at the Belvoir Drive training complex. This ensures their experiences are as varied as possible as they learn the complexities of the job. They’re supported with regular college tutor visits, technical workshops and access to a sophisticated e-portfolio and virtual learning environment, where they can log their training and complete any associated knowledge assignments. Myerscough has a proven track record in apprenticeship delivery and this blended approach has delivered significant success over the past decade.

Grounds Manager at Leicester City, John Ledwidge, shares his vision for the award winning team, and the need to be at the forefront of learning, innovation and technology: “For us it’s always about a team effort. It’s vital that we maintain our playing surfaces to the highest standards possible and we embrace any innovation technologies that allow is to achieve this. Apprenticeships allow us the chance to recruit new workers into our team and to shape their training to our model of excellence. The Apprenticeships Levy has allowed us to now enroll seven members of our team onto apprenticeship programmes at level 2 and level 3.

‘’We have also recently recruited three new team members straight onto apprenticeships. This is a significant investment from the club and allows us for succession planning and internal team development. Myerscough College come highly recommended and we look forward to seeing our apprentices develop. We have exciting plans for the future and hope our new apprentices play a big part in our future success.”

Employer Services Manager at Myerscough College shares his thoughts on recruiting apprentices: “We assist employers across the country to recruit and train apprentices. It’s fantastic that Leicester City have chosen us as their sportsturf apprenticeships provider and I am looking forward to seeing the journey the apprentices make as they develop in their new roles.

‘’If any employers are unsure about Apprenticeships, or the recruitment process, then they can get in touch with our expert Employer Services Team who will support them every step of the way. This service is completely free of charge to all businesses choosing Myerscough College as their Apprenticeships provider.”