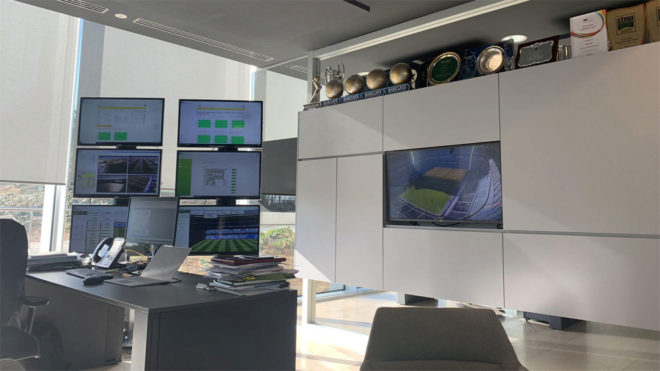 Real Madrid Groundsman’s Office: Paul Burgess, the man responsible maintaining Real Madrid’s pitch, recently took to social media posting an image of his office with the message: “Preparing our summer planning today for the stadium and training facility, busy 2019 ahead.”

Formerly in charge of the pitches at Arsenal, his modern techniques were taken on by all of the Premier League teams. Then in 2009, Real Madrid brought him to the Spanish capital to take charge of the Santiago Bernabeu turf.

In the image, posted by Burgess, you can see the awards received during his time in England, in an office which contains some of the best technology to help pamper the pitch for Madrid. 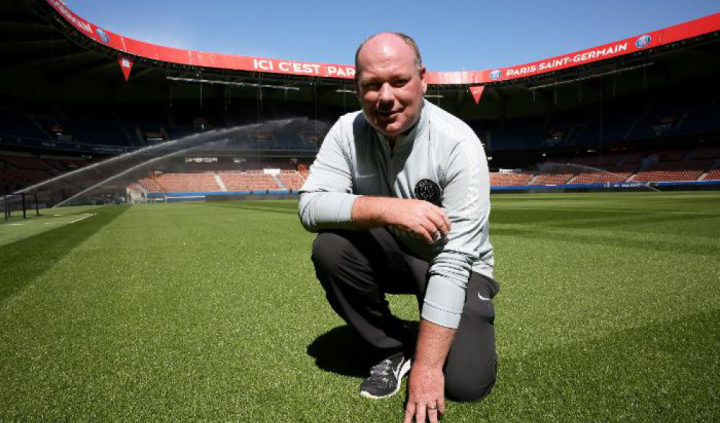 Real Madrid need no introduction having won the Champions League a record 13 times, including winning it the previous two seasons, as well as having a team full of world class stars headed by Cristiano Ronaldo, arguably the best player in the world. 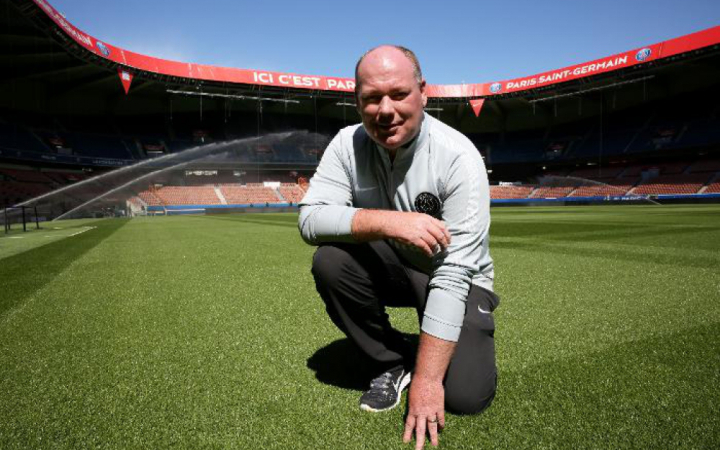 PSG meanwhile strive to reach the levels of Madrid and plan to do so with large transfer fee’s. Backed by Qatari investment they have blown away the record transfer fee by prizing Neymar away from Barcelona in the summer for £200 million pounds.

Joining him was Kylian Mbappe for £165 million with the permanent deal to go through in the summer. Therefore, the thought of two global giants of the game going head to head enticed most fans of the beautiful game to watch the game at the Parc De Princes.

However, beneath the big transfer fee’s and glamour players a huge part of both side’s recent successes is down to two men who made unlikely moves to both clubs.

Jonathan Calderwood has been PSG’s groundsman since 2013, joining from Premier League club Aston Villa, while Paul Burgess has been in charge of the Bernabeu’s pitch since 2009; having previously been at Arsenal.

Both men have won the Groundsman of the year award while in England but have different stories on their way to the two European giants.

Calderwood left his home country of Northern Ireland at the young age of 17 to study Turf Science & Sports Ground Management’ at Myerscough College for 3-years. After that he became the deputy head groundsman at the old Wembley. Eventually, he became the head groundsman at the home of English football overseeing it’s final four years; before he was forced to move on as the FA announced plans for the new Wembley which was opened seven years later.

This led to Calderwood moving to the Midlands, spending a year at Wolverhampton Wanderers before joining Aston Villa in 2002. As Grounds Manager at the club, he was responsible for not only the Villa Park pitch, but also the club’s training ground Bodymoor Heath.

During his 11-year spell at Villa Park, Calderwood was named Groundsman of the Year twice as well as gaining a number of other awards for his work on the turf. One man who was impressed with his work was Gerard Houillier, who managed Villa during the 2010-11 season before leaving due to health issues.

Despite the Frenchman only being there a year Calderwood had clearly made his mark on him, because when PSG started to look for a new groundsman Houiller recommended the Villa man.

When then PSG manager Carlo Ancelotti backed this up the French club set out to get their man, in their aim to have the best pitch as well as the best players. Calderwood is in charge of the Parc De Princess pitch, as well as the club’s training and academy pitches.
He is also tasked with flying out to America at the end of every season as well to make sure that the pitch the club play’s on in the following pre-season is up to scratch.
Calderwood has certainly made an impact in Paris, but it was Burgess who was the first Premier League groundsman to earn a move aboard.

The year was 2009 and Real Madrid was in a bleak period of it’s history. They had won the La Liga title. They had just lost the La Liga title to Pep Guardiola’s all conquering Barcelona and had not won the Champions League since 2002.

However, the start of the 2009-10 brought optimism around the club. Florentino Perez had taken over as president again, splashing big on Ronaldo and Kaka in a quest to regain the title.

While this did fail, there was a small bit of success at Madrid that season due to Burgess. The Bernabeu pitch had been criticised season’s prior and was blamed for injuries to players.

When Inter Milan and Bayern Munich stepped out of the pitch for that seasons Champions League final however, it was spectacular with criticism a thing of the distant past.

This was the main reason why the Spanish giants had recruited Burgess. The Englishmen began his groundsman career by doing work experience at his local club Blackpool, before joining Arsenal in 1996 at the age of 18.

He then became head groundsman at the Gunners previous ground Highbury four years later. While at Arsenal he won the Groundsman of the Year award three times, leading to Madrid swooping in for him.

Like Calderwood at PSG, Burgess is highly rated at Madrid and is also required to scout out the pitches where the club is due to play it’s pre-season games. In 2014, with the club set to travel to Morocco to take part in the 2014 FIFA Club World Cup, they sent Burgess to inspect the pitch.

Burgess was not impressed with the pitch at the Prince Moulay Abdellah Stadium where Madrid played four matches. Due to this the club chose to arrive two days before their first game, so they could fit in an extra training session at their own Valdebebas training ground.

Burgess’s advice worked as Madrid went on to win the tournament. Madrid will be aiming to compete in the tournament again this December but must win the Champions League for a third time in a row to qualify.

Last night’s 2-1 win over PSG saw them progress to the quarter finals. However, it has been a season of disappointment with the club thirteen points behind Barcelona in La Liga. As for PSG, they look set for fifth Ligue 1 title in six seasons (they are fourteen points clear at the top), but the Champions League is the prize they want most and will be disappointed with not progressing very far in the competition.

Regardless of the team’s form though, their pitches will always be winners thanks to the work of Calderwood and Burgess. 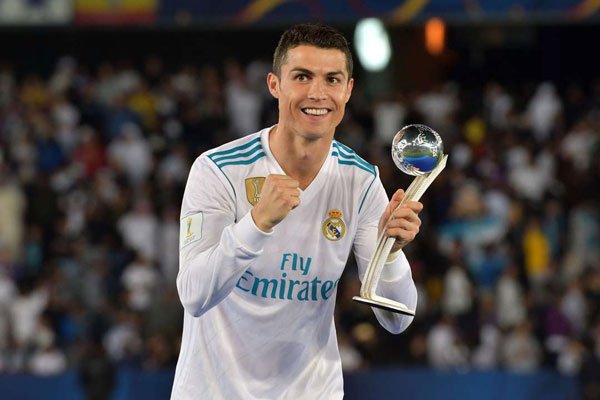 Madrid Demand Best Of Groundsman: “The expectations of Real Madrid are to have the best,” they could easily be the words from a famous player or coach, but it is instead the club’s groundsman Paul Burgess who is reflecting on the demanding culture at the Spanish club.

However, he is used to dealing with that pressure having been lured to Real in Galatico style in 2009 after winning Premier League groundsman of the year three times in 12 years at Arsenal.

“Real Madrid and Spain is like the dream move for anybody whether it be the groundsman, the footballer or the press officer,” Burgess told AFP on a cold and grey Madrid morning with preparations for the Clasico in full swing.

“That’ll be the sunniest place in Madrid today,” he added pointing to the rows of high-powered lights beaming down on one side of a pitch that has to cope with plus 40 degree heat in summer and freezing temperatures in winter.

“For El Clasico there is obviously more build-up, more cameras on the side of the pitch, everyone is talking about it so there is more pressure from the outside.”

A two-week layoff since Real’s last home game, though, has ensured Burgess’s best work will be on show for the big day.

“Going into El Clasico we’ve got a two-week build up, the conditions look pretty good so the pitch will be in great condition not only for Real Madrid but also for Barcelona. It will be a nice pitch and the best team will win.”

The best team in recent times has tended to be Madrid, who have won five trophies in a calendar year in 2017 for the first time in the club’s storied history.

“100 percent,” joked the affable 39-year-old when quizzed as to how much success is down to him. “I think the pitch certainly adds value, but the bottom line is the pitch is the same for both teams and it is down to the team to perform on the day. We do our best to give them what they want.”

Unlike Real’s star names and faces, though, Burgess tends to only get the criticism when things go wrong rather than acclaim as the trophies roll in.

“The only time I get feedback is if there is a problem. That is the correct way. I don’t go round looking for compliments, I don’t say to Cristiano (Ronaldo) ‘nice goal’. That’s his job and my job is to produce a good surface.”

He recalls a “tough” conversation with Jose Mourinho on the eve of the Portuguese’s first match in charge in 2010 due to a summer “outbreak of disease”.

However, the importance of a perfect pitch isn’t just reflected in how good it looks on TV, but can be vital in keeping multi-million euro players fit.

“They are paying serious money for these guys and they want them playing football, not injured. Something like 80 percent of injuries are non-contact with another player, so the only contact is with the grass.

“That doesn’t mean 80 percent of injuries are the fault of the grass, it could be bad diet, fatigue, but certainly a percentage is down to the pitch so it is very important we have dialogue between the medical department and my department to try and create consistent, comfortable surfaces for them to play on.”

That desire to stop avoidable injuries has seen Burgess travel the world looking at the latest technologies to bring back to the Bernabeu and Madrid’s vast Valdebebas training complex.

“I’m always trying to be a bit of a pioneer in my industry. By doing that you do make mistakes as well, but you try to be at the forefront of any new technology and Real Madrid reap the rewards of that.

“They invest in that, they should be applauded for what they are doing. They want to be the best and want to do everything they can to be the best.”
Just like for players and coaches, that investment brings increased pressure.

“When you are working for a big club it is more extreme. If we win it is the best thing in the world, if we lose it’s a disaster.

“I’m just part of that, but we have more good days than bad days and that’s the important thing.”