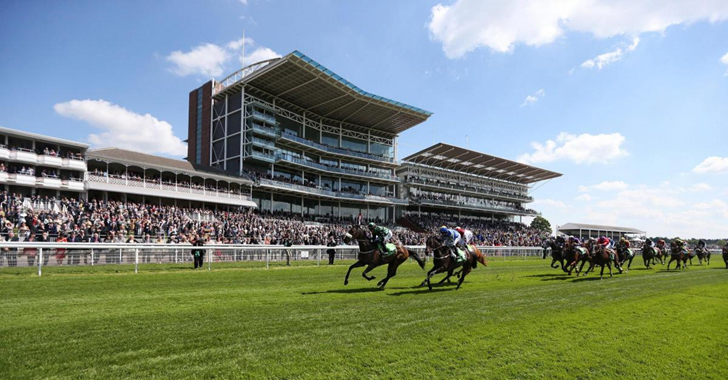 There is some debate about which sporting turf suffers the greatest damage when hosting the particular event for which it has been so lovingly prepared.

Rugby Union has a case to be made, with 16 men mountains pushing against each other in modern day scrums, exerting tonnes of pressure onto the turf. Motocross is another, while cross country running, with

a huge eld of competitors on a wet day, leaves quite an impression. But there is one sport, and one event in particular, which undoubtedly comes out on top in the damage to turf stakes.

The Cheltenham Festival is hands-down the winner, and Head Groundsman, Ben Hastie, is the man who has to watch turf, he has spent 12 months lovingly nurturing, being churned up on a scale which would have most turf professionals breaking out in a cold sweat and seeking out the nearest padded cell.

And no, I’m not talking about the turf which braces itself for the influx of thousands of beer-drinking punters to the Guinness Village. Although the shortest routes to the various bars do take quite a pounding.

Ben and his team ensure that the 28 races over the four days of the Festival take place on track which is as safe, and aesthetically pleasing, as is possible. With an average of 120 horses each day, every one equipped with four legs and four mighty hooves, on ground which can range from fast and rm to good soft and, soft and heavy, it’s certainly no easy task.

“I would say that horses, given the weight and speed that they are travelling, cause more damage to turf than in other sports,” said Ben, as we spoke a month, before the Festival.

“We can have the course looking absolutely perfect and just one horse running round can make it look like a churned eld. Last year we had ground which was soft, heavy in places and the hoof prints were going in literally a foot. It is hard work for the horses but hard work for us too to get the track back in shape for the next race,” said Ben, recalling the meeting which took place in the middle of the Beast from the East, about which more later.

So, how does the Cheltenham team ensure that the stage – watched by 70,000 visitors each day and many millions more on television screens across the world and often described as “The Greatest Show on Turf” – is at its best for each one of the races?

“Our racing season starts with a meeting in October but prior to that I’ve already identified an area of saved ground for every bit of the track which then doesn’t get run on until the Festival. It means the ground we use at the Festival in March hasn’t been run on for a whole year. If we experience poor conditions we also have the option of moving the rail to protect ground, something which we can do here because, like the likes of Aintree and Ascot, we are bigger than most courses and our track is wider,” said Ben.

“In terms of stability that is a massive help to us, while we make good use of germination sheets to attract a bit more light and heat to specific areas. We are also constantly seeding and over-seeding when conditions allow while we have a system which allows us to pre-germinate to get the seed to ‘chit’ a little bit earlier to get it advanced from where it would be normally. We nd that is a big help.”

The team is also road testing lighting rigs, specifically for the winners’ enclosure.

“The enclosure sits behind the stand and while that’s ok in the summer when the sun is high, during the Festival it doesn’t get sunlight and heat. After each race the rst four come into the winners’ enclosure with the rest going to the unsaddling enclosure, which has an astroturf surface so

we don’t need to worry about that. However, the winners’ enclosure is turf and with four horses for each of the 28 races having buckets of water thrown over them to cool down and walking around trampling the soaking wet turf we do struggle with it. So

we are testing the lighting rigs to see if this will help improve this area.

“We are constantly thinking about what we can do to help weak areas. We are a winter sport and the sun is just not high enough to make a difference when we need it. Fences never move and the take off and landing areas tend to get a lot of damage so trying to get these areas to come back when soil temperatures are very low is a bit of an issue. That’s the reason we have the saved ground,” he explained.

There are 16 racing days a year at Cheltenham but the racecourse is never quiet with something on most days, ranging from pony racing to music festivals – complete with campers – and charity runs.

As to the race days themselves they are full on with a race every half an hour, split across the two courses – the Old and the New – the New generally hosts the steeplechase races and the Old the hurdle races.

To cope, Ben’s regular team of 12 is in ated considerably for regular race meetings and even more so for the Festival.

“I have a team of 50 treaders, supplied by an outside contractor, which goes out with forks and treads in each hoof print, ipping it back and making it as level as possible. The team splits up around the course into groups of two or three and they each cover around 100 yards of track until they arrive at where the next team started.

and seed and ll every single hoof print created that day. The job is usually nished in the morning because of lack of light. In some conditions you get hooves going in up to a foot, theseThe holes are lled with soil so the horses for the next races have a level playing eld. It’s so important for the safety to horse and rider.

“Sometimes we will use a ring roller and roll in front of the team pushing some of the divots back into place to give them a bit of a hand but generally it’s all done with their feet and a fork.”

For a regular meeting, Ben marshals a staff of between 90 and 100, while at the Festival this grows to around 130.

“During the Festival we bring in teams from other racecourses including Aintree, Nottingham, Warwick and Wincanton. It’s really good for the guys from the smaller courses as it allows them to see how a big event is run, but it is also great for me because I know that they know what they are doing because they do the job every single day. They are a massive help for me. We are a big area and I need eyes and ears everywhere,” said Ben, who added that three weeks after the Festival he and some of his team go and help out at Aintree for the Grand National.

So, in many ways, for the week of the Festival Ben is in a similar position to a Golf Course Manager during The Open Championship or at the Ryder Cup when there is an army of people to manage.

“I won’t be able to speak with every one of them every day but we have a briefing meeting at the beginning of the week and the treaders are split into teams of 10 with a team leader for each and I speak with them. “I have a really good Assistant

Head, Tim Fewster, and he works closely with all the teams. Even when the ground conditions are really good there is still plenty of work to be done looking after the fences and the like. During a race many things can happen, when I’m in other areas of the course so I rely of them to be able to resolve any issues which might come up.”

A Festival day for Ben begins at 5.30am when he meets Clerk of the Course, Simon Claisse, and between them they walk the course, checking for any going changes and discussing any other issues which may need resolving before racing begins.

“I’m then managing the guys and making sure jobs are being before I go to bed I’m thinking about what I need to do the next day. I’m a bit of a geek when it comes to it,” said Ben, who started as a golf greenkeeper at Cherwell Edge Golf Club in Banbury before moving to Kirtklington Golf Club before a chance to take his love of horse racing into his professional life when a job came up at Cheltenham.

Racing is a close kit society and Ben is a regular at the Head Groundsman Seminars which bring them all together on a regular basis. “I get on really well with the other Head Groundsmen. We are having a seminar at Sandown next week and a day at Wimbledon where Neil (Stubley) will be looking after us.”

In many ways the difference between Head Groundsman at Flat and National Hunt courses are much greater than those of links Course Managers and parkland Course Managers in golf, and in more ways than the at guys can carry out their day to day work in shorts and the National Hunt guys in thermals.

“In summer we don’t irrigate at all while at courses are being irrigated constantly because they want to produce safe ground. We don’t have
any horses running in summer so we don’t need to worry about the going. We actually want to let the course crack in the summer so that it self aerates

and lets the roots go a bit deeper in search of water. It also means that we keep our water supply for when we need it from October onwards.”

There is another real plus as well for Ben and the team. “It also means that we can all get our holidays during the summer!” Speaking with Ben he doesn’t need

to mention, although he does, that he gets up every morning with a spring in his step, never failing to look forward to what work is going to bring him that day. He is genuinely someone for whom you feel believes he has one of the best jobs in the world.

“In terms of National Hunt we are the biggest course in the country, if not the world, and from that point of view there is no other job I’d rather have.

“During the Festival we’re in the papers all the time and we will have 70,000 people each day and many more on TV and I do think that I’ve had a large part to play in making it happen.

“When we get positive comments about the track, how it looks and how it rides, it makes me and the team hugely proud of what we have achieved.” And so they should as, after all, it is “The Greatest Show on Turf”.