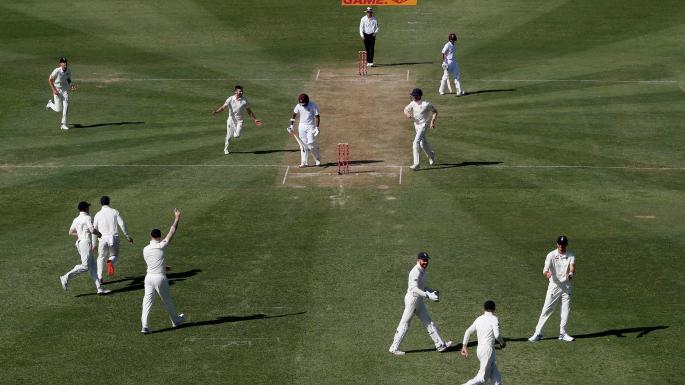 Groundsman Creates ‘Starburst’ Outfield: TV viewers watching the latest test match at the Darren Sammy stadium in Gros Islet may have been struck by the unusual way the outfield has been cut, mown into the shape of a “starburst” fanning out from the pitch to the boundary. This sort of topiary appears to be unique to international cricket but then the man behind it is a one-off too.

Kent Crafton has been groundsman since the stadium was completed in 2002 and for the last six years he has acted as head curator for the whole Caribbean region. He is widely credited with having transformed pitches from “roads” on which batsmen filled their boots to the livelier surfaces that have revived local pace bowling and, in this series, left England’s batsmen hopping.

That is only Crafton’s day job. Manicuring the grass at his home ground is his real passion. During the women’s World Twenty20 in November, he went to extraordinary lengths by creating a Hibiscus shape with his mower.

During this match, a member of Crafton’s groundstaff can be seen walking across the outfield each evening with a paintbrush and tin, dabbing whitewash marks along the edges of each section to help Crafton be precise with his daily cut. Under ICC regulations, the outfield is given a light cut on each day of a Test match.

The outfield for this game has been unusually slow. This is because of the thick type of conch grass on the island but it may also have something to do with Crafton needing thicker-than-normal grass to create his patterns.

Anyone who gets between him and his artwork does so at their peril. A few years ago, in the build-up to a Test match, he severed through a 200-metre TV cable that happened to be lying across part of the outfield. He was not noticeably apologetic. “He has his own kingdom,” said one source.

There is, moreover, another problem taking up any matter with him: Crafton has an identical twin called Alton, who works as a development coach at Gros Islet. It has not been uncommon for people to think they are speaking to one of them, when in fact it is the other.