The countdown has started: Turf Matters catches up with Alan MacDonnell, who in six years time will join the elite club of turf managers who have prepared a Ryder Cup course.

Adare Manor has been chosen to host the 2027 Ryder Cup with the County Limerick club being the second Irish golf club after The K Club, in County Kildare in 2006. 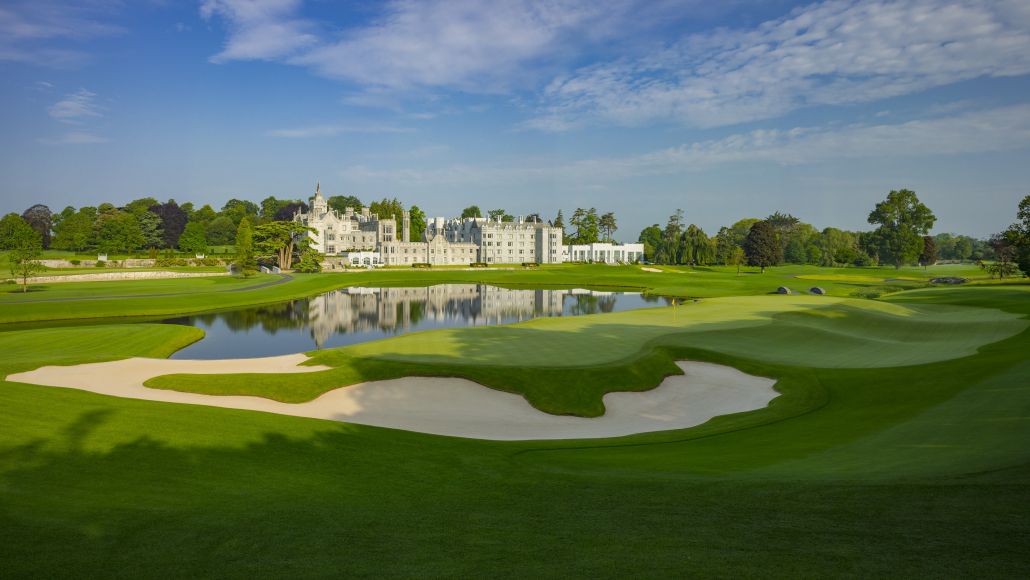 While it is over six year away there is one man who is sure to use every day of the time between now and the Opening Ceremony to ensure the course is fit to match the occasion.

For Course Superintendent Alan MacDonnell the Ryder Cup will the be the culmination of many years hard work and preparation.

Alan took some time out to chat with Turf Matters about what the Ryder Cup meant to him and his team and the work that has already gone on and what is still to be carried out.

Turf Matters will follow Alan’s progress between now and 2027 and report on the various milestones along the way.

Turf Matters: How did you get into greenkeeping and to your current role at Adare Manor?

Alan MacDonnell: My career was meant to be something totally different – I was destined to follow in my father’s footsteps and become a member of the An Garda Siochana (The Irish Police Force) but my interest in golf started at a very young age and I was one of the very few children in our school in Kilgarvan Co. Kerry who used to play golf.

I played and very much enjoyed golf at my local course Kenmare Golf Club and further afield in Ceann Sibeal Golf Links in Dingle with my father and my brother. In fact, my first ‘paying’ summer work was on the golf course in Kenmare.

A job I loved, and it became in some ways my second career as I later turned down the opportunity to join the An Garda Siochana to pursue a greenkeeping career.

I studied Golf Course Management at Harper Adams in the UK for three years and part of my studies was a placement at Adare Manor, that was 22 years ago. I came as an intern, learnt my trade and was fortunate enough to rise through the ranks here at Adare Manor.

TM: Can you give a little insight into the nature of the golf course – strengths, signature holes etc?

AM: The course was originally a Robert Trent Jones Snr course which opened in 1995 and was redesigned in 2016 by Tom Fazio.

Set on an 840 acre estate The Golf Course at Adare Manor is a par-72 measuring 7509 yards off the back tees. The desire is that we produce firm and fast surfaces and offer superior levels of presentation for our members and guests.

The design is very much a classical design with two loops of nine and the 1st tee, 9th green, 10th tee and 18th green all within a pitching wedge of each other.

The front nine is very much anchored by a 15 acre lake which also acts as our irrigation reservoir. Water is again in play on the back nine where the River Maigue comes in to play on four holes. 14 of the 18 greens have elevated putting surfaces with Bent Grass surrounds which in my opinion is one of the standout features of the course; subtle but elevated putting surfaces with devilish surrounds that run as fast as some of the greens is probably the course’s greatest defence.

The premium is on accuracy of the second or third shot to the greens. During the construction 500,000 m2 of material was moved around the site to help to transform the fairways from a relatively flat terrain to being somewhat undulating.

The whole site has been sand-capped which assists in helping us produce the firmness that we desire. The course is wall to wall maintained grass with the highest height of cut being 25mm.

My favourite hole is the 9th which is a 633 yard, par-5 with an elevated green and Bent Grass surround that is like no other on the course. With regards to our signature hole, the 18th receives a lot of plaudits, again a par-5 with a real risk and reward factor, and of course the Manor House offers a stunning back drop.

While the course in its original or in its present incarnation is still relatively new – you never get that sense at Adare Manor. The old world ‘feel’ which is created in some sense by the Manor House itself is further accentuated by the matureness of the trees on the golf course/estate and the hand cut stone boundary walls and bridges.

TM: What grasses do you have on the course?

AM: The fairways and roughs are Dwarf Perennial Ryegrass with Creeping Bent putting surfaces and surrounds. We have a little bit of Tall Fescues in the extreme out of play areas to offer as a colour contrast. In total we have over the years put in eight different varieties of Perennial Ryegrass, each chosen for its different characteristic, be that wear tolerance, shade tolerance, colour or fineness of leaf.

With regards to the Bent Grass we have Pure Distinction putting greens and Penn A4 surrounds.

TM: Very few Golf Course Superintendents have had the opportunity to prepare a course for a Ryder Cup. What were your initial feelings when you won the bid?

AM: I would be lying if I said myself and the team weren’t a little bit daunted by the challenge when it was first announced – excitement coupled with trepidation and the realisation that the biggest show in golf was coming to Adare Manor.

Once the excitement of the announcement abated, we began to focus on the programme of works and what we would need to do to truly successfully host such a prestigious event. There is not a day that goes by without a mention of the Ryder Cup from a member of the team. It is truly an honour to be here at Adare and to have such a huge sporting event in the calendar.

TM: Although the Ryder Cup is still a number of years away, how do you pace your course reconstruction work and generally working towards September 2027?

AM: We are, of course, fortunate that the course was reconstructed with the hosting of major golf events in mind and the Tom Fazio design team have vast experience in creating golf courses for such events.

So, the requirement or need for change is small. One of the key components of hosting the Ryder Cup is the size of the gallery and the requirement to move such large crowds around the course quickly, safely and at ease. With this in mind, particular emphasis is being placed on increasing our drainage on the ‘off golf’ areas, increasing our sand-cap on the entire site by 75mm over the next six years and widening some pinch points on the golf course.

Our normal agronomic practices will not change hugely – we are constantly monitoring the performance of the greens and surrounds, and we keep a close eye on our organic matter percentages, hydraulic conductivity etc to ensure we stay within specifications and we adjust our programmes accordingly.

TM: Have you been working closely with the European Tour in what needs to be done to make the course the perfect Ryder Cup/match play venue?

TM: Have any previous Ryder Cup Course Managers/ Superintendents been in touch with you as yet with advice and will you be seeking them out closer to the time?

AM: Yes, indeed there have been many phone calls, text messages and emails from various Ryder Cup Golf Course Superintendents offering supporting words and wisdom. While I may not know some of them personally, it is a great honour to get such calls and messages from my peers. As the 2027 event draws nearer, I will indeed be leaning more and more on these peers for advice and input on the different scenarios that may face the team and I. 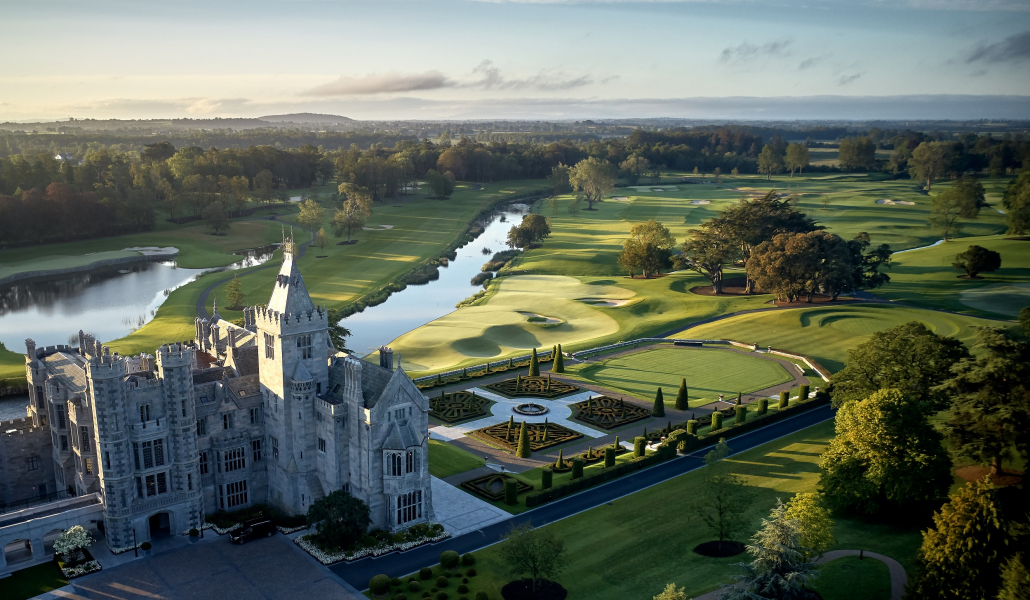 TM: Can you talk a little about the major projects which will be carried out on the course before 2027?

AM: A lot of the projects that we will be undertaking will be primarily to assist with people movement and allowing space for infrastructure to be erected, hospitality areas, grandstands and the like.

With regards to changes to the course these will be small, and this is testament to the work that was put in during the rebuild. There are no major changes planned for the course itself.

TM: To facilitate a major tournament, I expect you will build a larger team than usual. How do you manage such a large team and unique operation out on the course, is there anything you will do differently with the team before the Ryder Cup to prepare?

AM: Here at Adare Manor, we have a large, committed team, some of whom have been onsite for 25 years.

What our team brings to the course is dedication, desire and knowledge and with this we strive to give them ownership and responsibility. The Ryder Cup, like any major event, will require many volunteers and since the announcement there have been many messages from willing people looking to be involved and assist with the event, messages from Ireland, the UK, Europe and from the US.

A bit like the Ryder Cup itself we intend on putting a programme in place for our staff and volunteers that will reflect the quality of the course and the matches being played. 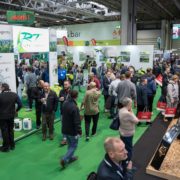 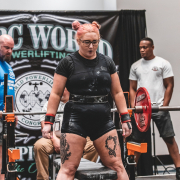 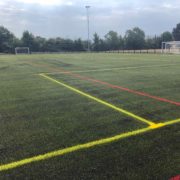 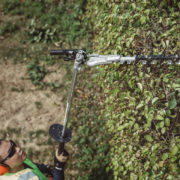 Reach For The Top With Echo 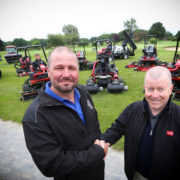 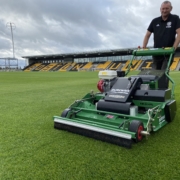 PRO 34R perfect for the Pilgrims 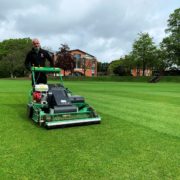