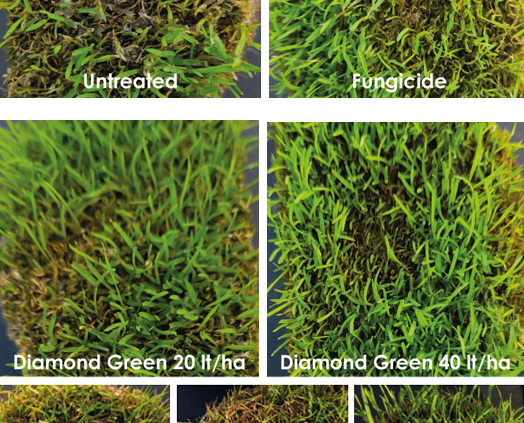 Diamond Green – Continuation of Product Trials: Indigrow developed Diamond Green as a liquid fertiliser based on potassium, calcium and magnesium. It contains essential plant oils to enhance plant health and increase disease resistance in turf grass. The combination of nutrients in Diamond Green improves the plants natural resistance to many known pathogens. 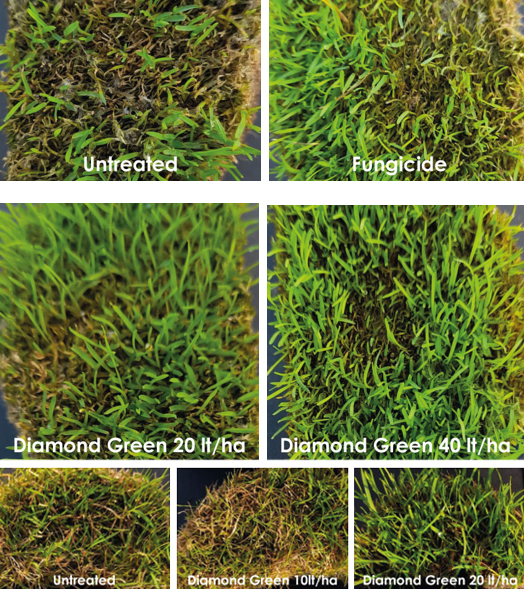 Throughout the trials, our aim was to find our the effectiveness Diamond Green had of different turf grass diseases without killing the fungus. As Diamond Green is a fertiliser with additives, it was important for us to show how this formulation would prevent the spread of the fungus within the cores taken from the parkland golf course.

The following treatments were tested for their potential to reduce disease spread in already infected turf stands:

The turf cores were harvested for each treatment, one infected with Fusarium Patch and one infected with Red Thread. The cores were then sprayed with each treatment until the turf surface was fully covered. The treated turf was then sealed in clear boxes to provide the humidity conducive to active disease spread. The development of the disease and the health of the turf was then monitored over the next 4-5 days.

Over a period of 4 days, the active Fusarium had spread freely on the untreated turf core and white, active mycelium was observed. The fungicide treatment has suppressed the spread of Fusarium, but there is still a small amount of active mycelium present.

At 10 lt/ha, Diamond Green has supressed the spread of Fusarium, but like the fungicide there is still a small amount of active mycelium present.

At both 20 and 40 lt/ha, Diamond Green has not only supressed the spread of Fusarium but allowed the turf to start to fill in disease scarred areas of turf. There is only a very small amount of active mycelium present on the turf

Over a period of 5 days, the active Red Thread has spread freely on the untreated turf core and active red areas can be observed.

At only 10 lt/ha, Diamond Green has had a limited impact on disease spread. However, at 20 lt/ha, the Red Thread has been almost completely suppressed and the turf has had a noticeable green up response and there is an obvious increase in growth rate.

This confirms that it is the systemic acquired resistance within the plant that stops the spread of the disease. 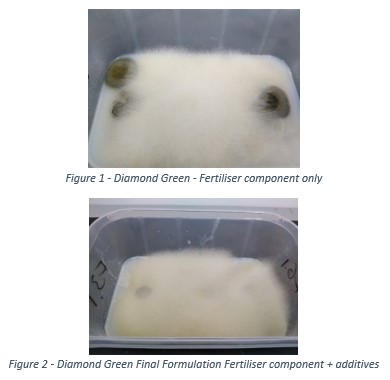 As Diamond Green acts as a trigger to the plants natural defences, rather than having a direct effect on the fungus itself, it is safe to assume that the activity shown here on Fusarium and Red Thread would be similar on other turf grass diseases including: Anthracnose, Dollar Spot, Snow Moulds and Leaf Spot.

At higher application rates of Diamond Green, the treatment also produces a strong growth response, with turf able to quickly ‘fill in’ previously diseased/scarred areas. Although this trial was only observational, we have a strong indication that Diamond Green can play a vital role as part of an integrated disease management strategy. With the benefits to turf health (shown by increased growth response and improved colour), we predict that turf treated with Diamond Green will have improved resistance to future disease attack. 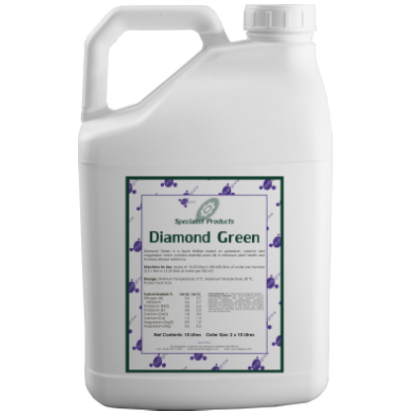 New Product – Diamond Green: As more and more fungicides are withdrawn from sale across the UK, Europe and globally, turf managers have had to look for alternative methods to manage turf diseases.

One of the most common ways turf managers can achieve this is by using more natural or organic products, along with managing available nutrient levels in the soil profile. Ensuring that plants have enough of each of the important macro and micro nutrients as well as using natural well known plant health products like chitosan (Asset Chitosan) have led to reduced disease pressure in many circumstances.

As well as the macro and micro nutrients, Diamond Green also contains essential plant oils which further enhance plant health and the ability of the turf grass plant to resist disease pressure. The latest research undertaken has proven that these essential plant oils have shown to slow the progress of the growth of the pathogen by increasing the plants natural resistance to the disease.

All of these benefits to the turf grass plant help to improve the plants natural resistance to many known pathogens.

Disease prevention agents, like Diamond Green, should be partnered with traditional nutritional products as part of an effective turf management strategy. Diamond Green should be applied before anticipated disease pressure to achieve optimum results.

More information on our trials work is available from our technical team – if you are interested in further information, please contact us using: growth@indigrow.com